Chapter 20: Rise of the Red Guards

Chapter 20
Rise of the Red Guards

Peng Zhen had been State Chairman Liu Shaoqi’s most powerful supporter. With him gone, Liu was now vulnerable, and at Mao’s mercy.

The Politburo also released a statement that had been prepared under Mao’s personal supervision, strongly implying that enemies of the Communist Party had infiltrated the Party. It claimed that these class enemies “wave the red flag to oppose the red flag,” and it prescribed “the telescope and microscope of Mao Zedong Thought” to identify these people. Which of course could be found in Mao’s Little Red Book, which he had made sure was published a few years earlier.

This statement gave a green light to Mao loyalists. And with the Beijing Communist Party in disarray after the dismissal of Peng Zhen, chaos was about to break out in the capital of China.

This chaos erupted nine days later, on May 25, 1966, at Peking University in Beijing. In fact, Peking University came to be known as the epicenter of the Cultural Revolution. The rumbling began when the head of the Philosophy department, Nie Yuanzi, authored a big-character poster that attacked the university’s Communist Party administration.

Big-character posters had been used since the Qing Dynasty. They are handwritten posters using large characters with artistic calligraphy, that are mounted on walls for public display. They’re generally used for propaganda purposes, or for protest.

Nie’s poster had been encouraged by the wife of a Mao loyalist, but it’s suspected that Jiang Qing and Mao himself were the ultimate influence behind it. The poster insinuated that the university’s leaders were trying to undermine the Communist Party, and were engaged in the dastardly practice of revisionism. 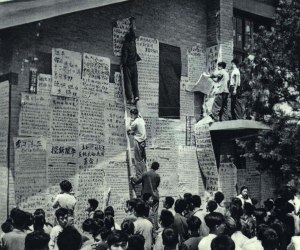 Big-character posters being posted on the campus of Peking University.

It was now Mao’s turn to topple another domino. He used his access to the press to endorse the poster and call it “the first Marxist-Leninist big-character poster in China.” This endorsement was like a bombshell. Mao was revered in China, so anything he said was quickly chewed, swallowed, and digested by the masses. Students in schools and universities throughout China interpreted Mao’s words as a signal to revolt against their schools’ establishments.

Soon, big-character posters sprang up on campuses all over the country, denouncing their school administration as revisionist and counterrevolutionary. These posters were plastered everywhere, on sides of buildings, walls, trees, or any other vertical surface that could be found.

By the middle of June 1966, school classes at all levels of education had emptied out all across the country. Students demonstrated en masse, sporting pictures of Mao, chanting slogans, and threatening retribution against all the imagined enemies of communism that had infiltrated the Party.

The students called themselves Red Guards, and were initially denounced by university officials as counterrevolutionaries. But then they wrote a manifesto, and Mao, with his access to the press, ordered that it be broadcast on national radio, and published in the People’s Daily national newspaper. This gave the Red Guards legitimacy, and that is all they needed to wreak havoc upon the nation.

Come on back in a few days for the next installment, entitled Chapter 21: The Fall of Liu Shaoqi.