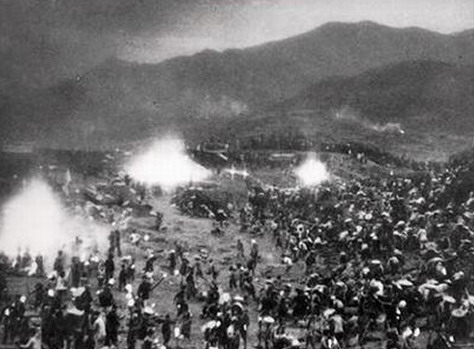 Chapter 14: The Great Leap Off a Cliff

Chapter 14
The Great Leap Off A Cliff

Mao was a man with a plan, and with communism, plans tend to come in five-year increments. Why, I don’t know. Maybe because five is a nice, round number. But in 1953 Mao deployed his First Five-Year Plan. It was a Soviet-style plan, and it was a ripping success.

By 1958, the First Five-Year Plan had substantially boosted iron and steel production, coal mining, cement production, electricity generation, and machine building. Industrial production increased 19% annually, and the national income grew at a rate of 9% a year. Also, more than two-thirds of all businesses were now state-owned, with the remainder partially owned by the state.

However, agricultural output did not increase as much, and this was worrisome for some officials, who feared mass starvation. But Chairman Mao didn’t worry. He became consumed by the hubris of his success.

In 1958, Mao initiated the Second Five-Year Plan. He just knew that since his First Five-Year Plan had been so successful, his next plan would be phenomenal. He even gave it a phenomenal name: The Great Leap Forward.

But this time things turned out differently, and in a way that would profoundly affect China, and Chinese leadership, for decades to come. As it turned out, Mao’s Great Leap Forward was more like a great leap off a cliff.

Mao had grown skeptical of the Soviet Union, when he saw Nikita Khrushchev moderate the policies of Stalin, who had recently died. So he decided that, rather than model his Second Five-Year Plan after the Soviets, which he’d done with his First Five-Year-Plan, he’d come up with his own damned plan.

But his own damned plan became an epic disaster, and caused what was quite possibly the worst humanitarian crisis in human history.

The Great Leap Forward was aimed at increasing both agricultural and industrial production equally, and intended to put China on a road that would match the United Kingdom’s Gross National Product within 15 years. But in order to navigate China to this road, Mao had to set very ambitious goals for communes and factories.

But the Anti-Rightist Campaign had scared the shit out of a lot of people in charge of agricultural production. They feared the disfavor and wrath of the Communist Party. So rather than admit they couldn’t meet the goals, they fudged the numbers. They proclaimed surpluses, and took extra grain away from collectives in order to impress their superiors.

The government then sold that grain to foreign countries, to raise capital for more industrial development.

The extra grain taken from collectives took food from the mouths of peasant farmers. These were the very people working at the agricultural collectives. Starvation ensued, and over the next several years, up to 45 million rural Chinese died.

Most of them died from malnutrition, but not all. Others were worked to death while starving. And many died from beatings at the hands of their overseers, because they were too weak to work as fast as they were required to work in order to meet the unrealistic quotas.

In 1959, in a secret meeting in Shanghai where the food shortage was discussed, Mao is quoted as saying, “When there is not enough to eat, people starve to death. It is better to let half of the people die so that the other half can eat their fill.”

Food was often denied to those who had been labeled as “black elements” in previous campaigns, such as the anti-Rightist campaign. These were religious leaders, rich peasants, former landlords, and so forth. Such people tended to die in the greatest numbers.

The more peasants starved, the more they had to be beaten and tortured to force them to work. Punishments for failure to work hard enough were severe. Some were buried alive, some were bound and thrown into pools, some were stripped naked and forced to work outside in the middle of winter, some were doused with boiling water, and on and on. About half of those who were in charge of collectives regularly beat and caned their workers.

Aside from not working hard enough, other reasons peasants were beaten, or even killed, included: rebellion, reporting real harvest numbers, reporting inflated numbers, sounding alarm, refusing to hand over food, trying to flee a famine area, begging for food, stealing scraps of food, and angering officials.

The harsh treatment of peasants led some to resist. Armed rebellions occurred in at least eight provinces and regions of China. The rebels raided granaries, set buildings on fire, robbed trains, and committed acts of vandalism. However, these rebellions never posed a serious threat to the government, and never lasted much longer than a year.

One of Mao’s goals in the Great Leap Forward was to increase the production of high quality steel. Mao didn’t know shit about steel manufacturing, but he fancied himself an expert. In his self-assured “wisdom,” he encouraged rural and urban citizens to set up backyard furnaces, and to melt down scrap metal to produce steel. 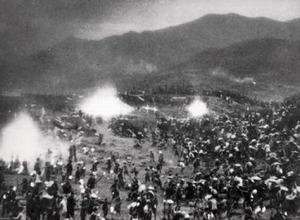 Everyone was eager to get the good prices the government offered, so they began melting down anything made of iron. Pots, pans, farming equipment, and anything else made of iron was fair game. And wood was stripped from houses, to burn in the furnaces. Trees were denuded. Farmers stopped farming so that they could produce steel instead, and this exacerbated the famine.

But in the end, the best metal the backyard furnaces could produce was a low-grade pig iron of little economic value. Intellectuals could have warned Mao this would happen, but after the Anti-Rightist Campaign, the emperor with no clothes was dressed to the nines as far as they were concerned. Nobody dared correct and enlighten him.

Come on back in a few days for the next installment, entitled Chapter 15: Peng Dismissed From Office.