A Trip to China

It’s pretty hard for Americans to travel to China these days. We’ve banned the Chinese from coming here, and they’ve banned us from going there. Ostensibly, it’s because of the Covid pandemic, but that makes no sense to me. After all, both our countries have had Covid. They’ve got plenty of antibodies over there, and we’re getting plenty of our own over here.

In fact, none of the travel bans make sense to me. We can’t even travel to Canada, nor can our Canadian friends visit us. And yet both countries have had Covid. What are we trying to prevent that hasn’t already happened? In my view it’s all bullshit hysteria, rooted in politics and xenophobia.

We can’t travel to Europe either, nor many other places. Some people from some states can’t even travel to other states without having to quarantine. Try visiting Hawaii, and you’ll have to lock yourself up in a hotel for 14 days, before you can dip your tootsies in Waikiki beach. This is nutty, in my view.

So I called bullshit on this, and went ahead and planned a trip to China, and I’m inviting all of my blogging buddies to come with me. But it has to be a virtual trip, because that’s the only way we can get to that country these days.

I’ve already dug a hole for myself now, with my complaint about travel bans, and I’m bracing myself for the usual heated lectures from those who disagree with me. But since I’ve started this hole, I’m just gonna keep digging deeper and deeper until I reach my travel destination. Those who want to visit China will have to grab a shovel and follow me.

Not the Covid bullshit but rather, the bullshit aftermath to the outrageous killing of George Floyd. We’ve seen our streets fill with demonstrators demanding racial justice. That’s not bullshit, in my view, although I do wonder about the public health experts who encourage demonstrating, arguing that racism is more dangerous than Covid. But the bullshit I’m referring to is when the demonstrations devolve into riots, looting, vandalism, burning down businesses, and pulling down statues.

I’ll keep digging by pointing out the increase in “cancel culture.” That’s more bullshit, in my opinion. We’ve seen people’s careers destroyed for something unfortunate they may have said or done, even if happened many years ago. We’ve seen iconic names targeted for change. And we’ve seen the destruction of statues of famous Americans.

Conservative pundit Jesse Kelly recently magnified the absurdity of the cancel culture craze, when he launched a campaign to cancel Yale University. He points out that the founder of Yale U., Elihu Yale, was a slave trader. With tongue in cheek, he’s calling on Yale to immediately change its name, and remove the name of Yale from every building and piece of paper, or else they hate black people.

The persecutorial nature of cancel culture does remind me of the iconoclasm of China’s Cultural Revolution. Icons of our culture are in danger of being destroyed, often for unexpected reasons.

For example, the name Eskimo Pie, for that delicious frozen ice cream treat, is being canceled. The word “Eskimo” is considered offensive, because it either means “eater of raw meat” or “to net snowshoes” (experts can’t agree which).

In another case, a federal judge recently resigned after the way he complimented a court clerk. He said she had “street smarts.” That’s now racist, in case anyone doesn’t know. The judge didn’t know, and although he publicly apologized, that apparently wasn’t enough. He had to be canceled. So he resigned.

There have been calls for Canadian Prime Minister Justin Trudeau to resign, for having appeared in blackface. And last year, Virginia Governor Ralph Northam found himself in the same boat. He nearly resigned for having appeared in blackface many years earlier, until it was discovered that his would-be successor, Lt. Governor Justin Fairfax, had been accused of sexual assault.

Northam and Fairfax might have both resigned, except that the next successor in line, Attorney General Mark Herring, had once appeared in blackface. If all three resigned, then the Republican Speaker of the House would have become governor. The Democrats weren’t about to let that happen, so they canceled cancel culture, for that particular situation, and everybody kept their jobs.

A statue of Ulysses S. Grant was canceled by a lawless mob of protesters in San Francisco, because his wife had owned slaves, or because he once owned a slave which he inherited and then set free, or something like that. Ulysses S. Grant. You know, the guy who defeated General Lee, winning the Civil War and thus playing a vital role at ending slavery. That guy.

Statues of George Washington and Thomas Jefferson, who for sure owned slaves, but arguably had some desirable facets to their characters and accomplishments, are also in the crosshairs of the culture cancelers. And there’s the Emancipation Memorial in Washington D.C., depicting Abraham Lincoln freeing a kneeling slave. It’s being guarded, for fear protesters will tear it down illegally. A replica of the statue, in Boston, will be canceled, but at least that’s being done legally.

I can understand canceling things like Confederate statues, and the Mississippi state flag, when done legally. But I feel uneasy when cancel culture goes beyond the obvious and into gray areas. And regardless of the symbol, I don’t like things torn down, ripped up, or otherwise demolished, if it’s done illegally. That only encourages more of such actions, in an ever-broadening mob crusade against anything even remotely hinting of racism.

The mob even took over part of Seattle. They “chopped” it away and turned into an autonomous zone, where no police were allowed. In this police-free “paradise” two teenagers were shot to death, until the cops finally moved back in and took over, after a 23-day absence.

The madness is getting dangerous. A leader of the Black Lives Matter movement, Hawk Newsome, has threatened to “burn the system down” if BLM doesn’t get its way. And the BLM movement has called for the defunding (canceling) of police departments. Do they have any inkling of the grief, pain, and suffering that may follow? If they knew anything about the Chinese Cultural Revolution, they would, because that’s what happened there. The system was burned down while police were required to stand down. 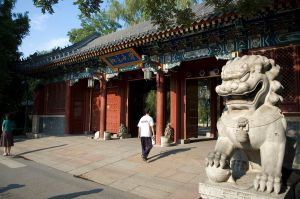 The West Gate to Peking University. This university in Beijing was at the epicenter of the Cultural Revolution. Photo by Daniel Ng, CC BY 2.0.

It seems strange that our orderly society would so quickly devolve into anarchy. But so far, it’s not too late for us. So far we haven’t devolved to the level of rampageous anarchy that ravaged China during the 1960s. It was much worse for them than it currently is for us. Millions died in all their mayhem. And millions more were persecuted and suffered irreparable harm.

No, it’s not too late to learn from China’s Cultural Revolution. At this point, we can use it as an example of what not to do, in our efforts to change our culture. It can be a yardstick to measure the danger of “burning the system down” and prod us to seek more safe and constructive ways to transform.

The book review will come first, then the historical series. They will allow us to take a virtual trip to China, while also stepping back in time. In fact, we’ll go all the way back to 1893, when Mao Zedong was born. We’ll learn about his life, the Chinese civil war, and how communism was established in mainland China. And we’ll explore the horrors of the Cultural Revolution, and how it came about, and how it ended up.

We won’t let Covid stop us. We’re traveling to the exotic lands of East Asia, and getting in touch with a part of the world that often seems mysterious to Westerners. There’s a lot to learn, but I’ve tried to make the reading as enjoyable as possible.

It all starts in a few days, so pack your virtual bags for the Orient. Whoops, “Orient” is no longer politically correct, according to some scholars. I mean “Asia”. Damn, now I hope this blog doesn’t get canceled. If it survives, I hope to see everyone soon.