The First Trimester, Part 4: The News

The First Trimester,
Part 4:
The News 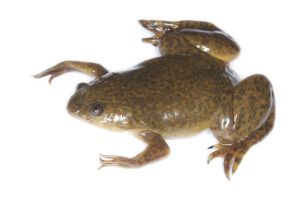 It was bizarre. She peed in a cup. Her doctor then injected her urine into a frog. The frog subsequently laid some eggs. And that’s how my mother’s doctor figured out she was pregnant. Because that’s how pregnancy tests were done back in the 1950s.

I could see all of that crazy stuff going on, from my perch on Saturn’s rings. But I zipped back down for her follow-up visit. I was getting into this drama and wanted a closer view. My mother had set this whole soap opera up, sabotaging the condom to get pregnant on purpose. And now she got her wish.

Her fake look of surprise was laughable. And her protestation was one for the Dissimulation Hall of Fame. “But doctor, my husband used a rubber! How could I possibly have become pregnant?”

Her doctor explained that condoms aren’t 100% effective, and that this wouldn’t be the first time this form of birth control failed. “It happens all the time.” he claimed. Ah, so now she had some ammunition when facing her perplexed and possibly suspicious husband.

The doctor asked her when her last period had occurred. It was June 21st. And so he set that as the start date of her pregnancy, and calculated the expected birth at 40 weeks later, or March 28th.

March 28th. The day I would embark upon my journey through human life. A day to dread. A day I hoped would never come.

Mom had to do some quick thinking. She hadn’t really expected her plan to work, but against all odds it bore fruit. I was the fruit. Forbidden fruit. And now she had to figure out some way to present this fruit to Dad, and get him to accept it.

After about an hour of cogitation, she realized it was obvious. She’d just blame this forbidden fruit on the serpent. The one-eyed serpent that was SO BIG it must have busted the condom open. Yeah, that’s it, she grinned. Stroke his ego while making him feel responsible.

His 27th birthday was coming up in just a few days. So she decided to keep me a secret and break the news to him on that day, when he’d be in the best mood to receive it.

She promised him a taco dinner (his favorite). She promised him beer. And she promised him a “very special surprise” after the kids would be in bed. And he was looking forward to all this great stuff. He was even warming back up to her and rethinking his plan to leave her. And when his mistress called him at work to wish him a happy birthday, he didn’t encourage much conversation. He cut the call a little short. And after he clocked out, he rushed home to his promising wife.

The tacos were so flavorful, he practically inhaled them. The beer flowed down his throat like a springtime freshet. And then he hastily excused himself to take a shower.

The birthday boy in his birthday suit grinned like a wolf at my mother when she entered the bedroom. She nervously smiled. Seemed a little bashful. Which was kind of strange. And she kept her bathrobe on.

She sat at the foot of the bed and anxiously surveyed his body. She took a deep breath. “Orin,” she brightened up, “I have some very special news for you.”

Orin, my dad, creased his brow. He’d hoped the special surprise would be oral sex. Now he suspected it was more like oral words. “Okaaay,” says he, wary about any kind of surprise news.

“Orin,” my mom widened her eyes and grinned as widely as possible, “you’re going to be a daddy again!”

My dad was guzzling some beer when he heard this, and choked. A paroxysm of coughing ensued. His full staff went to half staff, then toppled over completely and shriveled up. He dropped the can of beer, then reached blindly for it. Finally found it on the soaked bed covers with about four fluid ounces remaining. A few swallows later, tears streaming down his face, he finally regained control of his epiglottis and recovered from his apnea.

He impaled her with murderous eyes. “WHAT did you say?”

“I’m pregnant,” Mom blurted out. “and you’re going to be a daddy again, next spring. Happy birthday!”

He lay there silent for a full minute, and just glared at her. Finally, “How could this be? I’ve been using rubbers!” he pleaded with her, as if she were some sort of arbiter of this fate.

My mom went to her well-rehearsed lines. “I asked the doctor the same thing. Know what he said? He said this sort of thing can happen with big men. Sometimes a man is so big the rubber breaks.” She reached over and stroked his now-tiny todger. “And you ARE very big. I’ve always had a hard time making room for this thing.”

The birthday boy lowered his eyes and silently mused over the news. He cursed his huge tallywhacker. All that thing had ever done was get him into trouble. And now, yet another kid. And from a woman he wasn’t sure he loved anymore.

Come on back in a few days, or so, for the next installment of The Birth of Tippy Gnu, entitled, The First Trimester, Part 5: Down to Earth.