This is the last installment of my Improving Our Bird Brains series. By now we must be birdbrain geniuses. We’ve become so smart that I think there’s little room for further improvement, and therefore no more need for these featherbrained posts.

Before I get into the Brown pelican bird, I want to warn readers that there’s a tobacco substitute, as well as several sex acts, also called the Brown pelican. It’s all disgusting and vile, and anyone who’s asked if they’d like a Brown pelican is well advised to run like hell.

As for the bird, there are eight species of pelicans worldwide, divided into two groups: the browns and the whites, with four species of browns (actually, some are grayish pink), and four species of whites (actually, one is black and white, and one is grayish white). It appears that whoever did the dividing was also a little birdbrained.

This is the kind of Brown pelican I’m referring to.

The skies and waters of the United States host only two of these species of pelican, imaginatively called the Brown pelican and the American white pelican. These birds have a lot of similarities, but there are also some differences.

For instance all pelicans feed by swimming around in the water until they spot a fish, then plunging their beaks in and grabbing it. However, Brown pelicans also often fish by flying more than 30 to 60 feet above the water, and diving in head first. Diving from such heights is a derring-do that no other pelican possesses.

In shallow waters, pelicans will use teamwork to catch fish. Several form a line, and drive small schools into the shallow waters by beating their wings against the water. Then they dive in and scoop up their prey. Those who don’t get any fish, punch out on a time clock and have to wait until every other Friday for their share of the catch. 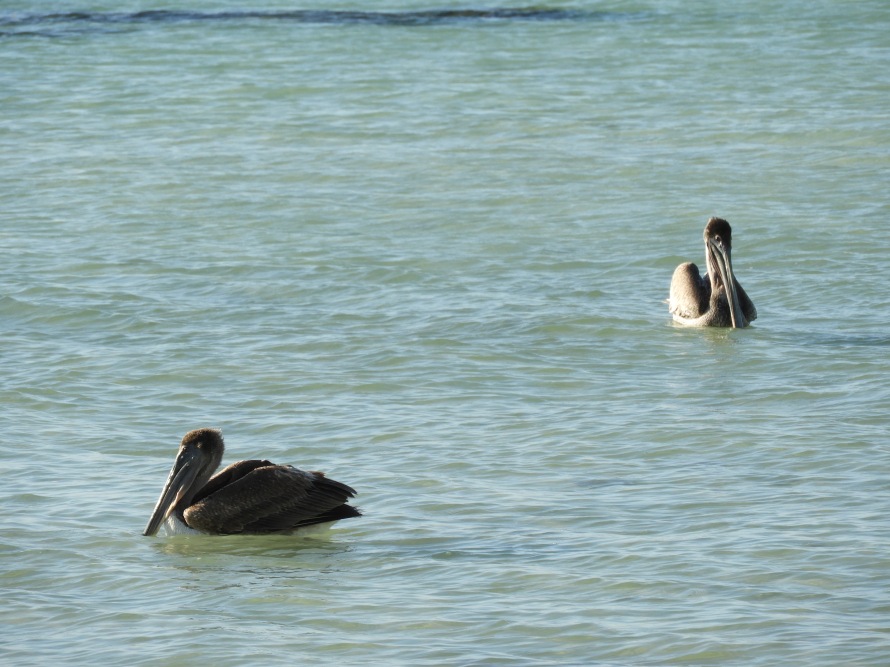 A couple of Brown pelicans fishing together, at Bahia Honda State Park, Florida.

Pelicans often catch multiple fish before eating, and store them in their big throat pouch. In order to eat the fish, a pelican has to tilt its beak forward to drain the water from the pouch. This can take up to a full minute, and gives other sea birds a chance to zip in and steal the food right out of the pelican’s mouth. This must be draining for pelicans, in more ways than one.

Brown pelicans are masterful fliers. They often fly in group formation, skimming the ocean just inches above the waves. They have long, broad wings, with an unusually large number of 30 to 35 secondary flight feathers. They use these great wings to create an air cushion between themselves and the ocean, and this enables them to glide very close to the water without touching the surface. It’s an effortless way to fly, and they often employ it to travel long distances.

But when pelicans need to fly further, they go high instead of low. They catch a thermal and soar to heights up to 10,000 feet. Then they glide for distances over 90 miles, to feeding areas.

Pelicans nest in colonies, and are monogamous. But they only stay married for one season. After that, it’s Splitsville, and off to a new mate with each new season. And as usual, the lawyers get everything. 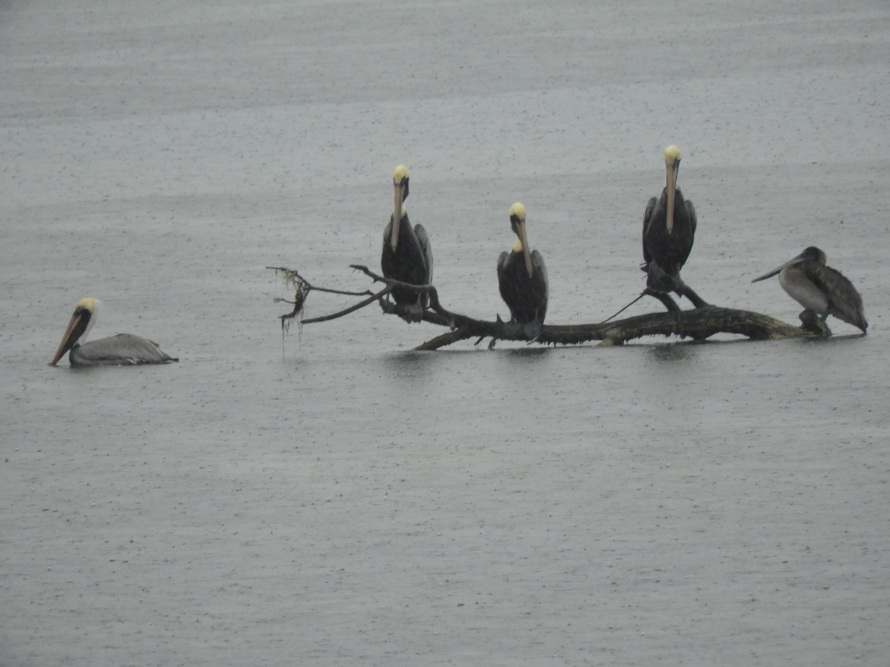 These Brown pelicans off of Florida’s Little Torch Key have long faces, because it’s raining.

People are stupid when it comes to pelicans. For centuries human beans have tried to kill these great birds off, because they’re seen as competition for fish. However most of the fish that pelicans eat are not the type that people eat. They’re not much competition at all.

But this hasn’t stopped large culling campaigns, dating back to the 19th century in America. And it’s still happening. In 2016, the Idaho Fish and Game department launched an attack on pelicans with the goal of cutting their population in half. And this even though they are classified as a “species of greatest conservation need.” Fuckin’ potato heads.

Pelicans eat lots of fish, but not usually the kind humans eat.

Human ignorance has also led to pelicans being revered. In medieval times they were thought to be self-sacrificial parents that would wound their own breasts and feed their own blood to their young, when no other food was available. This is a myth, brought on by the observation that pelicans sometimes press their bills very hard into their chests. But they’re not stabbing themselves with their bills. Actually, they’re trying to completely empty their pouches and finish swallowing all their caught fish.

Religious statue of a pelican wounding its breast to feed its young. Photo by Andreas Praefcke. CC BY 3.0.

Nonetheless this myth of self-sacrifice has allowed the pelican admission into Christian iconology, as they remind the pious of Christ’s self-sacrifice. It’s not uncommon to see drawings of these birds on the cover pages of bibles, or to see pelican statues at churches or other Christian institutions. Which I think is appropriate, since I find religion hard to swallow, just like the pelican trying to empty its pouch.

I have no more to say about the pelican, so I’ll leave off with these words, often misattributed to Ogden Nash, but actually written in 1910 by American poet Dixon Lanier Merritt:

A wonderful bird is the pelican.
His bill will hold more than his belican.
He can take in his beak,
Food enough for a week,
But I’m damned if I see how the helican.