How To End This Awful Crisis

We’ve had a worldwide toilet paper shortage since March, and I think I’ve figured out who’s to blame. Women. Especially my sister.

My sister paid us an illegal visit a few days ago, and as a token of our love for her, we gifted her with a highly coveted six-pack of Charmin Ultra Strong toilet tissue. Her eyes lit up like open sphincters the instant she laid eyes on it. She thanked us profusely, confessing that she only had two rolls left at home, and that this was enough to last her six whole weeks. 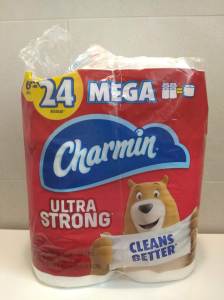 It will take me 5 more months to finish off this 6-pack.

What the fuck? Six weeks?!

That means she goes through an entire roll a week. And these are the “Mega” rolls, where Charmin’s packaging claims that one Mega roll is the equivalent to four regular rolls. Doing the math, my sister goes through 24 regular rolls of toilet paper in six weeks. That’s four rolls a week, or a little over one roll every two days!

And she lives alone, now that she’s a widow, so there’s only one ass and one pudendum being wiped in her house on a regular basis. This really seems excessive to me. My wife and I use separate bathrooms, so I know how much toilet paper I go through, and my experience demonstrates that one Mega roll will carry me through at least an entire month.

Not wanting to embarrass my sister, I didn’t interrogate her over her profligate use of this precious paper, but after she left I brought the matter up with my wife. She sat me down and explained the difference between men and women when it comes to wiping.

Men and women probably use the same amount of toilet paper for cleaning up a shit, according to the light of my life. But pissing is a whole different ball game. After a man pisses, she explained, he just wags his wanger around to get rid of the drips, then stuffs it back into his pants. No toilet paper necessary. But when a woman pisses, she’s left with a swampy mess in her nether regions. It’s going to require half a forest to clean up her delicate parts.

My wife demonstrated by pulling from a roll, what she described as a reasonable amount of tissue to swab herself below decks. I couldn’t believe it! She wound layer after layer after layer around her hand, until I had a hard time distinguishing which was the original roll of toilet paper, the paper on the spool or the many squares covering her hand like an oven mitt.

But then she showed me a trick she recently learned, in response to the worldwide toilet paper crisis. She keeps a spray bottle full of water by her toilet. Nowadays, after she takes a leak, she rinses her downunder with spritzes of water. This enables her to dry herself out with just one or two squares of treasured tissue, without any danger of coming into contact with urine. This technique enables a roll to last much longer for Mrs. Gnu, than ever before.

This toilet paper shortage is threatening the very fabric of society. Fistfights are breaking out in the toilet tissue aisles of supermarkets. A black market for overpriced t.p. is thriving, and gangbangers are shooting each other for the rights to sell it at street corners. Something must be done, and I think women hold the key.

I believe women can end the toilet paper shortage by simply changing their cleansing habits. All they have to do is follow the good example of Mrs. Gnu. How much does a little spray bottle cost? A tiny fraction of a truckload of toilet paper, I’ll tell you that.

Women could save their households a ton of money with a spritzer, and end one of the most devastating crises to ravage the world in centuries. Not only that, but they’d save rainforests, the taiga, and deciduous woodlands the world over. They could even end global warming.

Women would have a learning curve, though, that could take some time to get over. That’s because they’d have to develop their underhanded aim. But with some practice and skill, I think any woman could make a six-pack of Charmin Ultra Strong last an entire six months.