My last installment was about egrets, which I have no regrets about. Except that egrets are herons. However, herons are not necessarily egrets. And some herons are also known as bitterns.

That’s because herons are weird. They come in a wide variety of peculiar, funny-looking species. But they do have some things in common.

Most herons have long, sharp bills, the better for harpooning fish and other creatures. They also have long, extensile necks. In fact, I think the necks are the weirdest part of herons. They can kink it down to an S-shape, and cover it with their feathers, so it looks like they have no neck at all.

Herons also have long legs, which they use for wading in shallow waters, while hunting for food. They mainly eat aquatic creatures, such as fish, frogs, salamanders, molluscs, crabs, and aquatic insects. But they are also fond of lizards, which they have to venture out on land, to catch.

Herons love to still-hunt. They will stand motionless in or near water and wait for any prey to wander close by. Or, they may pace very slowly and stealthily, and sneak up on their victims. And some will drop bait in the water, to lure their prey within striking range of their long necks.

Most herons live in colonies, and all herons are monogamous. However some females have been known to pair with impotent mates. They compensate for this by catching a little on the side, with virile males who don’t mind straying from their own mates now and then, heron there. So I suspect there can be some bitter, depressing soap opera dramas within heron colonies.

I saw lots of herons in Florida, though at the time I didn’t know that’s what they were called. Or maybe somebody told me, but hell, I’m hard of heron. I got lots of pictures of them. They’re very photogenic, primarily because they tend to stand still for long periods of time. They’re a photographer’s dream.

So please enjoy the following clear, sharp photos of strange but beautiful herons: 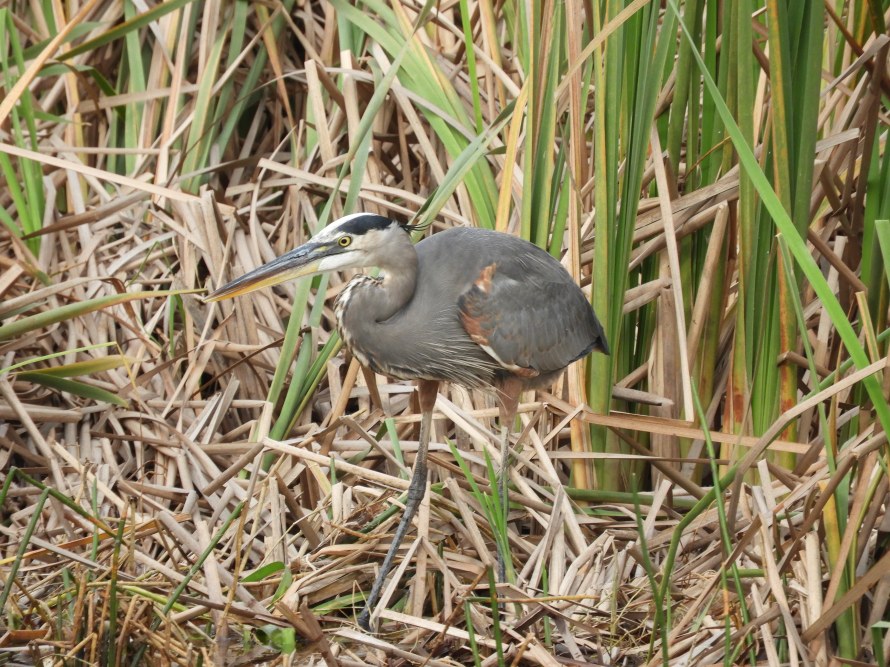 A Great Blue Heron in the Francis S. Taylor Wildlife Management Area of the Florida Everglades. This guy maintained this pose for about ten minutes until I finally decided to take its picture. I felt sorry for it. After all, anyone who wants their photo taken this badly should really be obliged. 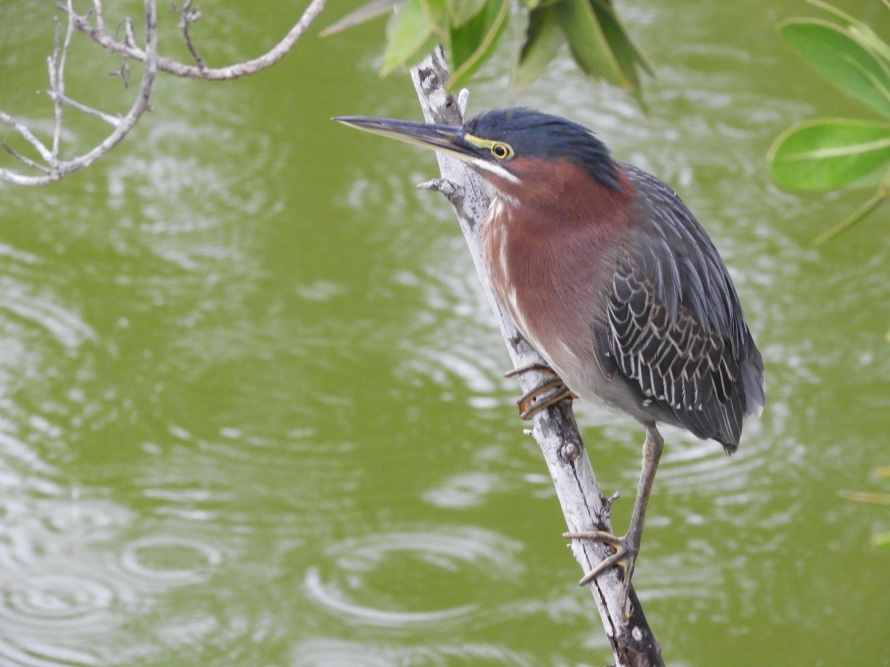 This Green Heron posed for me at the Blue Hole, on Big Pine Key. This is a relatively small species of heron, attaining an adult body length of only about 17 inches. Green herons are loners. They don’t like other birds. And like loners, they tend to be psychopathic. When they catch frogs, they drown them before eating them. Sick bastards. They’re also smart, and are one of the few birds known to use tools. The tools they use are small bites of food, which they drop in the water to bait their prey. 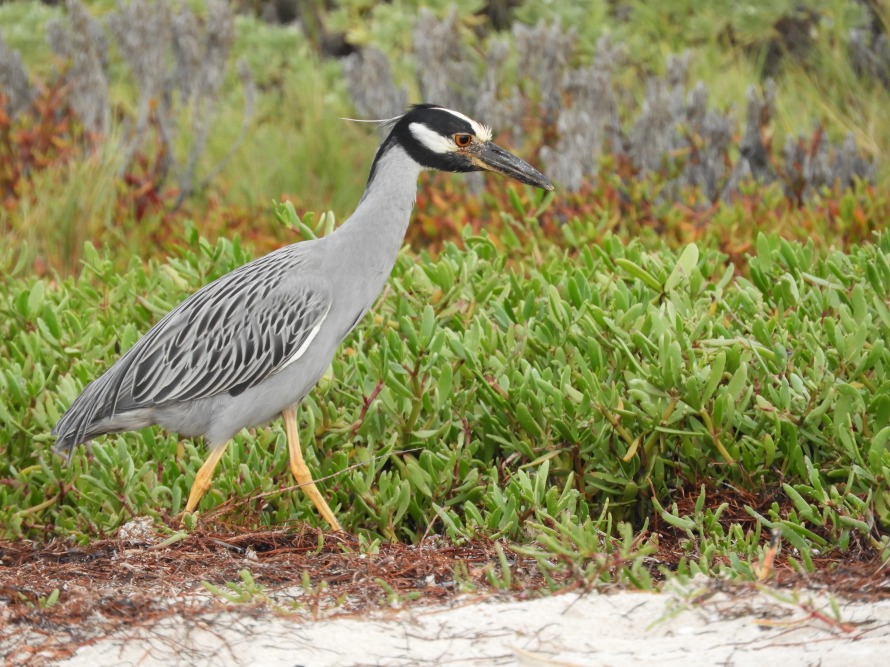 This is the Yellow Crowned Night Heron, which I observed at Bahia Honda State Park, in the Florida Keys. Strangely, although it’s a “Night” heron, I caught it out in broad daylight, committing its crimes. And as you can see, I caught it in mid-stride. But there’s no blur in the photo, because this bird moved in super-slow motion, as it slowly inched along the beach, stealthily stalking its prey. This type of heron specializes in eating crustaceans, particularly crabs. 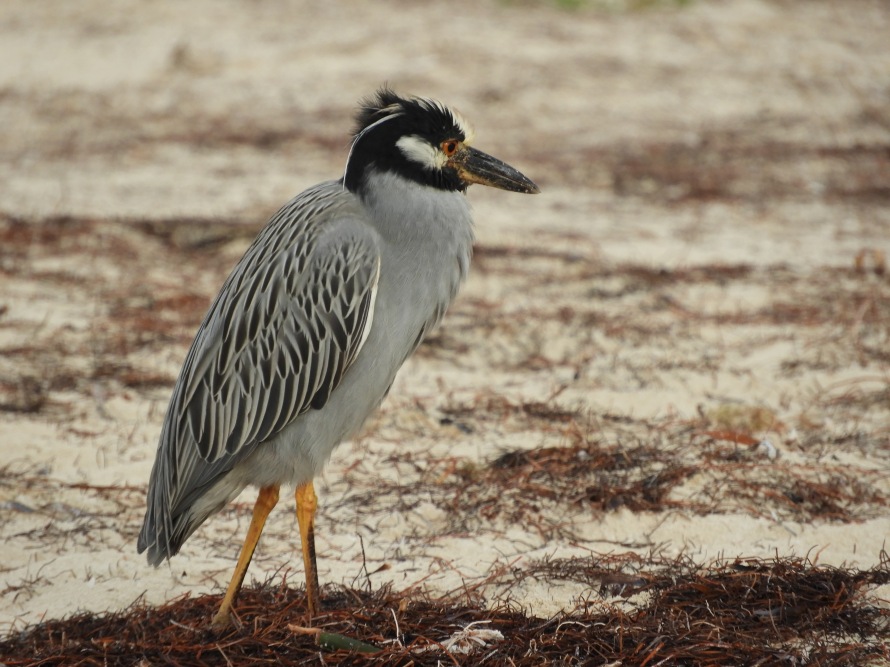 Another Yellow-Crowned Night Heron at Bahia Honda State Park. This guy has its neck retracted. Notice how much shorter its neck seems to be, compared with its counterpart in the prior photo? I wonder if herons are related to turtles.