When my wife and I were sojourning in Florida a few months ago, we saw many strange birds we’d never encountered before in the wilds. I took photos just to have evidence I’d seen such weird looking critters. Then I looked them up on the internet, to identify them.

I don’t fancy myself much of a bird watcher, but I learned some fascinating things about these winged weirdos. Yep, I really improved my bird brain. And I figgered my followers might want to have their bird brains fixed up too. So this here’s a series I’m launching, called Improving Our Bird Brains. We’ll be reading it fer a spell or two, ‘til we’re all a might bit smarter.

This is Part 1. It’s about the Anhinga bird.

We first spotted the Anhinga at the Blue Hole on Big Pine Key. It was sitting in a tree with its head tucked into its wing, trying to sleep. Or maybe it was just shy. But once in awhile it would peak out and I’d try to grab a picture. I had to be quick, and on one of my snapshots I managed to capture its pointy face. 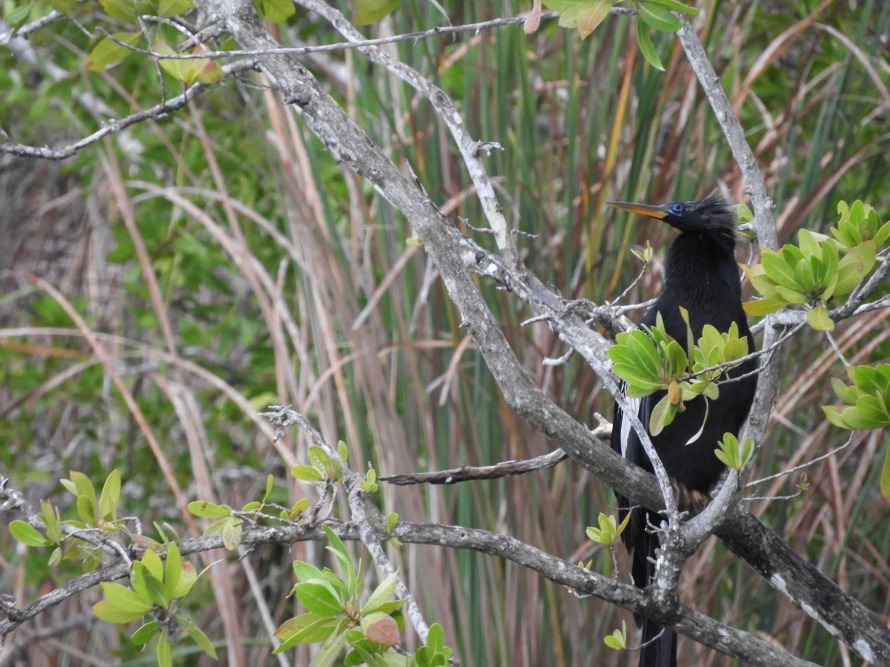 The male Anhinga is nearly solid black, with silver highlights in its wings. This is how this male, at the Blue Hole on Big Pine Key, appeared for a brief second, before poking its face back under its wing.

You’ll notice it has a long, sharp beak. It uses that beak to impale fish.

These birds are about 37 inches long, and have a wingspan three-and-a-half feet wide. They have webbed feet like a duck, but unlike most ducks, they can perch in a tree.

The Anhinga is also called the Loch Ness Monster bird. That’s because of the way it appears when swimming. It’s a water bird, but unlike ducks and many other waterfowl, the Anhinga has no oil on its feathers. So when it swims in a pond or lake, it is not buoyant. Rather, its body sinks way down low, and all you see is a long neck sticking out, kind of like the way Nessie, the Loch Ness Monster appears.

This low profile allows the Anhinga to sneak more stealthily upon its prey, sort of like a submarine with just its periscope sticking up. When it spots a fish, its long neck strikes with the speed of an archer, as its arrow-like beak skewers the fish. Then it tosses the unfortunate piscine up in the air and catches it in its mouth.

There’s a drawback to being without a pinguid integument. The lack of oil means the feathers of the Anhinga absorb water and become soaked. And so this bird is forced to spend much of its time sitting in trees with its wings extended, in an effort to dry them out. 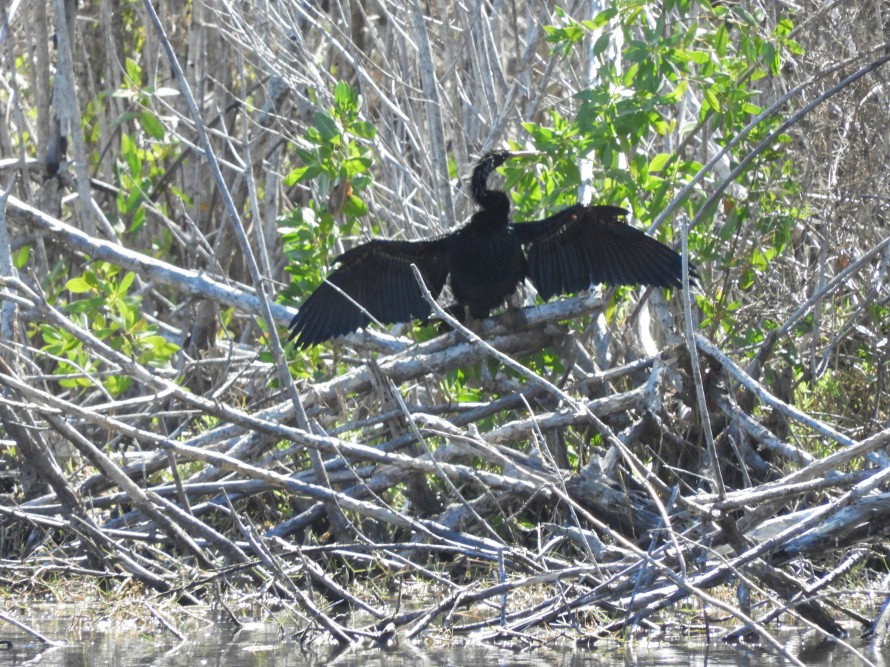 The sight is haunting. If you’re ever hiking alone through a swamp and spot this black bird drying its feathers, with its outstretched, 42-inch wingspan, it’s likely to raise the hair on the back of your neck. And you might just turn around and run like hell, in horripilation. Until a hand reaches out from underground, grabs your ankle, and pulls you into quicksand.

In fact, the word Anhinga is from the Brazilian Tupi language, meaning devil bird. In America they’re also called water turkeys, because they resemble male turkeys while drying their feathers.

The Anhinga is found all over the world, in warm, shallow waters. It’s been known to migrate as far north as Pennsylvania during the summer, but sticks to America’s southern coast in the winter. 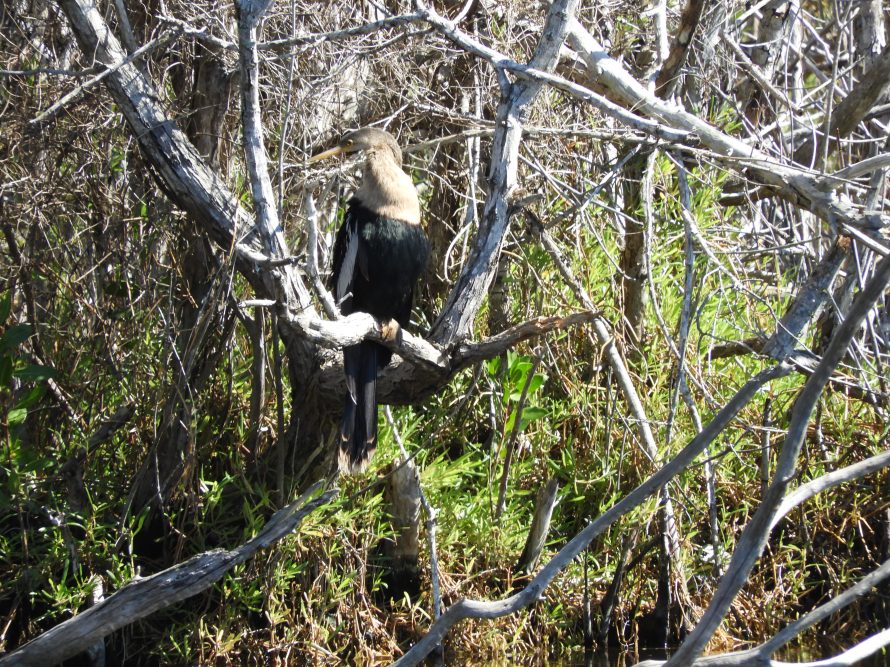 The female Anhinga has a light tan neck, such as this beauty at Mrazek Pond, Everglades National Park.