Geologists claim there’s nothing like it anywhere else on Earth. It’s only 5,000 years old, and a baby by geological measures. But its Brobdingnagian size belies its infancy. Technically it’s a river, but not just any kind of river. Geologists describe it as a sheetflow river. And its sheetflow nature has morphed it into a freakishly overgrown swamp creature.

It’s 60 miles wide and a hundred miles long. It flows at the average rate of a half mile a day, though some parts require years to traverse from source to ocean. It’s so large it creates its own ecosystems. These are mostly sawgrass marsh, but there also islands of tropical hardwood hammock, and areas of pineland, cypress, mangrove, and coastal prairie. These ecosystems gradually form, then disappear, then reemerge in different areas, under the control and caprice of the swamp creature.

Nobody knows just what this swamp creature is, but in 1773 a British cartographer named John Gerard de Brahm, gave it the name River Glades. But under the southern drawl way of pronouncing things, this name gradually evolved into Everglades, by 1823.

The broad floodplain of the Kissimmee River empties into a vast, nine-foot-deep puddle of water called Lake Okeechobee. At 730 square miles, it dominates south Florida, and is second only to Lake Michigan as the largest natural freshwater lake contained entirely within the contiguous 48 states.

During south Florida’s wet season, from May to October, the waters of Lake Okeechobee spill over like coffee from a distracted barista. The overflow creeps southward, replenishing the River Glades, and maintaning the life of the swamp creature. Its porous limestone bed absorbs this moisture like a Brawny paper towel, storing it and sustaining the river throughout the dry season.

A slight rise in the land, called the Atlantic Coastal Ridge, protects the Miami area from the flooding fingers of the swamp creature. It forces the River Glades to ooze south and west on its sluggish creep to the ocean.

It terminates reluctantly in the Atlantic waters of Florida Bay, at the murky south and southeastern edges of the Florida peninsula. The brackish water surrounds hundreds of islands, and is drank by thick forests of red, black, and white mangroves. Here, vast beds of turtle grass and algae, feed sea turtles and manatees. 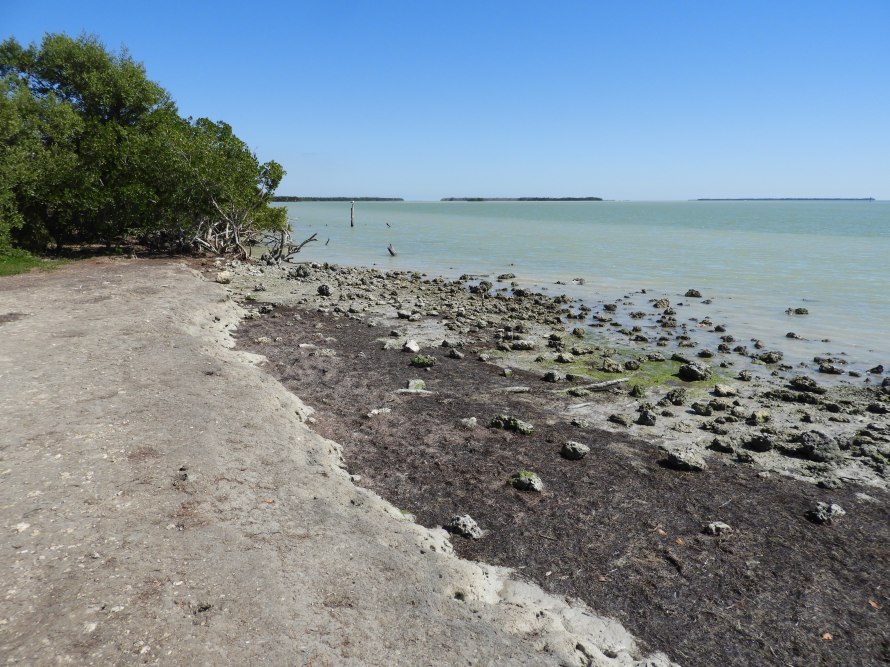 This swampy region is so enormous, it generates its own thunderstorms. Hot, moist summer air convects from its middle and moistens its edges with downpours. And so it can be said that the swamp creature has a life of its own.

Believe it or not, before the swamp creature was born, this area was much like a desert. Native Americans settled this arid land, and hunted giant sloths, saber-toothed tigers, and spectacled bears. But climate change and overhunting drove these animals to extinction.

Egrets foraging in one of the drier areas of Everglades National Park. Egrets seem to be very common in Florida. About as common as regrets in Nevada.

Around 3,000 BC, shifting weather patterns gave birth to the swamp creature. The natives had to adapt. They formed the Calusa people to the north and west, and the Tequesta people to the south and east. The swamp creature was not friendly to humans, so they lived mainly in coastal villages. Then about 400 years ago an alien invaded, called the Spaniard, and these aliens decimated the two tribes, as well as other tribes in Florida. 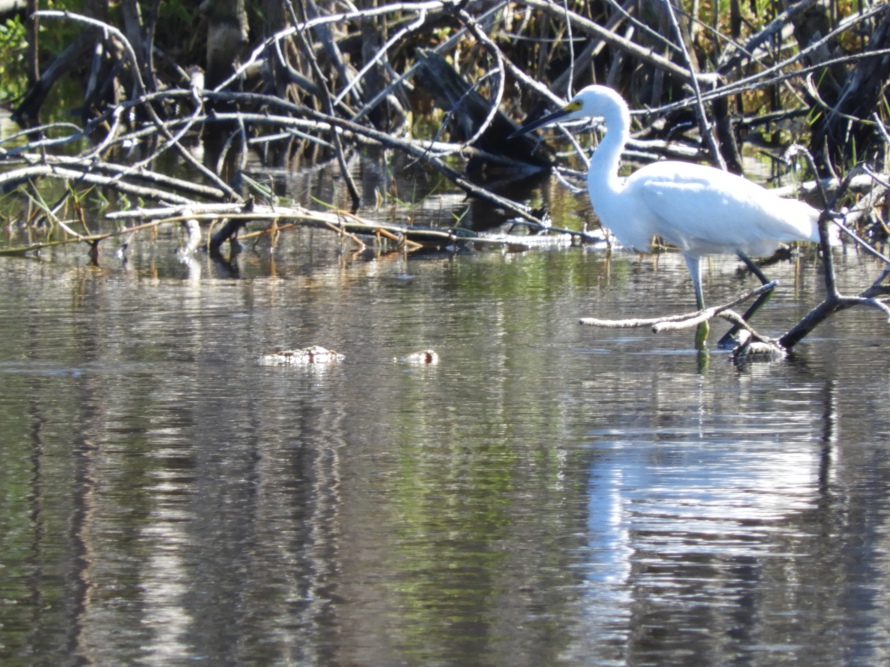 Yet another damned egret. But wait? Is that a crocodile in the water, waiting for its meal to come closer? We couldn’t tell, and it appears the egret is also a little uncertain.

After this, the Creek people from the north invaded Florida and assimilated with what remained of the original tribes. They soon became a new tribe, known as the Seminole. Around the same time, escaped slaves and free blacks settled nearby, and intermingled with the Seminole. They became known as Black Seminoles, and to this day claim Native American heritage. 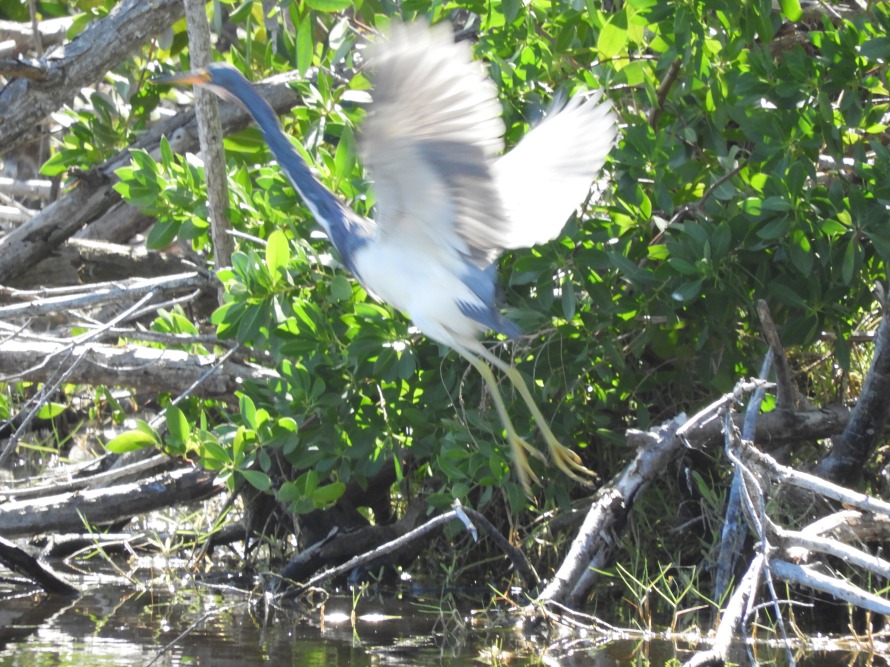 I call this the Purple-People-Eater Bird. But in this case, I think it’s trying to avoid being eaten.

The United States waged three wars against the Seminoles, both red and black. The first two resulted in thousands being removed from Florida and relocated in what is now Oklahoma. But about three to five hundred natives escaped south to the spongy grounds of the Everglades. There they were absorbed by the swamp creature, where they had to learn to adapt to the wet way of life.

The United States fought them again, in the Third Seminole War, which lasted from 1855 to 1859. But the swamp creature protected them, and U.S. forces, weary of slogging through the vast, inhospitable muskeg, finally gave up and left them alone.

These pelicans, in Mrazek Pond, were bullying the egrets, while trying to corner the market on the pond’s fish.

Incredibly, they remained in the Everglades, untouched and wild for the next hundred years. But finally they made peace with the federal government, in 1957. Today the Seminoles occupy a reservation in south Florida, where they mire their invaders in the swampy slough of casino gambling.

The Everglades plays host to a variety of long-necked, long-billed birds. These two are foraging near Flamingo Beach, at Florida Bay.

In the 1900s a determined effort was made by humans to drain the great swamp and develop it into farmland and housing. To some extent this succeeded, and the Everglades began to dry up. But fortunately, some people loved the swamp creature and fought to protect it. The writer Marjory Stoneman Douglas was especially effective, and her efforts at public persuasion helped lead to the dedication of Everglades National Park in 1947.

Nine-Mile Pond, in Everglades National Park, is a beautiful start to a canoe trail. But before plopping your canoe into the water, be sure to scan around for lurking danger.

Yes, the newborn and revivified swamp creature continues to soak the earth in south Florida. Ecotourism, designed to protect the environment while allowing humans to enjoy it, has become a big industry. People can visit this lush, unique, sprawling creature by car, airboat, canoe, and on foot. But I recommend you pack a can of DEET.

And while watching out for alligators, water moccasins, and invasive pythons, tread carefully and treat this land gently. After all, it’s just a baby.