The Florida Keys is an archipelago that descends like stepping stones toward Cuba. I’ve always felt curious about these islands and the viaducts that connect them. So one of my dreams was fulfilled recently when I drove the Overseas Highway (U.S. Highway 1), from Key Largo to Key West. 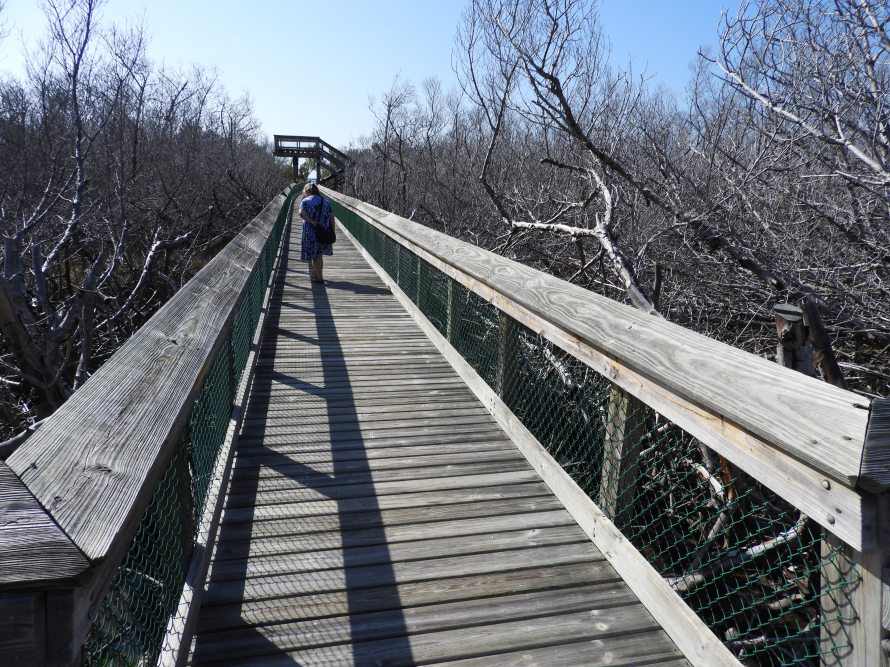 On our way down the Keys we stopped at Long Key State Park, at Mile Marker 67.5, and hiked the Golden Orb trail. This trail was named after the Golden Orb spider, which at one time covered this island with millions of webs. But on September 10, 2017, Hurricane Irma flooded Long Key with an eight-foot storm surge that wiped out almost all of the arthropods. They’re slowly creeping back, but are still fairly rare.

For centuries after de Leon, you had to have a boat or good swimming arms to reach the Keys. But then the United States took Panama from Columbia, and in 1905 began constructing the Panama Canal. This gave an entrepreneur named Henry Flagler an idea. Flagler was filthy rich, having been the founder of Standard Oil. Key West has a deep-water port, and Flagler decided that if he ran a railroad to Key West, he could take advantage of trade coming through the canal from the West Coast.

A creek on the Golden Orb trail.

Four thousand men battled mosquitoes, crocodiles, and hurricanes for seven years, constructing this railroad. It was hailed as the Eighth Wonder of the World when it finally opened in 1912. One year later, Flagler fell down a flight of stairs and died at age 83. 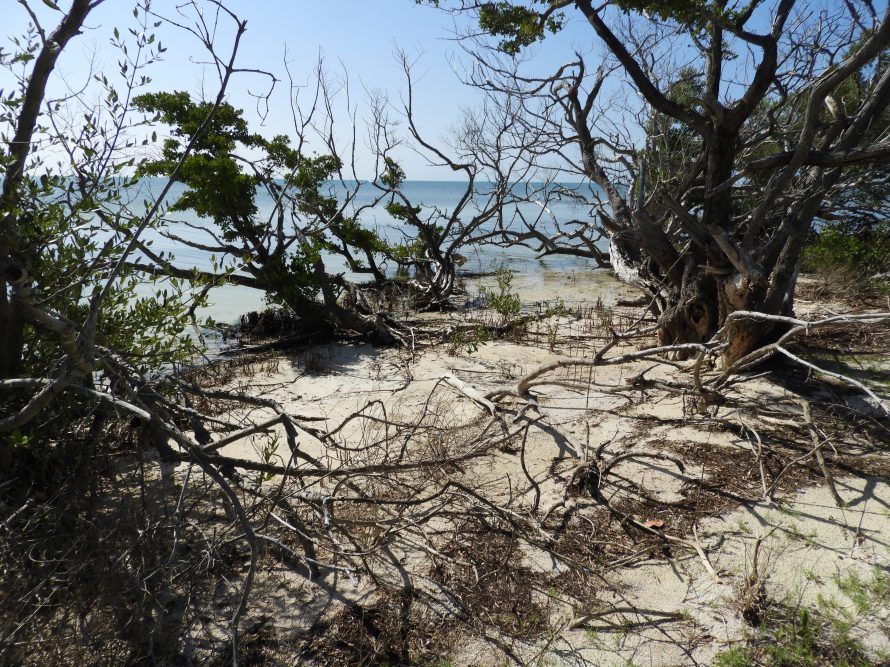 Long Key is largely undisturbed by humans (unlike me), and provides an opportunity for hikers to see the Keys in their natural state.

The automobile was gaining in popularity around this time, and in 1921 the Miami Motor Club came up with the zany idea of building a highway to Key West, alongside the railroad. They hoped it would attract tourists, revenue, and growth. They were right.

By 1928 a two segment highway had been constructed. The first segment allowed motorists to drive from Key Largo about 35 miles to Lower Matecumbe Key. Then they had to take a 41-mile ferry ride to No Name Key, which I believe was named after Clint Eastwood. From there they could drive about 35 more miles to Key West.

The forest canopy along Long Key’s Golden Orb trail. The Florida Keys is the northern boundary for many tropical trees common to the Caribbean.

Nobody likes having to take a ferry boat. So impatient motorists pressured the government to connect these two highway segments. But who would do the work? Well, let’s step back to 1924. In that year, Congress passed a bill over President Coolidge’s veto, to pay a bonus to World War I veterans, for their war service. But the catch was, they had to wait until 1945 to cash in these bonuses.

Then the Great Depression hit, and in the early 1930s unemployed veterans laid siege upon Washington D.C., demanding early payment of their bonuses. President Hoover had them driven off with bayonets and tear gas, and the bad press this generated helped cost him his reelection bid against Franklin Roosevelt.

Bahia Honda Bridge, and the beach at Bahia Honda State Park, at Mile Marker 36. “Bahia Honda” means Deep Bay in Spanish. This bridge is part of the original railroad, and was very challenging to build back in the early 1900s, due to its more than 5,000 foot length, and the 30 foot deep channel it spans.

Roosevelt knew what to do about the rebellious veterans. He started the New Deal, and put them to work on the Overseas Highway, promising them an early bonus payment upon completion of their work. This shut them up and got them out of Washington.

By 1935, these veterans were hard at work in the Upper Florida Keys, on bridge construction. But on Labor Day, 1935, a monstrous Category 5 hurricane struck. A train was sent to evacuate the veterans, but was too late. 200 of these vets drowned in an 18-foot storm surge. Altogether, 400 to 700 people in the Florida Keys perished from this natural disaster. To this day it remains the most powerful hurricane on record to make a direct hit on the Keys.

The Bahia Honda bridge was originally for trains. But after the Labor Day hurricane of 1935, a highway was built over the top of the trestles.

The hurricane damaged Flagler’s railroad so badly, it was abandoned. So the government decided to abandon the dead veterans’ work and take over the abandoned railroad. They built the middle connection of the Overseas Highway upon the railroad’s bridge trestles. And by 1938, a fully connected highway allowed automobile travel to Key West without requiring a ferry. 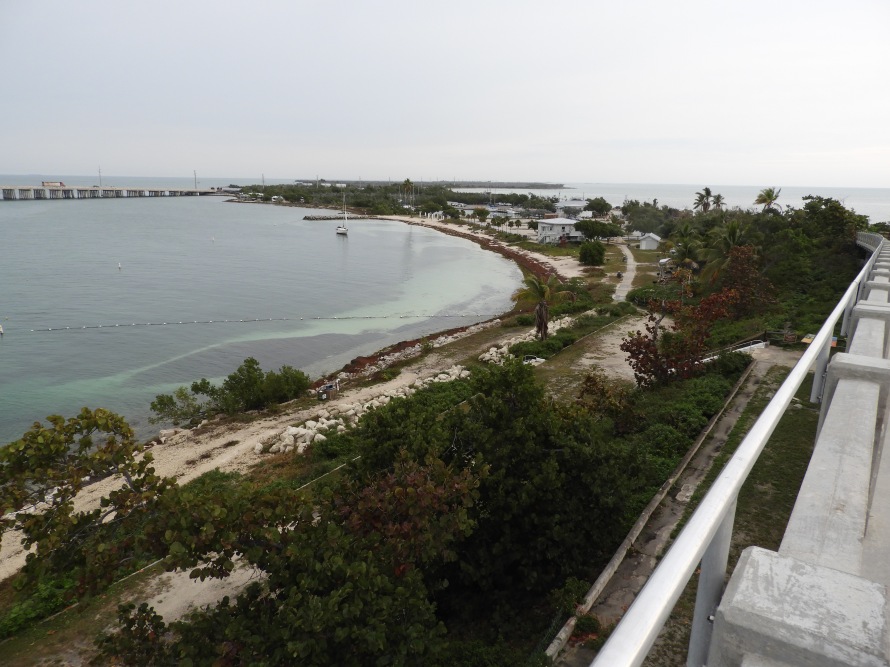 These days the Bahia Honda Bridge is deemed too derelict to safely travel over. But you can still walk it for about 100 yards up and get a nice view of Bahia Honda Key. To the left is the new Overseas Highway that replaced the original highway in the 1970s.

The Overseas Highway starts in Key Largo, at around Mile Marker 113. Mile Markers are used in the Keys to denote addresses. For instance, the first gas station you encounter is a Shell station, with the address 106501 Overseas Highway, Key Largo, FL. This means it’s 106.5 miles from the terminus of the highway in Key West, since Mile Marker 0 is at Key West.

But the Keys extend further west than Key West, speckling the Gulf of Mexico for about 70 more miles out to the Dry Tortugas. However, to get to these islands beyond Mile Marker 0, you must take a boat or plane.

Key West from the end of the White Street pier. A monument at the corner of Whitehead and South St, on Key West, claims to be the southernmost point of the continental United States, but this pier is even further south, by a few hundred feet. The actual southernmost point is probably located on Ballast Key, about 10 miles west of Key West. Key West is 77 miles north of the Tropic of Cancer, and 94 miles from Cuba.

Hurricanes seem to pose the greatest danger to residents of the Florida Keys, and I imagine bankruptcy is a close second. Homes are damned expensive there, so I wonder how many residents have gone bankrupt after their life savings have been blown or washed away?

In 1998, Hurricane Georges battered the Lower Keys, causing widespread damage and flooding. In 2005, the Keys were triple-punched by Hurricanes Katrina, Rita, and Wilma. They only brushed these islands, but came close enough to cause extensive damage. And on September 10, 2017, Hurricane Irma made landfall in Cudjoe Key. She destroyed a quarter of the homes on the Keys, and caused major damage to another two-thirds. 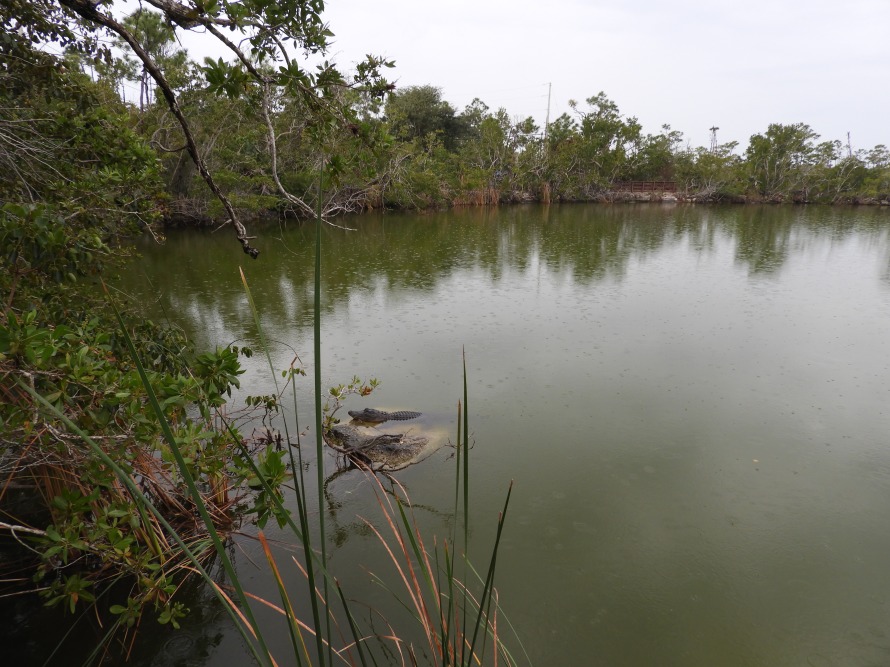 The Blue Hole, on Big Pine Key. Looks green to me. This is an abandoned rock quarry that filled with water. Notice the alligator?

Imagine being ordered to leave your home with just a few hours notice to pack whatever you can into your car. And when you return, you don’t know if you’ll find your house intact, in tatters, or in the ocean. Many people retire in the Keys, but the constant worry of hurricanes is not my idea of relaxed living.

An iguana sunning itself on a coral rock, by the beach at Long Key State Park. We were told that Floridians are encouraged to kill iguanas, because they’re an invasive species. But aren’t we humans invasive, too? So since my wife and I were not contemplating suicide, we left the iguanas we encountered, unharmed.

The Keys are flat as pancakes, offering scant high-ground refuge from storm surges. Most Caribbean islands are volcanic, with mountains and hills. But the Keys are made of ancient coral reefs and limestone, which don’t attain high elevations. The highest point in the Florida Keys is just 18 feet above sea level, at Windley Key. That’s not much of a view.

But below sea level the view can be spectacular. The Great Florida Reef is the only living coral barrier reef in the continental United States. And it’s the third largest coral barrier reef system in the world, after the Great Barrier Reef, and the Belize Barrier Reef. The best of it is found off the coast of Key Largo. And scuba divers come from across the globe to enjoy it, making Key Largo the Dive Capitol of the World. Yeah, it’s a real dive.

An osprey at Bahia Honda State Park. This bird was a good fisher. We saw it carrying a big, long fish, but unfortunately my camera was not handy at the time. It’s the photo that got away.

We drove the entire length of the Overseas Highway, and spent four days and nights on Little Torch Key, at Mile Marker 28.5. The balmy February weather was a pleasant change from the cooler climate we came from. And most importantly, it wasn’t hurricane season.

With that fact in mind, we were able to relax and enjoy our stay.