Death At A Well

This is Story #13, entitled Death at a Well, from my book, Go West or Go Weird.

Flash fiction is the art of writing a very short story, or the “short short”. Generally, 1,000 words or less is considered to be flash fiction, although some claim stricter limits. I’ve dabbled in this art a few times, but not nearly as much as Carolyn, in her blog, joyroses13.

I think death is a subject well-suited for short shorts. I mean, why not? Death shortens everything.

In fact, the world’s shortest piece of flash fiction is sometimes touted as this six-word tale: “For sale: baby shoes, never worn.” Legend has it that Earnest Hemingway wrote this tiny work, but this is unlikely, for it first began circulating when he was 10 years old.

I wonder if Hemingway got the attribution because someone wanted to lend literary value to this story. But a six-word tale is hardly literature. After all, there’s no real plot development in a mere six words. It can be argued that to qualify as a genuine short story, the writer must invest enough words to immerse the reader in a plot, and leave them with the sense that they’ve been involved in a complete story.

I once read that the world’s shortest story, containing enough plot development and enduring appeal to qualify as a bona fide work of literature, is an ancient Arabian fable. And of course, it’s about death. This fable has been written in different ways, but here’s a 176-word version:

There was a merchant in Baghdad who sent his servant to market. Shortly, the servant came back, white and trembling.

“Master, just now when I was in the marketplace, I was jostled by a woman in the crowd, and when I turned I saw it was Death. She looked at me and made a threatening gesture! Now, lend me your horse, and I will ride away from this city and avoid my fate. I will go to Samarra, and there Death will not find me.”

The merchant lent him his horse, and the servant mounted it, dug his spurs in its flanks, and as fast as the horse could gallop, he went. Then the merchant went to the marketplace, and saw Death standing in the crowd, and confronted her.

“Why did you make a threatening gesture to my servant when you saw him this morning?”

“That was not a threatening gesture. It was only a start of surprise. I was astonished to see him in Baghdad, for I had an appointment with him tonight in Samarra.”

The first time I read this story, and learned that it was the world’s shortest short story, I decided to break the record. I wanted to immortalize my name, by writing a story even shorter than this. A story that would have substantive plot development and enduring appeal. So I wrote my own tale about Death.

But wordmongering got the best of me. I was undisciplined. I indulged in too much verbosity and failed to beat the record.

So like the Baghdad servant, the name of Tippy Gnu is doomed.

What follows is my 460-word failed attempt at immortality, with my own piece of flash fiction about an encounter with Death. 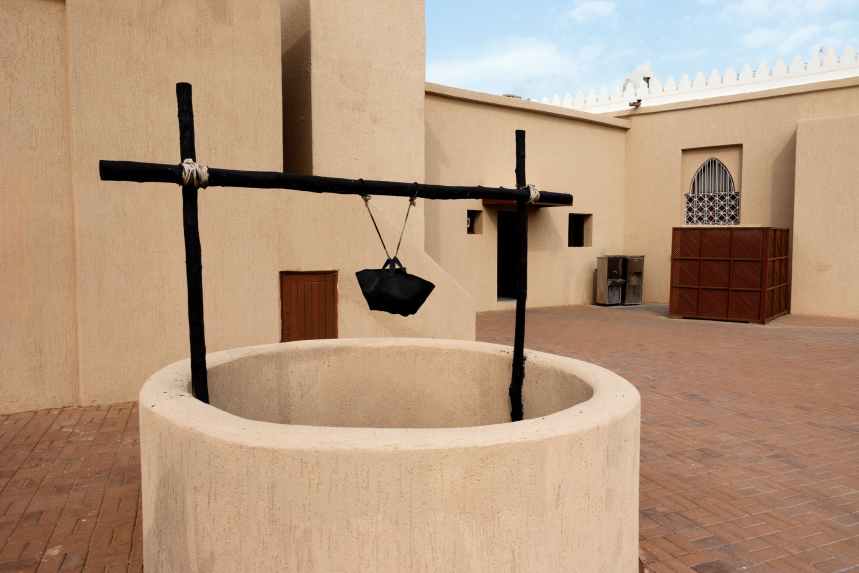 Death At A Well

One day, Death on horseback rode out of the desert to a certain house where a man had a well. He appeared parched thirsty and asked the man for a drink. Being very afraid of Death, the man was quick to allow permission, and Death dipped a drink from the well.

“I’ll make you a deal,” said Death, after he finished swallowing. “If you save this well for me alone, and let no others taste from it, I will make you immortal.”

Naturally this keeper of the well desired eternal life, so he eagerly agreed.

Thereafter he had to fight off many a person. Usually passing strangers who desperately needed water after a long, hot ride through the desert. He killed most of them, but they never succeeded at harming him. He was immortal, but they did not know that, or they would not have fought him. And none of them ever got a drop from his well.

He turned aside hundreds of travelers who had depended on his well for water. Most of those who did not die fighting him, perished of thirst later. Only a few ever survived.

However those few spread the word, and eventually the well developed a reputation for being inaccessible. Thus travelers came less and less often, and there were fewer and fewer people for the keeper to kill. Until finally, no travelers passed through the area anymore.

One morning the keeper of the well spied a lone horseman approaching from the desert. When the rising sun glinted off the white bones, he knew the rider to be his friend, Death. The keeper waved a hand of greeting as Death grew closer. But Death did not acknowledge it.

Death rode his black horse to the edge of the yard and drew a long bow made from a rib bone, and an arrow made from an arm bone. He took aim at the surprised keeper of the well and shot him through the stomach.

The wound was mortal, but the keeper still had a few breaths of life in him. With fading eyes, he looked up at Death and asked why he had not lived up to his end of the deal.

“I have lived up to the deal. Did I not say that no one should drink from the well, but me?”

“And no one has,” the man sputtered.

“A lie. Since we made the deal I have watched the well every day. And every day I have seen you, yourself, dip the bucket into the well and quench your own thirst.”

Suddenly the keeper comprehended his mistake, and a fire of realization burned in his eyes.

But a chilly wind from the mouth of Death blew the fire out.

Click to the next story, to read The Lonely Wish.