We’re now at Story #5, entitled Bus Ride, from my book, Go West or Go Weird. Today’s installment is Part 1 of 2.

This modern Western is mostly a true tale. I’ll point out the one part that isn’t true, later on. This story is about visions of Texas instilled into the heart of a California dreamer. I was that dreamer, though I wrote this autobiography in the third person, with a changed name.

I was a young man who had left southern California to spend my last school year in upstate New York. I went through a culture shock during my senior year of high school, having been born and raised in California, and not accustomed to east coast ways.

But the greatest shock came from my new stepmother, whom my father had just married. My stepfather was a giant asshole, and he and I didn’t get along. I thought for sure my dad could do a better job at picking a spouse than my mother had. So I traveled across country to live with these newlyweds, and escape the abuse from my stepfather.

So after I graduated high school, I forlornly decided to return to my mother’s house, put up with her asshole husband, and attend college in the state of my birth.

My dad felt disappointed, and wasn’t about to spend any money on a plane ticket. Instead he had my stepmom drop me off at the Greyhound bus station, with a one-way ticket back to where I came from.

And I was nearly devoured on that bus ride.

A ten-hour trip to Grand Central Station from Ticonderoga, New York, left me feeling tired and anxious. But then I met a helpful man. A smooth-talking Texan who called himself John Lash.

Lash had a slick tongue, cool eyes, and the quiet, patient instincts of a hunter. And I, the disaffected 18-year-old, returning from one dysfunctional home back to another, was the unsuspecting and vulnerable prey.

Let this tale serve as a cautionary lesson to young adult men and women. Especially to those who need a safe place to live, yet have never known home to be a refuge. 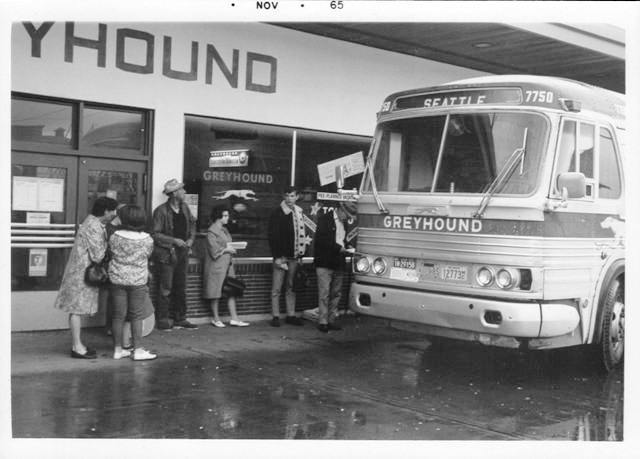 Eighteen and a tough realization to swallow: Dad’s home was worse than Mom’s. Dad’s wife was more abusive than Mom’s husband. So he decided to jump from the fire and back into the frying pan.

At seventeen he left Mom’s house and flew clear across the country to live with Dad and his new bride. But his new stepmom didn’t like him. Didn’t want him. Besides, she was a crazy, mean drunk. So when he faced a choice between east and west, he opted for a college on the west coast.

She dropped him off at the bus station. So long, you wicked witch of the east, he muttered to himself as she sped away. Depressed, disappointed, and disillusioned, he boarded the Greyhound.

Grand Central Station. A crowded, confusing mess for a small town young man who needed to make his connection. He finally found the correct terminal in the hurly-burly ruck of this massive building in the heart of Manhattan. His bewildered eyes were like searchlights, exploring the proper way to go, while at the same time attracting attention.

“Need help?” he heard a gentle Texan drawl. There beside him hovered a tall lank man in a cowboy hat, about ten years older than him. “Howdy, I’m John. John Lash. You goin’ to Albuquerque, too?”

He took in the tall Texan, warily scanning him up and down. “No,” he replied coolly, and turned his attention to studying the transfer ticket in his hands.

“Ah, California. I can see that on your ticket. Well this is the right terminal. Gets confusing here, don’t it?”

The younger man glanced back up. “Yeah, it does.” He felt suspicious and cupped the ticket so this stranger’s prying eyes couldn’t read it anymore.

Lash laughed a little. “Hey, I’m just trying to help. Well if you need anymore help I’ll be standing over there,” he pointed.

What kind of prick am I? The thought sneaked into his head. That guy seems nice enough. He felt a little guilty. A few minutes later he made his way over and introduced himself. “I’m Sal, by the way.” They shook hands.

The Texan was a very present man. He listened attentively. He seemed relaxed and self-assured. He conveyed confidence and security. And he seemed ever ready to assist with any need. These were things this young man craved from the people he associated with, yet received so rarely.

Sal gradually relaxed his guard and fell into the confidence of the self-assured man with the cowboy hat.

The bus ride carried them through the Garden State, and across the Alleghenies of Pennsylvania. What an exciting time for this young man, who’s only prior crossing of the continent occurred at 30,000 feet. Now he was getting a ground’s-eye view of America the beautiful.

John Lash befriended him, and they spent many hours in the seat cushions, next to each other, sharing stories, swapping lies, and commenting on the passing scenery.

Lash claimed to be a Texas Aggie alumnus, and regaled him with tales of his A&M years, and the exploits of the Aggie’s famed football team, and all kinds of other stories about Texas.

Sal grew fascinated with Lash and the state he hailed from. And he began to wonder if Texas might be a good place to settle down and start a career. This was an important consideration for a fledgling like him, with his whole life ahead of him.

Just past a cup of coffee at Hubbard, Ohio he began to to voice this interest to John. The cowboy squinted two approving eyes at him, then lowered his voice and quickly promised, “We’ll talk about it later.”

He then stood up from his seat, swaggered up a few rows, and plunked down next to a pretty young lady who had just boarded at Hubbard. He sparked a conversation with her, and it seemed his charming, genteel ways won her over within minutes.

Sal felt instant jealousy. He was attracted to Lash. Not in a sexual way, for Sal liked pretty young ladies also. But in a comradely way. But now it appeared he had to share his new friend’s attentions with this muliebrity that had transfigured the bus.

Finally the nubile one disembarked a long eight hours later, at her destination in Indianapolis. Lash returned. Now, as promised, the cowboy discussed Texas as a place to live.

But, he pointed out, New Mexico was even better.

For the first time, he brought up copper mines. He was employed at a copper mine in New Mexico, he revealed. The work was hard, but not too hard, and it paid very well, according to him. Between Terre Haute and St. Louis, he spun yarns and otherwise expounded at length on his experiences in this occupation that he described as the best thing that had ever happened to him, making it seem magical to the ears of the young man beside him.

The bus stopped for awhile in Joplin, and they got out to stretch their legs and walk the town a bit. A Mexican man in his 30’s, named Santino, had joined them for occasional conversation, on the bus, and he accompanied the two on the town walk. Their trialogue mainly consisted of comments about various sites they descried. But somehow these comments always found their way back to the copper mines of New Mexico.

Lash startled the young man when he suddenly suggested, “Why don’t you try to get hired where I work?”

“Who, me?!” Sal felt both flattered and flummoxed at the suggestion. “They’d never hire me. I’m too young, and I’ve never done that kind of work before.”

John spit a stream of tobacco onto the street. He was perpetually chewing that stuff. On the bus he carried around an empty soda pop can that he spit frequently into. “Shit!” he declared, “They’re always hiring people. Long as you’re willing to work, you’ll do good there. Pays well, too.”

Sal had never lived on his own before. The thought frightened and fascinated him. Here . . . here . . . was an opportunity to make it on his own. He didn’t need college. He didn’t have to go back to living in an abusive home. Why, he could get a good job in New Mexico and never have to live under the roof of an abuser again.

He promised John he’d think about it.

End of Part 1. Come on back tomorrow for Part 2, and the conclusion to this tale.