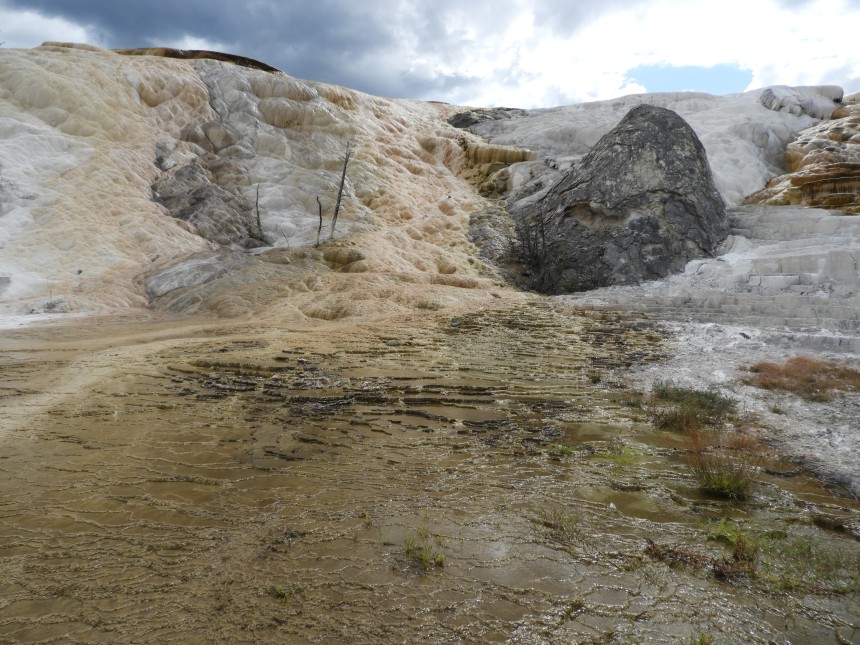 Mammoth Hot Springs Terraces display their beauty about five miles south of the Montana border, in northwestern Yellowstone National Park. They’re one of the most popular features of Yellowstone, and are packed with my least favorite of all wild animals. The Tourist.

Alcoholism runs in my family. But I doubt we’re special. It probably runs in every family. My Dad, Orin Scully Gnu, was a wonderful, beautiful person to know. But he was also an alcoholic. I know this because he died of the DTs. And I believe you don’t die of the DTs unless you’re an alky.

Like father, like son. My brother, Rowan Waters Gnu, is also an alky. At least in my opinion. And so is his wife, Connie Tipples Gnu. In my opinion. And perhaps you’re thinking I am too, from of all these crazy family names I invented. 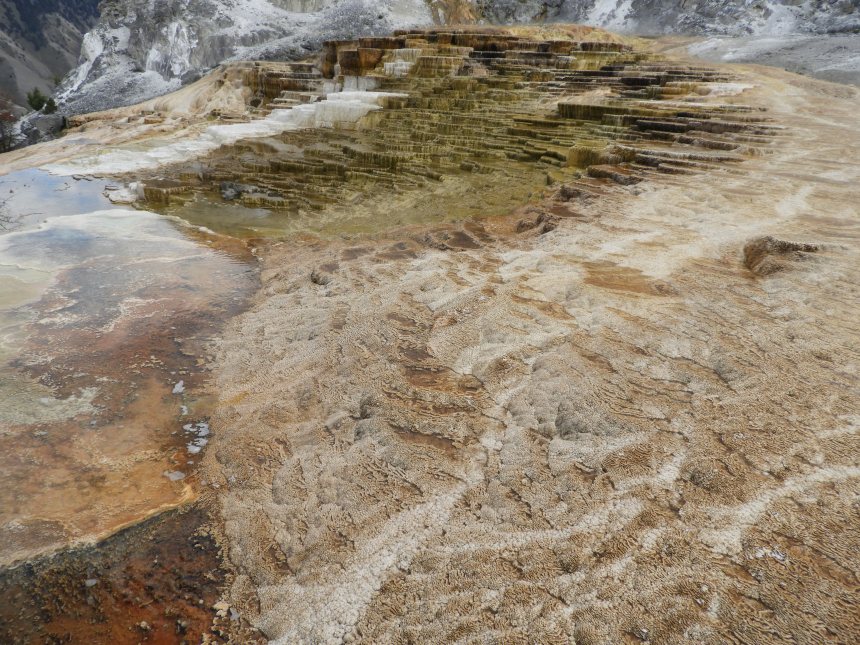 Mammoth Hot Springs is actually a complex of many hot springs, created over thousands of years.

But no, I quit drinking alcohol several decades ago, before any addiction could set in. I consider alcohol to be one of the deadliest poisons human beings commonly consume. It’s even worse than coffee. According to Psychology Today, alcohol kills nearly three times more people than all other drugs, combined (88,000 per year, compared to 30,000). 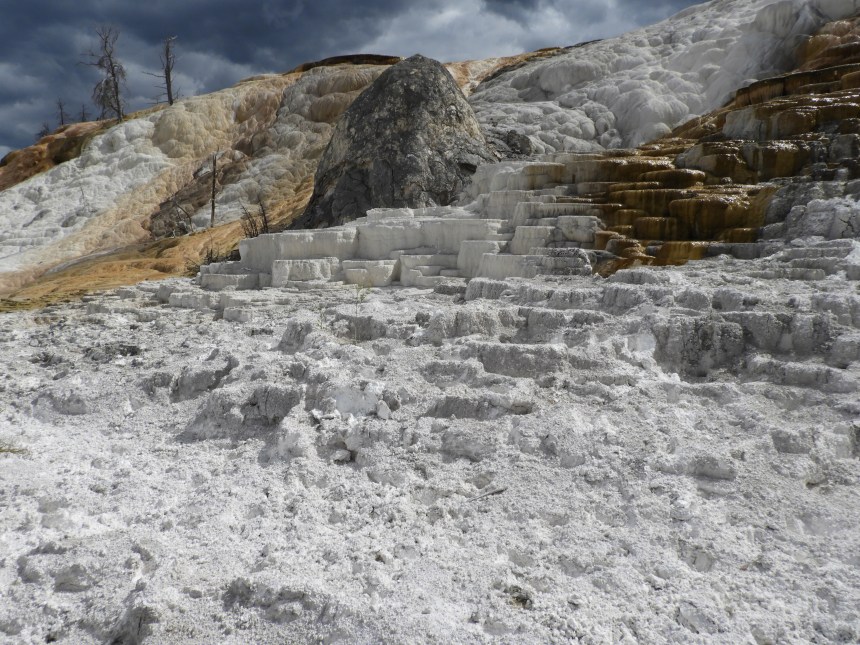 The largest known carbonate-depositing spring in the world is found at Mammoth. In fact, more than two tons of calcium carbonate flow into Mammoth each day. Which is probably enough to keep the whole world permanently free from heartburn.

I was a binge-drinker when I did drink. And I could get pie-eyed. There was that time a designated driver took me to a concert. I got so sozzled, that after the concert I insisted on finding my own car and driving home. I’d forgotten someone had driven me to the concert. And when I couldn’t find my car in the parking lot, I wanted to call the cops and report it stolen.

I shudder at what might have happened, had I not had a designated driver that day. 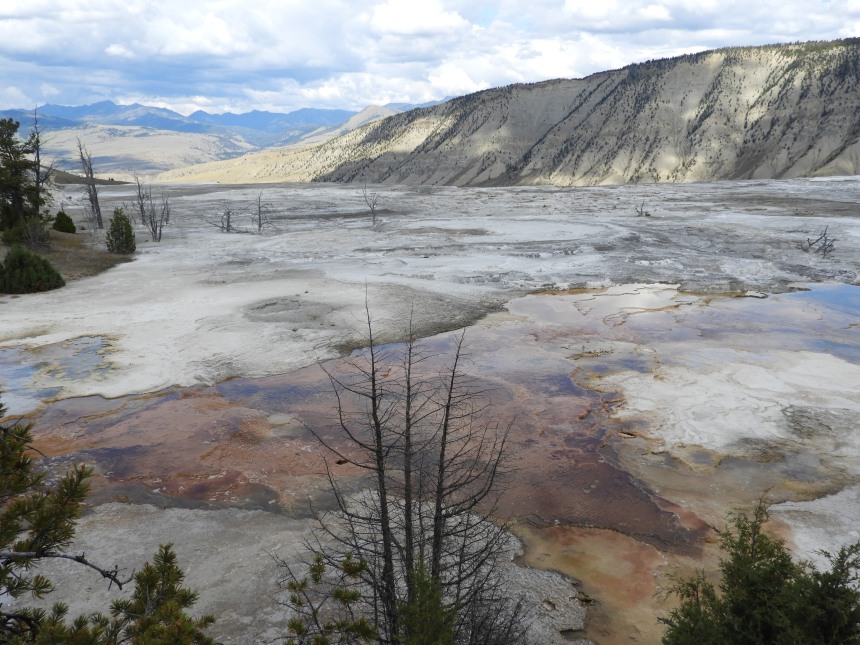 The calcium carbonate at these springs comes from limestone along a fault line that runs from within the Yellowstone caldera to Mammoth, which is outside the caldera.

But I’m a lightweight. A lot of drinkers handle booze better than I could. And some function better drunk than sober. Babe Ruth’s performance-enhancing drugs of choice were beer and Scotch whiskey. My Dad became superman after a six-pack. Alcohol is a miracle drug for my brother, too. 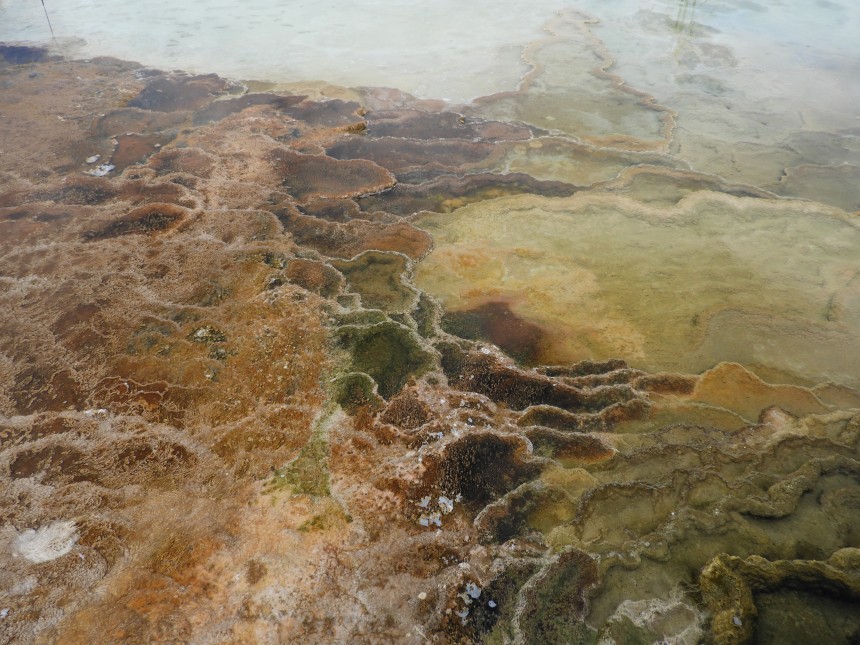 Travertine comes from geothermal vents, and there’s plenty of travertine at Mammoth. It accounts for the fibrous and concentric textures and patterns in the terraces, and the polychromatic appearance of white, tan, cream, and rust. Algae also accounts for some of the colors, especially the browns, oranges, reds, and greens.

Rowan and Connie have made a drinking rule for themselves. They don’t tipple until after 6:00 pm. But along about 4:00 or 5:00, you can hear them talking, salivating, and counting down for six. And as soon as that magic witching hour rolls around, pop go the beverage tops.

There’s a labyrinth of of stairways at these springs, that can seem endless, dragging your feet to higher and higher heights. My wife, Kay’s, coxalgia kicked in, and she quickly gave up and returned to the car. But not before gaining an eyeful of beauty that can be found at the bottommost level.

Rowan’s a beer man. He guzzles that shit down like water. Like he’s rowin’ in water. His preferred brand is Corona. But Connie tipples the hard stuff. She pours Diet Dr. Pepper into a tall tumbler, and tops it up with rum. 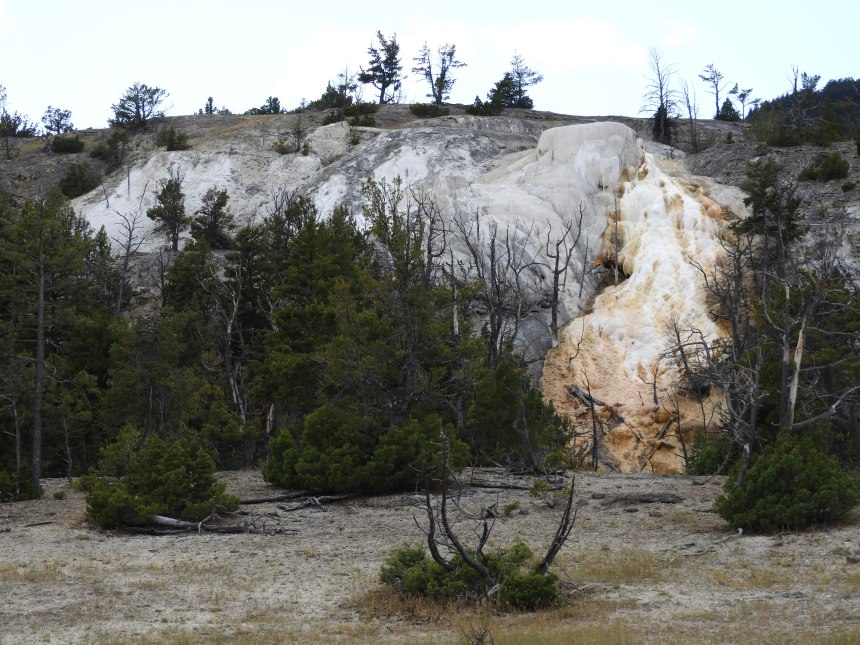 Up another level, and Connie stopped for a rest, with panting, sweating resignation. “D-don’t worry about me,” she heroically gasped,“I-I-I’ll be okay. I-I’ll catch up with you guys. Y-yes, yes, I-I’ll catch up. And if I can’t make it. I’ll find Kay. Back at the car.” So we continued on without her. And we never saw her again.

Rowan has a game called “Washers” that involves tossing large round, metal washers, into a box. It’s similar to horseshoes. We played that game at his campsite during the evenings, after finishing our Yellowstone sightseeing. And he kicked my ass most every game. 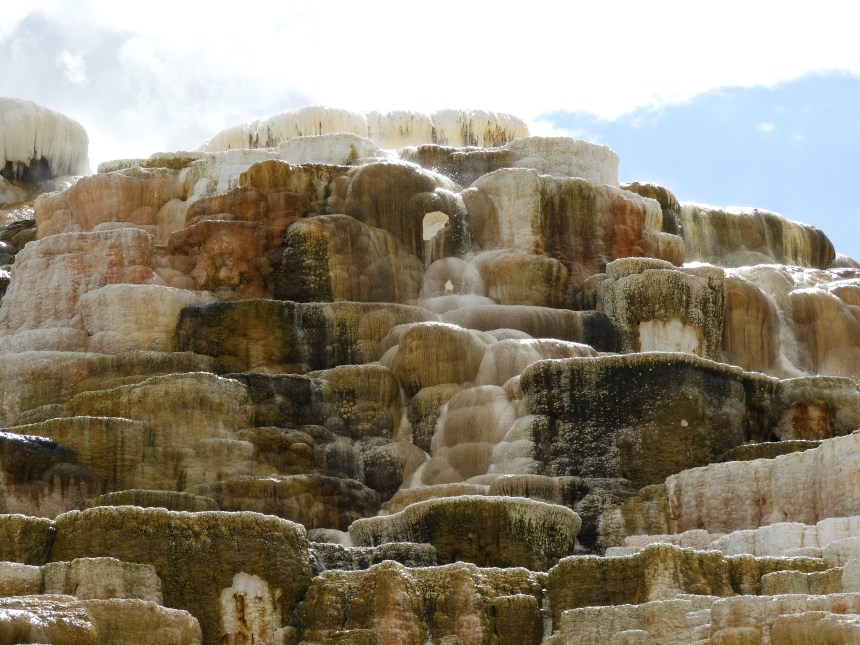 My grandnephew, Wiley Cody, Jr, was being a clever coyote. At 20-years-old, he could outwalk all of us old folks, and he got way ahead. He wasn’t about to let Rowan and me call him back so we could return to the soft, inviting comforts of my automobile, and drive back to our cozy campground.

You’d think with all his drinking, I could beat him. But no, in fact with each beer he only got better. And his sense of humor only got sharper and wittier. He’s just like my Dad. Dad’s game was pool. And you wouldn’t want to play pool against my father for money, after he’d put away a six-pack or two. But you wouldn’t mind hearing the laughter and humor. He was funny as hell. Just like my brother. 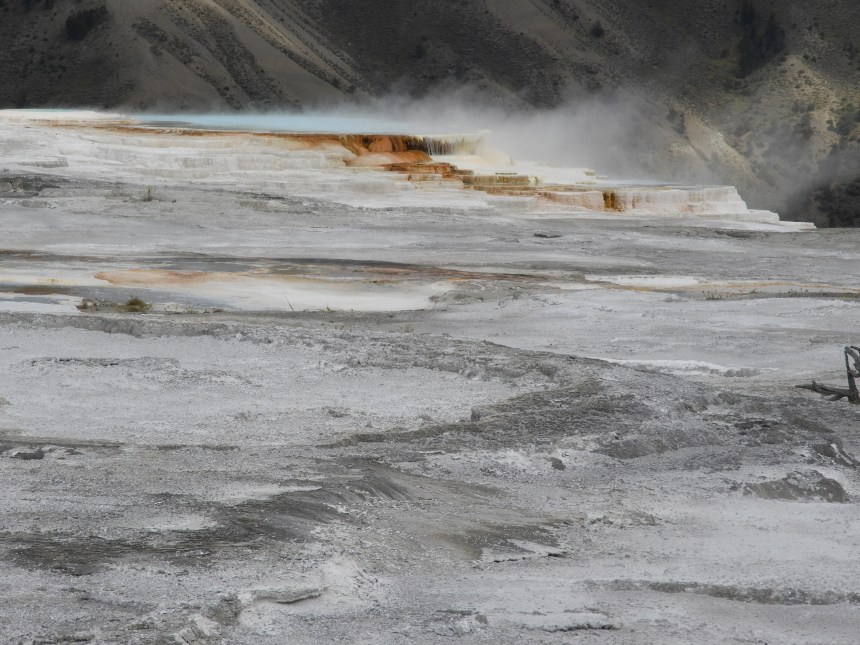 So we had to chase the fucker down. But the faster Rowan and I walked, the swifter he proceeded, disappearing higher and higher up staircases and hiding between hot springs terraces. Goddamned coyote.

The best way to beat my brother at a game of manual skill and dexterity, is to wait until he’s upset about something. The same strategy was effective against my Dad. 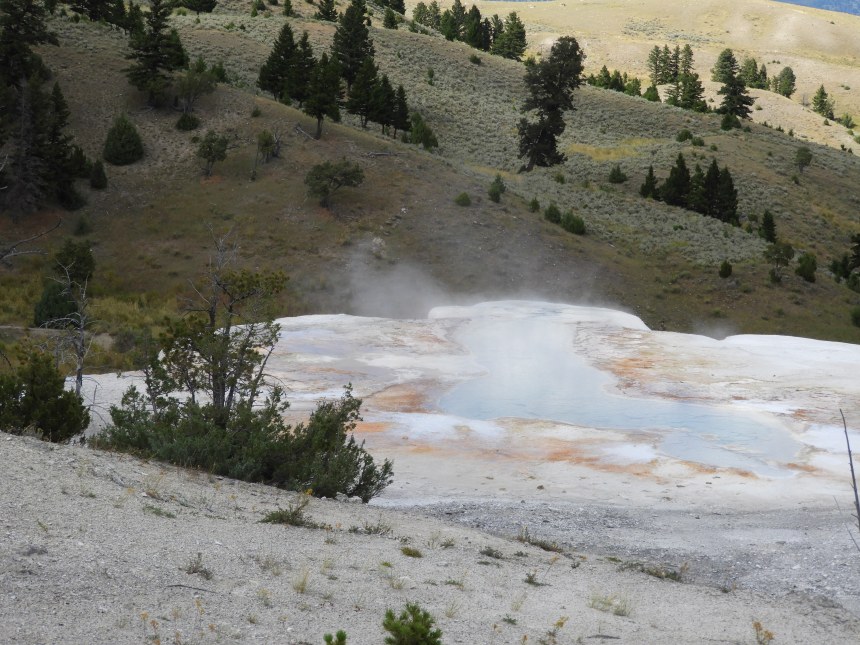 One thing that made it hard to catch up with Wiley, was that every 10 or 20 feet I was stopping to take a picture. How could I resist? There was new beauty found at every step. We were chasing a coyote through heaven.

One late afternoon around 5:45, Rowan was trying to resolve a computer issue over the phone with someone at his tax office. Nothing seemed to work, and he was feeling more and more frustrated. After he finished the call, he made the mistake of challenging me to a game of Washers. 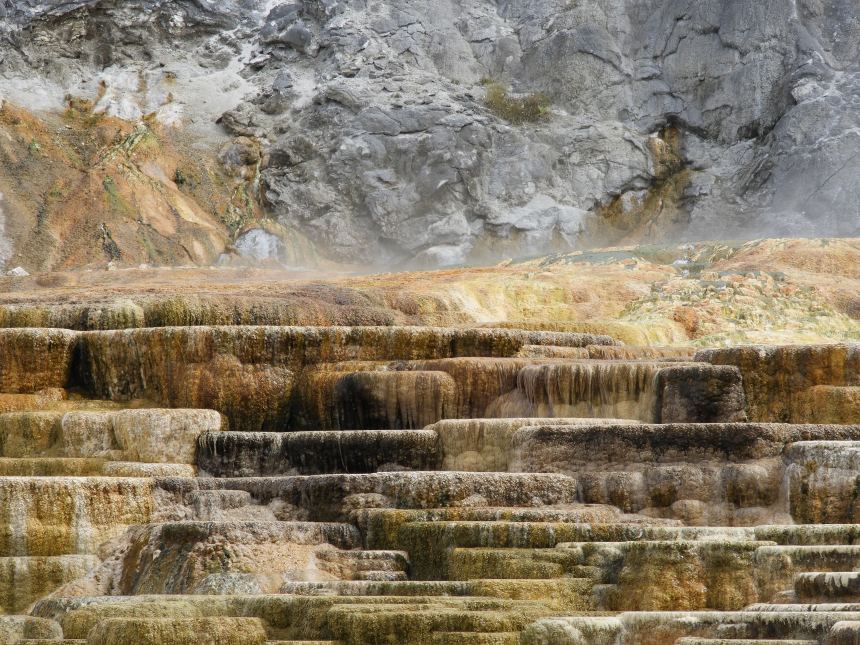 We reached a top level and found a parking lot that was nearly empty. What the hell? The bottom levels were packed with cars, and we’d thought ourselves extremely lucky to pull into a spot right after somebody pulled out. But if we’d only gone around a corner and up a hill, we would have encountered a parking paradise, and been close to sensational sights like this.

That’s when I gave up and headed back to my cabin. I had to hit the hay, so I could get up at 4:00 and drag everyone else out of bed for another fun day at Yellowstone. 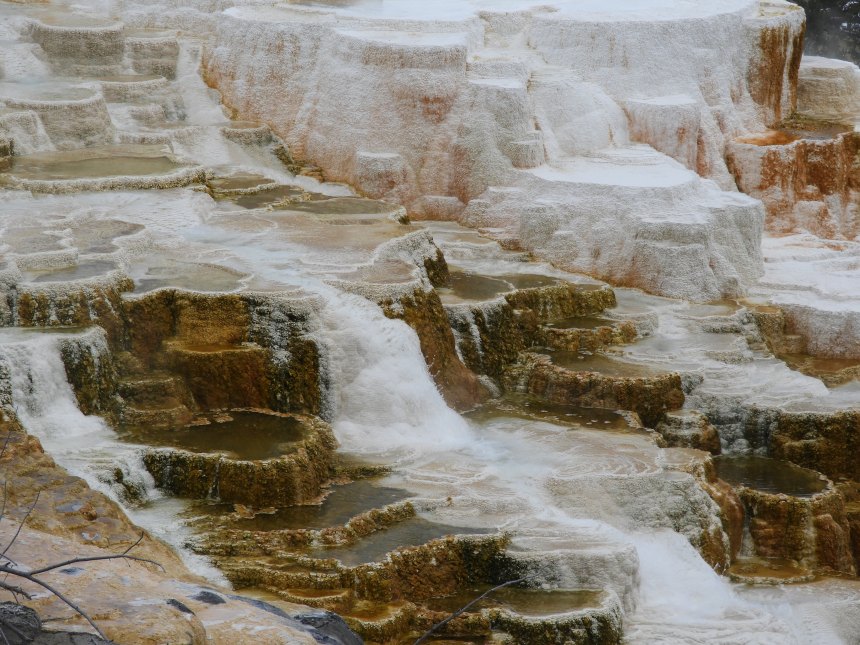 With wobbly legs, we finally cornered Wiley at a dead-end, in this remote location, far from my parked car. And in my view, this was the most beautiful hot spring of all of Mammoth. We spent a few minutes here, stunned by the visual, while keeping our cameras busy. I couldn’t be mad at Wiley. This spot made the chase all worthwhile. He truly was a cunning coyote, who’d won a place in my heart.