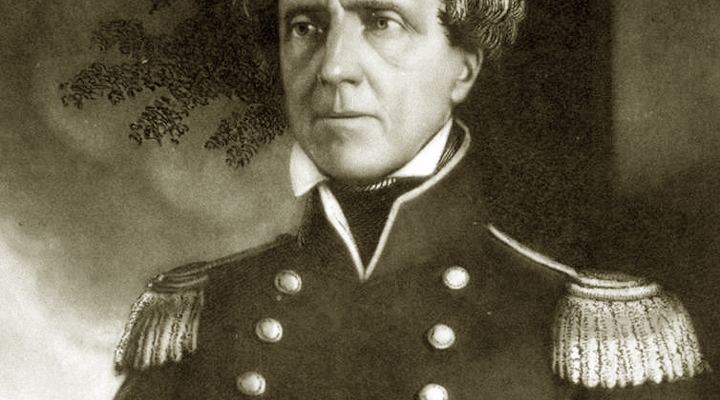 Conquering California, Part 13 of 17: The Battle of San Pasqual

This is Part 13 of a 17-part series. If your photographic memory has failed you, and you’ve forgotten the last part, you can follow this link and get yourself up-to-date.

After losing the Battle of the Old Woman’s Gun, things were looking bleak for the U.S. military. But that’s okay, the cavalry was coming. U.S. Army General Stephen Kearny had recently conquered New Mexico, and was now on his way to California with a mighty force of 300 dragoons.

Kearny was in charge of the Army of the West. In June, 1846, he led this army out of Fort Leavenworth, Kansas, and down the Santa Fe trail. In August and September, he entered Las Vegas and Santa Fe, New Mexico, and took this territory for the United States. He then headed west for Alta California.

On October 6, 1846, in Socorro, New Mexico, Kearny met Kit Carson. Carson had been tasked with carrying messages to Washington about the state of hostilities in California. Carson assured Kearny that California had been secured and the situation was well under control. And a very fine officer whom he knew personally, named Captain Gillespie, was keeping the peace in Los Angeles.

I guess Carson failed to watch CNN at any of the motels he stayed at, after leaving California. Instead he must have watched FOX.

With this reassuring fake news, Kearny sent 200 of his precious dragoons back to Santa Fe to aid with the occupation there. He also sent Carson’s message east with a different courier, and asked Kit to guide him to California.

Now Kearny only had 100 dragoons. And their mounts were worn out after having already traveled over a thousand miles. But Kearny encountered a herd of mules being driven to Santa Fe, and he seized on the opportunity by purchasing 100 of them. These new mules replaced the worn-out mounts. The only downside to this transaction was that these mules were untrained, and kind of difficult for his dragoons to handle. And we can assume they were rather stubborn.

Finally, in late-November 1846, Kearny and his tired men crossed the Colorado River. They headed toward San Diego, over the Colorado desert, and over the coastal range of mountains. And that’s when he encountered the deposed tyrant from Los Angeles, Major Archibald Gillespie, with a force of 30 men.

Yes, “Major” Gillespie, now. Apparently in the Marine Corps, this is the rank they promote you to when you’re a major asshole.

Major Gillespie had been tasked with the hangdog duty of informing General Kearny about the Siege of Los Angeles, and how he had lost control of the southern California occupation. On top of that, Gillespie also informed the dismayed general that a large fighting force of Mexicans was just a few miles away.

The Battle of San Pasqual

General Flores had found out about this General Kearny. So he had sent Governor Pio Pico’s brother, Mexican Army General Andres Pico, out to find him. And General Pico commanded a force of 150 highly skilled Californio lancers. 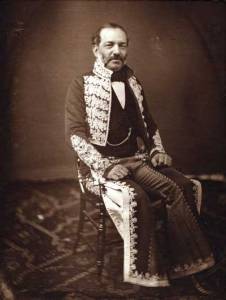 These lancers were now camped in the San Pasqual valley, just six miles away from Kearny and Gillespie, and just 30 miles northeast of Kearny’s final destination. Which was the pueblo of San Diego.

Pico was unaware of Kearny’s presence, and vulnerable to surprise attack. But Kearny wanted to assess Pico’s strength, so he sent out a scouting party. The scouting party approached close to Pico’s camp, and then stupidly stirred up some noise. This alerted some of Pico’s lancers. They gave chase, and during this pursuit some fool within the scouting party lost his blanket marked “U.S.”, along with his dragoon jacket.

From this blanket and jacket, Pico was able to surmise that the scouting party was part of a much larger force that was coming against him. In other words, the scouts sent by Kearny did more to inform Pico, than to inform Kearny.

Pico felt worried. He did not know that Kearny had left most of his dragoons in New Mexico. And it seemed foolhardy to face a force as large as he imagined Kearny’s to be. He decided it would be best to vamoose. Escape. Get the hell out of there.

The day had faded, and the tenebrous fingers of twilight were creeping over the San Pasqual valley. It had been raining, and a cold dampness that felt like death, filled the air.

As Pico’s lancers were pulling up stakes to decamp, the scouting party returned in the dark of night to Kearny, and sheepishly issued their report. Well, goddamn, fuck-it-all-to-hell, Kearny must have thought. Now he’d lost the element of surprise.

But Kit Carson and Gillespie had been reassuring Kearny that the Californios were cowards. And like many white Americans, they all thought of themselves as superior to the Spanish-blooded race. So Kearny figured that his seasoned veterans could easily whip Pico’s forces anyway, surprise or no surprise.

Kearny worried that Pico was going to try to block him from reaching San Diego. Which wasn’t true. At that moment, Pico was actually trying to get the hell out of Kearny’s way.

With this worriment, combined with racial hubris, Kearny made one of the stupidest decisions in U.S. military history. He impulsively decided upon an immediate attack.

It had been pouring rain all day. Their firarms and gunpowder had been drenched. Worse than that, nobody bothered to check their firearms, in their haste to prepare for battle. Had they done so, the attack would have undoubtedly been called off. But instead, Kearny sent his men into battle virtually unarmed.

An oval-shaped moon hung halfway up the sky, and the midnight air was cold and wet. Pico’s men were still in camp, in the process of leaving. Kearny’s men rode their mules up a ridge, about a mile or so from their camp, below. The general boldly pointed his saber, and ordered his men to surround the camp and take as many prisoners as possible.

They descended in a column down a rocky path, and were soon immersed in low clouds and fog. Things started to get confusing, in the misty moonlight. It was a literal fog of war. Kearny ordered a trot. But one of his officers at the front, whose name was Captain Johnston, misheard. He raised his saber and shouted “Charge!”

Kearny is quoted as having exclaimed, “Oh heavens! I did not mean that!” Yeah, right. I’ll bet it was more like, “Holy shit! I didn’t say ‘charge’, goddamnit!”

The men on mules were more than a thousand yards away from Pico’s camp when they began galloping helter-skelter toward the lancers. Captain Johnston rode straight up on some of Pico’s men, and they opened fire, killing him instantly. The Californios had few guns, but they had apparently taken better care of their gunpowder than had Kearny’s dragoons.

Pico’s men grabbed their lances and horses and fled down the San Pasqual valley. An officer named Captain Moore ordered another charge, and off the unarmed dragoons galloped, pursuing the armed, retreating lancers.

The mules under Captain Moore’s dragoons were untrained, and some in poor condition. They all galloped at a different pace. Soon Moore’s men were stretched out in a thin, scraggly line, in their pursuit.

Suddenly the lancers wheeled about. They realized how separated from each other their pursuers had become. And in the gray moonlight, they noticed how ungainly they rode, upon their untrained mules. And besides, they had pride. They weren’t about to allow men on mules chase them down.

They were highly skilled horsemen, these lancers. And now was time to put their skills to use. They began surrounding isolated soldiers. They swung their reatas, and lassoed them off their mules. And then they stabbed them to death with their willow lances.

Among those killed was Captain Moore.

Whenever dragoons tried to defend themselves using their firearms, all they heard was a click. They realized that with their wet gunpowder they were defenseless, and could do nothing but attempt to flee. And so the pursuers became the pursued, while being systematically hunted down in the glimmering fog, lassoed, and skewered.

Pico’s lancers surrounding Gillespie, at the Battle of San Pasqual.

Some of the lancers recognized the hated Gillespie, and they enveloped him and stabbed him repeatedly. They drove a lance into his chest, just above his heart, piercing his lung.

General Kearny was not immune. He took a lance wound to his back.

This desperate fray lasted just 15 minutes. But during that time, the lancers slaughtered 17 to 30 of Kearny’s men (accounts vary), with many others wounded.

Kearny and his soldiers fought back hard with all they had. Which was just rifle butts and sabers. But it was enough to allow Kearny, Gillespie, and the remaining survivors to retreat to a low hill, now known as Mule Hill.

Pico promptly surrounded them. And in the ensuing hours before dawn, he could have moved in and massacred them before they had a chance to dry their gunpowder. To this day it’s unclear why he did not. But it could be that he sensed the overall cause of the Californios was lost, and he was pondering the possibility of amnesty.

Kearny was blocked for several days by Pico’s lancers, and could not break through. But Kit Carson managed to slip through Pico’s lines, and headed to San Diego to alert Commodore Stockton.

Stockton quickly dispatched a force of 200 marines and sailors, who dispersed the Californios in short order. They then gave Kearny escort, helping him to finally limp into San Diego on December 12, 1846.

The Battle of San Pasqual was the bloodiest battle of the California Campaign. Both sides have claimed victory in this clash, and historians still haven’t agreed as to which side actually won.

An American historian might assert that Kearny won, in that he managed to reach San Diego with most of his men. Even if some resembled pincushions.

But a Mexican historian might argue that Pico won, in that he put Kearny at his mercy, and could have wiped him out. And he managed to stall Kearny’s advance, and inflict significant casualties on Kearny’s dragoons. And most importantly, he demonstrated to racists like Kearny, Gillespie, and Kit Carson, that Californios were neither inferior, nor cowards, and were not to be trifled with.

Hell, they beat the U.S. Cavalry. And with sticks for weapons.

The fighting hasn’t stopped. Come on back in a few days, for Part 14: The Battle of Rio San Gabriel.