Conquering California, Part 4 of 17: The Instigator

This is Part 4 of a 17-part series. If you’ve already forgotten what happened in the last part, you can follow this link, and get yourself up-to-date.

Army Captain John C. Fremont seemed like the perfect man for a dirty job. A dangerous and dirty job that Polk had in mind. He was raffish and reckless. Daring and arrogant. He knew the West. And most importantly, he shared President Polk’s political views on westward expansion.

Fremont was an American explorer who had already headed two successful expeditions. In 1842 and 1843, he had explored the Oregon Trail, Great Basin, and parts of California. 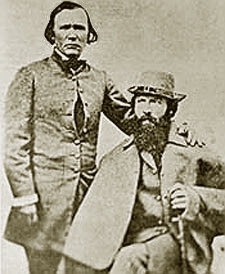 Bosom buddies: Kit Carson, standing on the left, and Fremont, seated on the right.

And he had friends in low places. During his expedition of 1842, he met a mountain man and guide named Kit Carson. He hired Carson, and they got along so well, and Carson proved so helpful, that Fremont wanted to use him in all future expeditions.

Fremont was also well-connected politically. He was married to Jessie Benton, the daughter of the powerful Senator Thomas Hart Benton, of Missouri. Senator Benton was avidly in favor of westward expansion and Manifest Destiny. Benton’s dream was for the United States to take over the entire North American continent. Yep, that included Canada, Mexico, and all the Central American countries. Benton wanted it all.

Benton had arranged Fremont’s expeditions of 1842 and 1843. But now he and President Polk had a much more intriguing expedition in mind. It involved some unscrupulous black ops for the government, that required great secrecy.

In 1845 he arranged for his son-in-law to survey the central Rockies, Great Basin, and part of the Sierra Nevada. But Fremont was secretly told that if war started with Mexico, he was to turn his scientific expedition into a military force and conquer California.

And he may have been told by his father-in-law, or maybe by the president himself, a few other things. Not specific things, but hint-hint inferred things. Things that require reading between the lines, taking initiative, and assuming all responsibility should everything go south.

The young explorer gladly accepted this assignment. He was eager to please his father-in-law, and anxious to prove himself in the line of duty.

Fremont began his 62-man expedition on June 1, 1845. But when he reached the eastern edge of the Rocky Mountains, near present-day Colorado Springs, where he was supposed to start surveying, he suddenly tossed away his official orders. He struck out across the vast no-man’s land of alpine, canyon, and desiccated desert, that separated the Rockies from the Pacific Ocean.

California was burning on his mind.

He split his party up. And on December 9, 1845, he arrived with just 17 men, at Sutter’s Fort in the Sacramento Valley. He claimed to be conducting a scientific survey. However, he began to persuade a motley mix of American settlers to form militias and prepare for a rebellion against Mexico. He promised that if war with Mexico started, his military force would protect the settlers.

Then Fremont headed for Monterey, which was the traditional capitol of Alta California, and the heaquarters of Commandante General Jose Castro. There, he lied to the American Consul, Thomas O. Larkin, and Commandante Castro, claiming that he had merely come for supplies.

In February 1846, Fremont reunited with his other 45 men, near Mission San Jose, about 45 miles north of Monterey. Now his forces were an alarming 62-man strong, and Commandante Castro and other Mexican officials realized they’d been duped. And they wondered what the hell this American upstart was up to.

Castro had enough of this shit and ordered him to leave California.

Well that was a big mistake, as far as Fremont was concerned. Nobody tells the Almighty Fremont to leave! So instead of going away, he and his crew of heavily armed surveyors headed south.

In early March 1846, they mounted Gavilan Peak (now Fremont Peak), to assess its military value. This peak commands the inland approach to Monterey. There, with astounding audacity, Fremont built a crude stockade and hoisted an American flag.

Castro responded to this insane provocation with a show of force, and a four-day Mexican standoff ensued. A Mexican standoff occurs when two parties square off, and neither party is able to proceed or retreat without putting itself in danger. So they must each hold their ground, while waiting for something to happen that would afford them a chance to end the confrontation.

And something finally did happen. U.S. Consul Larkin got involved, and was able to intervene. He told this crazy explorer that he supported Castro’s decision, and ordered Fremont out of the area.

Castro had a superior number of Mexican troops, so Fremont decided that maybe it was best to follow Larkin’s order.

Come on back in a few days, for Part 5: Fremont’s Return.