This is Part 3 of a 17-part series. If you’ve already forgotten what happened in the last part, you can follow this link, and get yourself up-to-date.

In 1845, the Californios drove out their Mexico City appointed governor, and appointed two governors of their own. This was a big event for them. But there was another big event happening in 1845, of which Californios may have only been vaguely aware. And yet it would affect them profoundly. James K. Polk had become the 11th president of the United States. 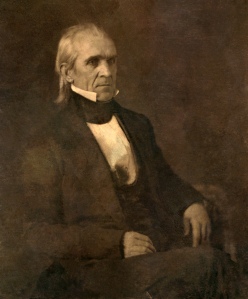 Daguerreotype of James K. Polk. This is the first surviving photo of a sitting president, taken on February 14, 1849, by Matthew Brady. Polk died just four months later, about three months after leaving office.

Polk is one of the uncelebrated presidents of U.S. history. I mean, who talks about James K. Polk? His name sounds sort of like music you’d play with an accordion. Or a funny pattern for a clown outfit. Or a poisonous weed from the South that you can turn into a salad.

And yet in my opinion, he was one of our greatest presidents. Not for his moral leadership, which is debatable, but for the magnitude of what he accomplished. He only served one four-year term. But in those four eventful years, James K. Polk increased the size of the United States by more than a third.

Polk believed he was elected with a mandate to expand the size of our nation. And he intended to do so by admitting Texas into the Union, and by acquiring the northern territories of Mexico.

Of course, this raised tensions between the U.S. and Mexico, as Mexico still claimed Texas as its own, and had threatened war if it were to become a state of the United States. And Mexico wasn’t about to let go of any of its northern territories. Not even after Polk offered to pay for them.

This tension resulted in a lot of suspicion about all the illegal immigrants pouring into Alta California from America. The xenophobic folks in Mexico City decided that maybe their open border policy wasn’t such a great idea after all. And they decided it was time for immigration reform.

They didn’t have enough money to build a big-assed wall, and America sure as hell wasn’t going to pay for one. But they did have the ability to issue edicts.

So they issued one of their infamous edicts. Edicts that Californios liked to proclaim, but never follow. This edict was to deny Mexican citizenship to any new immigrants to California, and also deny land grants, sales, or even the rental of land to non-citizen immigrants already in California.

The edict worried and infuriated new arrivals from America. They had expected to quickly become Mexican citizens, and enjoy all the rights afforded any Californio. Now they were afraid they’d be driven back out of California, and be forced to fend for themselves amongst hostile Indians in the Nevada desert.

But not all Californios supported the edict. Governor Pio Pico did, in Los Angeles. He firmly believed in keeping Alta California out of the hands of Americans. But his jurisdiction in southern Alta California didn’t have many immigrants anyway, so the edict was nothing to make a big deal over.

Commandante General Jose Castro, in Monterey, was one of those who did not support the edict. There were many American immigrants in his jurisdiction of northern Alta California. And he was feeling the heat from them, as they remonstrated against the edict. Also, Castro kind of favored being annexed by the United States, unlike his anti-American co-governor in Los Angeles.

In March 1846, Castro issued a message reassuring all who had recently arrived in Alta California that they could stay, and would not be driven out. Thus began a long history of sanctuary cities for illegal immigrants, in California.

The problem for Castro was that the immigrants weren’t so sure they could trust him. Especially since there was a scent of war in the air.

Come on back in a few days, for Part 4: The Instigator.