This is Part 2 of a 17-part series. If you’ve already forgotten what happened in the last part, you can follow this link, and get yourself up-to-date.

The Bear Flag Revolt roared through California 173 years ago, this month. But to understand why all those Bears were so revolting, it helps to go back to when the Mexicans were revolting. That began 209 years ago, in the year 1810.

They fought for 11 bloody years against Spain, and in 1821, finally won their independence. Mexico became a brand new country, stretching from the current Oregon border, all the way south to Central America.

That’s a mighty long spread. It’s about 2,700 miles, as the buzzard flies.

Their most northern territory was Alta California. Alta, by the way, means Upper. There was also a Baja California, and Baja means Lower. The separation point between the two Californias was right around where it’s at today, at the current international border, between San Diego and Tijuana.

At that time, Alta California covered a huge-assed amount of territory. It consisted of what are now the states of California, Nevada, Utah, much of Arizona, and parts of New Mexico, Colorado, and Wyoming. Yeah, it was even bigger than Texas. So take that, Texas. 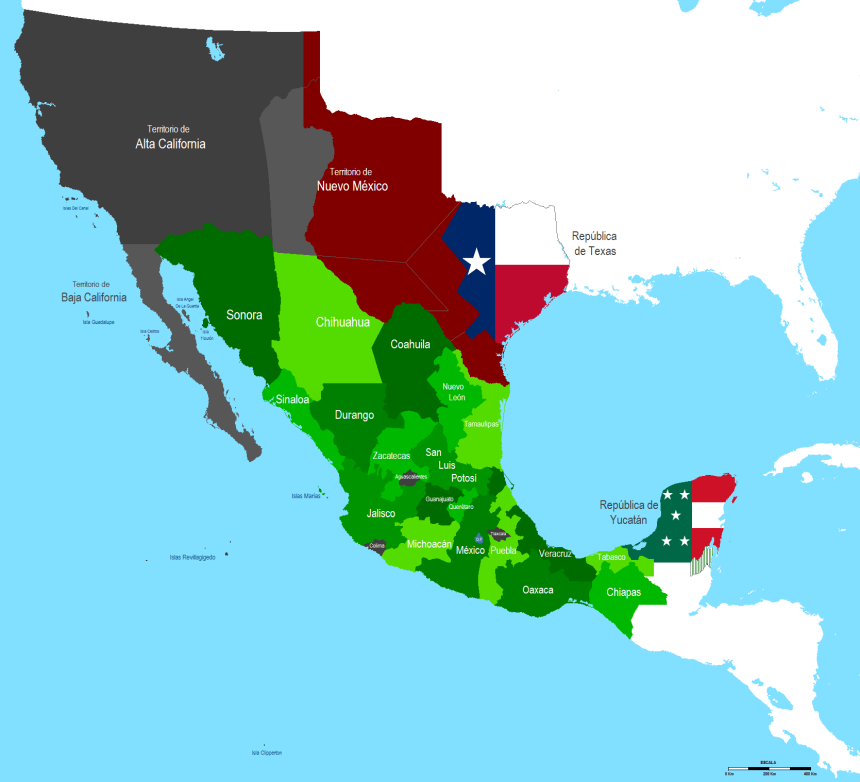 The boundaries of Alta California and other Mexican territories, states, and claimed lands, in 1842. At this time, Mexico still had not given up on Texas, and this would help spark the Mexican-American War, that began in 1846.

But most of this humongous territory was unoccupied, except by Native Americans. The Mexican inhabitants were known as Californios. And almost all the Californios lived west of the Sierra Nevadas and Colorado River, in what is now the state of California.

Did Mexico appreciate owning this vast amount of real estate? Not hardly. Mexico’s capitol, Mexico City, was over 1,800 miles away from Alta California’s traditional capitol of Monterey. And the Mexican government was bogged down in all kinds of political intrigue. They didn’t have the time, attention span, or political will to bother themselves much with their faraway land up north.

Alta California was like a latchkey kid that had to fend for itself and survive independently, the best it could. This allowed it to evolve into a semi-autonomous region, where local rule prevailed over federal rule. Californios became frustrated with Mexico City. They even debated as to whether they should remain with Mexico, seek independence, or allow Great Britain, France, or the United States to annex them.

Oh sure, sometimes the politicians down south would pay token attention to their lonely child up north. Like a parent who hollers from another room, the central government in Mexico City would issue edicts to Alta California. And like a passive-aggressive child who hollers back reassurances of cooperation, these edicts were acknowledged by Californios and supported with public proclamations.

But they only enforced the edicts they liked.

Finally, in 1842, the central government decided that Alta California was becoming too upstart and independent. So they appointed a tin god named Manuel Micheltorena to be the new governor. And they recruited a small army of thugs to go up there with him, and show those recalcitrant Californios a thing or two.

This army consisted of men who’d been convicted of crimes and given a choice of going to jail, or going up north to help the new governor. They were derisively referred to as cholos.

The cholos enabled Micheltorena to travel to Alto California with all the swagger and pride of a gangster. When he arrived and assumed the governorship, the only pay he gave the cholos was what they could rob from the citizens.

And so a reign of terror descended upon the Californios, as the cholos raped and pillaged and ravaged the countryside, all under the approval and supervision of the new governor.

By 1845, the Californios had enough. They formed a militia and fought back, and in the Battle of Providencia, forced Micheltorena and his thugs to flee back to Mexico City.

The victorious militia decided they weren’t going to accept anymore governors appointed by Mexico City. Instead, they replaced Micheltorena with two Californio governors they appointed themselves.

Pio Pico was to govern southern Alta California. He made his capitol The Town of Our Lady the Queen of Angels of the Porciuncula River. And if that sounds like a mouthful to you, then just call it Los Angeles. Or, even better, call it L.A.

The naming of their own governors was a big event in Alta California. And Mexico City wisely gave in, shrugged their shoulders, and decided to support it.

Come on back in a few days, for Part 3: Polk Salad.

35,286,078 followers, including the latest tally of Earthling followers, below: