The Mission to End All Missions

It seems the Catholics were good at building missions, but confusing as hell at naming them.

Solano is the Spanish word for Sonoma. And Sonoma is a Native American Miwok word that means, “Valley of the Moon”. Miwok legend has it that the moon rose from Sonoma valley. But I suspect those Miwoks just sampled a little too much Pinot Noir one evening.

Sonoma, California is a quiet, wine country town, with a current population of about 11,000 winos. Well it’s quiet now, but at one time it was the place to go if you were looking for trouble. That’s because it was once the site of Catholic in-fighting. And the Mexicans and Russians rattled their sabres here. And not to be left out, the Native Americans got in on the action, and raised some holy hell in these parts. And most famously, this is the site of the Bear Flag Revolt.

This prickly pear cactus outside the mission might symbolize the prickly situations often encountered during the early days of Sonoma. Or perhaps it symbolizes the prick who founded the mission.

Finally the citizens had enough of all the tumult going on in their town. They turned their troubled waters into wine, and mellowed out. Hic. The world-renowned California wine industry was born in Sonoma in 1857, with the establishment of the state’s first commercial winery. Hic. And California has continued to grow mellower and mellower ever since. Hic.

But that’s boring. Let’s go back to this town’s exciting and controversial beginning.

Mission Sonoma was the mission to end all missions. It was the last to be established, of California’s 21 centers for brainwashing Native Americans. And it’s the only mission to be established under Mexican rule. It came to be on July 4th, 1823, our Independence Day holiday, and nearly two years after Mexico achieved its own independence from Spain. 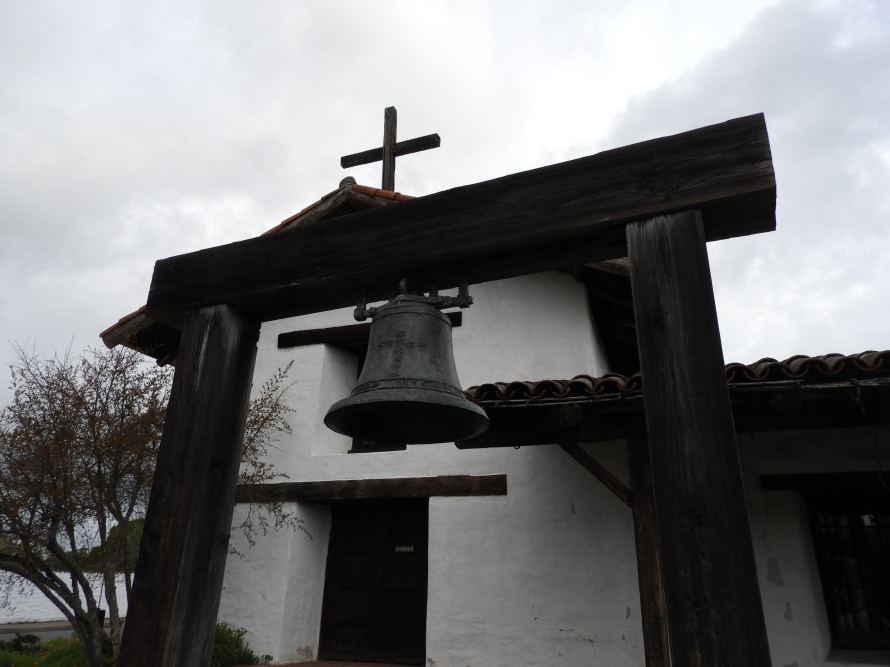 This bell in front of the mission is rang annoyingly and incessantly during the Christmas season, by someone from the Salvation Army.

It was kind of a red-headed stepchild. The Catholic Church didn’t want this mission. But Father Jose Altamira did. The rule was that if you wanted to establish a new mission, you must ask permission from the Padre-Presidente. At the time, this was Father Sarria, the founder of nearby Mission San Rafael Arcangel (which I posted about, a week ago).

But Father Altamira must have guessed that Father Sarria would say no. So he said to hell with him, broke this rule, and instead asked permission from Luis Antonio Arguello. Who? Why, he was California’s first governor, under Mexican rule.

And the governor liked the idea. He wanted to close Mission San Francisco de Asis and Mission San Rafael Arcangel, and have a new mission further north for countering the Russians at Fort Ross.

Fort Ross had been established by the Ruskies in 1812, on Bodega Bay, just 50 miles north of San Francisco Bay. Those greedy bastards were trying to take over California.

The governor hated communists, or whatever they were at the time, and so gave his permission. And soon construction began.

But when Father Sarria found out about this, his face turned florid, his eyes bulged out, and he nearly leapt out of his frock. He ordered an immediate halt to the construction. A big argument broke out. And it was a tough argument to win for the enraged Father, because he was going up against the governor himself. But it wasn’t easy for the governor either, as he was going up against a highly respected leader of the Catholic Church.

Finally a compromise was reached. The new mission would go forward, which pleased the governor. And all other missions would remain open, including the missions in San Francisco and San Rafael. And that pleased Father Sarria.

But the Catholic establishment never got over it. They were still fuckin’ pissed. Bad feelings lingered, and the other missions did not give this new mission much support.

The interior of the mission church is the most simple and basic we’ve seen. By the way, the children at the front of the church are not missionary Indians. They were on a field trip from a nearby school. Poor kids. Imagine the disappointment of getting out of school, only to have to go to church.

Mission Sonoma was established about 46 miles southeast from Fort Ross. And it was effective for the governor’s purpose, because after all, Californians these days do not speak Russian. On the other hand, we have been accused of being communists, so I’m really not sure if the governor succeeded.

It was far enough from San Francisco Bay that the climate was warm and sunny. And it was quickly discovered that vineyards did well at this mission. And Father Altimira had no problem attracting Native Americans to help out. Like typical Californians, they knew how to appreciate a mild climate.

But what they didn’t appreciate was Father Altimira himself, who was not so mild. He exacted cruel punishments, and treated the natives harshly. He was a real prick. Conditions got so bad that in 1826, the natives grew restless and revolted. They looted and burned the buildings and supplies, and sent Father Altimira running for his life.

Now this outcast needed a new place to work. But he’d already burned all his bridges with the church, so none of the other missions would take him in. And so the cruel son-of-a-bitch had to return to Spain, never to bother Native Americans, or his fellow missionaries, again.

Father Buenaventura Fortuni, from Mission San Jose, took over the helm. He was a kind and loving man, and was able to regain the confidence of the natives. They soon rebuilt the mission and made it a prosperous success. At its peak, it encompassed 10,000 acres of vineyards, other crops, sheep, and cattle.

The altar at the front of the church contains a pornographic image of a partially disrobed man. I wonder if he’s a priest?

In 1834, all of the California missions were secularized. The stated goal of secularization was to distribute the mission lands to the Native Americans who had worked so hard to make them successful. Yeah, right. That goal was good for PR, but in practice most of the missions were confiscated by rich and powerful Mexicans, and the natives were left to fend for themselves.

Some of that happened at Mission Sonoma. In 1834, General Mariano Vallejo took the lands of this mission for himself, and made them part of his huge rancho. It was a raunchy thing to do, but at least he promised the natives protection, provided room and board, and put them to work on his raunchy rancho.

The general built an imposing home very close to the mission church, and named it La Casa Grande. And he was blessed by the Lord’s bounty, as he scavenged the roof tiles from the church, to use for his home.

Without a roof, the adobe chapel quickly deteriorated, then collapsed from neglect. But Vallejo wasn’t the only vulturine builder. Other settlers descended upon the site, and scavenged supplies from the remaining buildings. Thus, by the 1880s, the entire mission had been picked apart, and had fallen into ruins.

In 1903, the California Landmarks League purchased the ruins of the original adobe mission. They used state funds to restore the chapel, and in 1926 they sold it to William Randolph Hearst. He then generously deeded it over to the state. Sounds sort of like a tax write-off scheme, to me.

Now it’s known as the Sonoma Mission State Historic Park, and is one of three missions that are part of California’s state park system.

The museum is the long building to the right, which adjoins the mission at the far end. It costs three bucks per adult, to get in and gawk at all the goods. It’s two bucks per child, aged 6-17. And it’s free for those wee little ones who don’t give a damn.

At this museum you can also learn about the Bear Flag Revolt. It happened here in 1846, and led to California’s independence from Mexico. Which is another reason why Mission Sonoma was the mission to end all missions. It was here that Spanish and Mexican expansion came to an end, in North America, and they had to pack up and move south.

I’ll be boring you with some posts about the Bear Flag Revolt, soon.

Monument to the Bear Flag Revolt, that launched California’s independence movement from Mexico. Stay tuned for a series of posts, where I will tear down this overglorified monument, and give this revolt a reality check.