This restoration of the original Mission San Rafael Arcangel church was constructed in 1949.

The most obliterated of all California’s historic missions is Mission San Rafael Arcangel. It was established in 1817 as a medical asistencia, or sub-mission, of Mission Dolores in San Francisco. It achieved full mission status in 1822. And it’s located across the Golden Gate, about 15 miles north of Mission Dolores, in a sunnier, drier, and healthier climate.

It’s named after the archangel Saint Raphael, who is venerated by Roman Catholics as an angel responsible for miraculous healing.

Saint Raphael, the Archangel. Often associated with the unnamed angel in the Gospel of John 5:4, who stirs the water at the healing pool of Bethesda. Raphael is also mentioned in the Book of Tobit, from the Catholic scriptures. And besides the Catholic religion, Raphael is venerated by the Eastern Orthodox, Anglican, and Lutheran faiths.

Mission San Rafael Arcangel was California’s first sanitarium. The warmer climate at this mission helped the Native Americans at Mission Dolores recover from European diseases, such as measles. As word spread of its success, other missions also began sending their sick to this sanitarium.

Father Vicente Francisco de Sarria established the mission. He was very dedicated and benevolent toward the welfare of the natives, especially their physical health. And he knew his stuff when it came to medicine. He’s credited with the first original contribution by a resident of California in the field of medicine, for an 1830 paper on the use of the caesarian section as a method of childbirth.

But Father Sarria was fighting an uphill battle. The new Mexican government was determined to secularize all the California missions. And in 1833, Mission San Rafael became one of the first missions to fall into secular hands.

Mission San Rafael keeps odd hours, and was closed when my wife and I arrived. We were unable to enter the large, restored church and take photos, so I did what any non-God-fearing atheist would do, and ripped this photo off from Wikipedia.

It briefly came back to life in June, 1846, when Captain John C. Fremont occupied the mission during California’s Bear Flag Revolt.

On June 28, 1846, an event began here that would affect the course of American history. Fremont ordered his scout, Kit Carson, and two others, to kill three prominent Californios who were passing through San Rafael.

This triple-murder was used against Fremont when he ran as the Republican party’s first nominee for president, in 1856. It helped turned public sentiment against him, and he lost the election to James Buchanan.

In 1861, the old mission church was razed, and a new church was built beside the ruins of the old church. Unfortunately, no one had ever sketched or painted the old church, so to this day nobody knows how it looked. All that was left of the original mission was one lone pear tree. For this reason, San Rafael is considered the most obliterated of all the California missions.

The building to the right is the parish church that was built in 1861, beside the demolished ruins of the original church.

Nonetheless, in 1949, the old church was rebuilt. It was restored on the site of the original hospital, by Monsignor Thomas Kennedy. Kennedy had to rely mainly upon his imagination for the design, because of course, he had never seen the original. 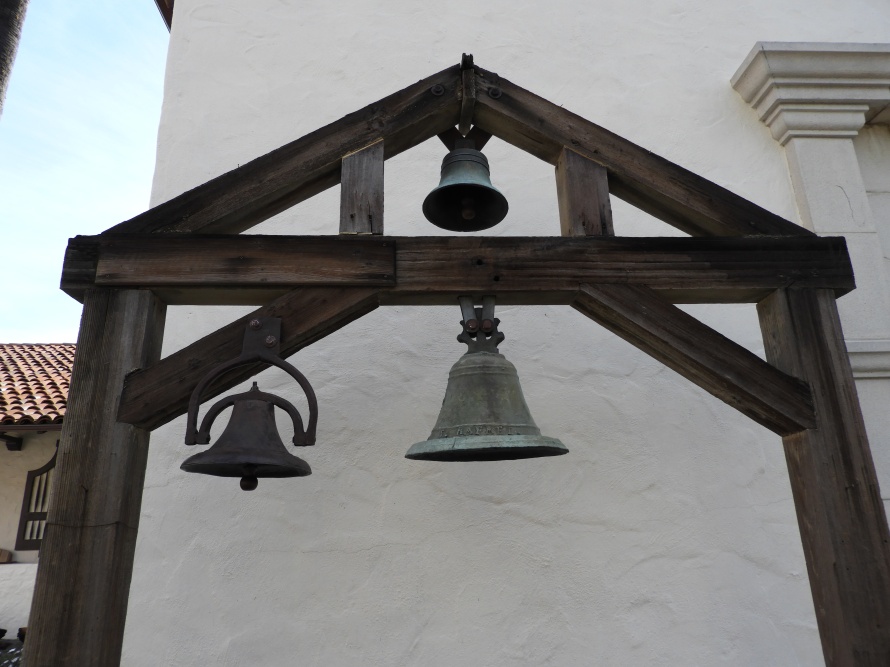 These three ding-a-lings hang out in front of the parish church that was built in 1861.

The parish church built in 1861 remains beside the 1949 restoration.

Mission San Rafael Arcangel keeps unpredictable hours. If you want to visit, take my advise and call ahead to see if it will be open. We didn’t do that, and found ourselves locked out of the restored old mission church. However, the church that was built in 1861 was open, and we were able to enter and snap a few photos.

Interior of the parish church, built in 1861.

We also got some great photos of the exterior of the restored church. We loved the architecture and pink color, and enjoyed admiring this restoration from the imaginative mind of Monsignor Kennedy.

We felt impressed with the beauty and architectural design of the restored church, even if it might not resemble the original.