Note: All photos in this post were taken from the Marin Headlands of the Golden Gate National Recreation Area.

The Golden Gate is a narrow strait of whirlpools, eddies, and undertows, that will suck you under, twirl you around, and spit you out onto the teeth of sharp, wave-battered rocks. It connects the Pacific Ocean to the San Francisco Bay. It’s often used to symbolize the state of California, and I believe it’s an apt symbol.

The treacherous currents that guard the Golden Gate are symbolic of hardships newcomers tend to encounter, after being lured here by promises of sunny weather, fame, or fortune.

Fort Point is a Civil War era fort nestled beneath the southern approach to the Golden Gate Bridge. It nearly saw action in August, 1865, from the Confederate warship CSS Shenandoah. But as the ship approached, the captain learned that the war was over and broke off his planned attack. This is different from today, where many Confederates still fly the Stars and Bars, celebrate monuments to rebel Generals, and apparently haven’t heard that the Civil War is over.

It was dubbed the Golden Gate by U.S. Army Major John C. Fremont, in 1846, shortly before he usurped military control of the new California Republic. This was nearly two years before gold was discovered at Sutter’s Mill, so the name had nothing to do with the gold rush.

Fremont envisioned golden riches pouring in from the Asian empires of Japan and China, and saw this strait as “a golden gate to trade with the Orient.”

This Golden Gate was difficult to discover. Spanish explorers blithely sailed past it for two hundreds years, often anchoring in Drake’s Bay, just 30 miles north. They never imagined they were so close to the largest bay on the Pacific side of the Americas.

Shrouded in fog, and guarded by rocks and unpredictable currents, Spanish sailors had avoided the area of this golden entrance, and thus never encountered it. It was finally discovered by a land expedition, in 1769. 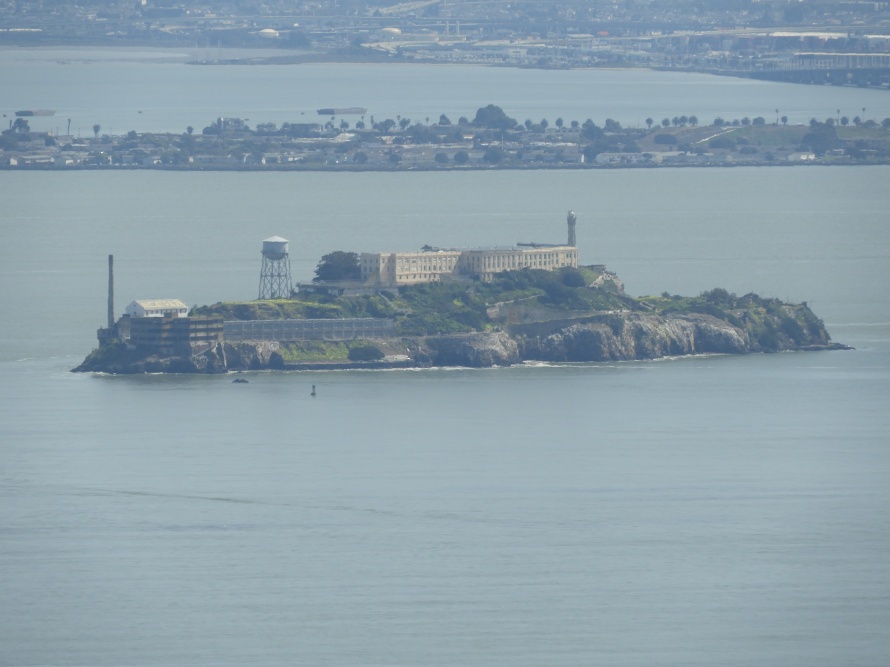 A zoom view of Alcatraz Island. Here, many newcomers to California were given a solidly built home with no chance of eviction, a steady job, and three square meals a day.

In the same way, those who dream of California are often deterred by the foggy mystery of trying to find a decent paying job, and by the dangers of high rent, long commutes, and outrageous gas prices.

I had a similar experience. I left California when I was 17, seeking fortune in easier lands. I returned five times, and struggled until I was 40, before I finally gained a solid footing in this, my home state.

The mouth of the Golden Gate, with San Francisco across the strait.

More than a hundred ships have gone down, attempting to navigate the Golden Gate and San Francisco Bay. The most common cause of shipwreck has been a loss of power that allows the strong currents to pull vessels into rocks, or onto the shallow waters of sandy beaches. If you come to California, be sure to bring plenty of reserve power with you, lest our treacherous economy beach you on the shores of financial ruin.

This zoom view of the rocks, waves, and currents at the mouth of the Golden Gate shows the strait’s treacherous navigation conditions.

California has always been deluge and drought, boom and bust, growth and wildfires. Be warned. If you wish to migrate to this hyped-up “paradise”, exercise caution. Test the wind. Trim your sails. Then stand by close to a lifeboat before daring passage through the Golden Gate.

The Gatlin Brothers can tell you a little bit more about All The Gold In California: