A Nice Place to Visit

I couldn’t blog last week. They don’t let you blog inside a correctional institution. And besides, you can’t get an internet connection in prison. 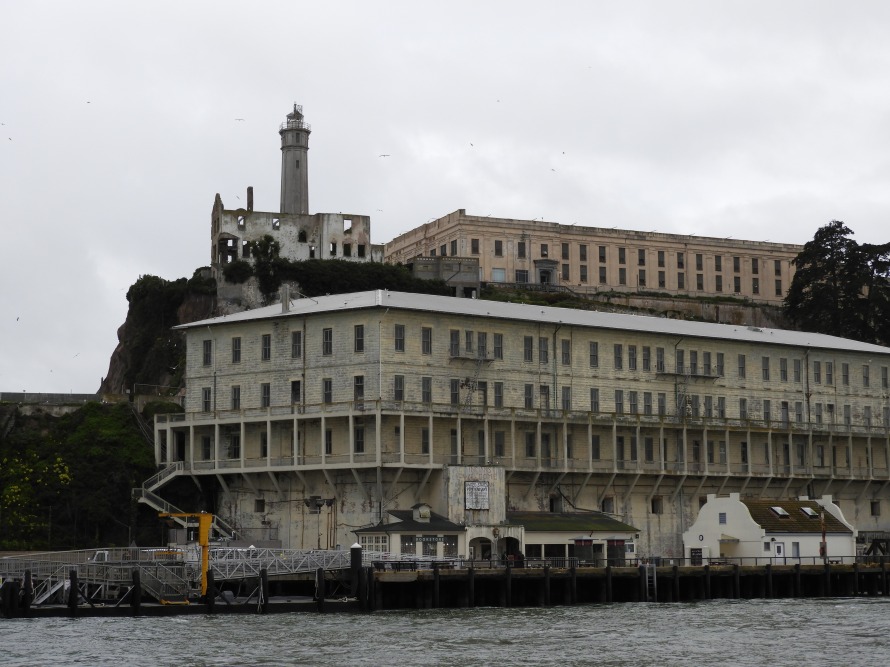 What prisoners saw, shortly before docking at their new home. The large building at dock level is the barracks that housed the guards. There was one guard for every three prisoners at this supermax facility. The cellhouse is at the top of the hill, with the warden’s house to the left, near the lighthouse.

My wife and I went to San Francisco, and toured the Alcatraz Federal Penitentiary. This prison was closed in 1963, by Attorney General Robert F. Kennedy. It was taken over by the National Park Service in 1972 and reopened, this time for tourism. Today, about 5,600 tourists visit Alcatraz Island every day, making it the most popular landmark in the United States, and the seventh-most popular landmark in the world. It just beats out the Christ the Redeemer statue in Rio de Janeiro.

We inmates, er, tourists, stood out on the dock in a cold, San Francisco wind, to be briefed by the warden, er, park ranger, on how to conduct ourselves during our stay.

Alcatraz has a lot of history. It began as a military prison in the 1850’s, then was converted to civilian inmates in 1933. It has housed the baddest of the bad, including Al Capone, Whitey Bulger, and Clint Eastwood. Clint Eastwood escaped from Alcatraz in 1962, which embarrassed the hell out of RFK, and so that’s why he shut it down. Or so I think I learned from a movie, way back when. 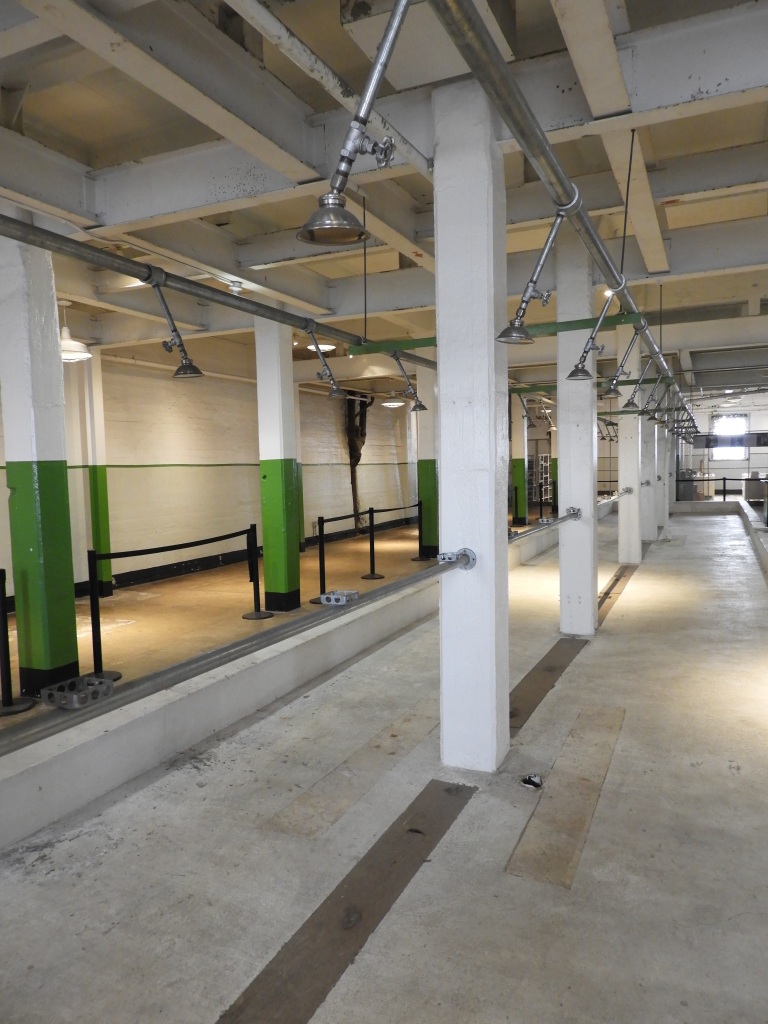 Here, we all had to strip down and take a shower, after receiving the one-fingered wave.

But in my view the most famous inmate was #1259. These days he’s referred to as William G. Baker, and he’s one of the only two former inmates of Alcatraz still alive. Baker wrote a fantastic book about his time there, as a guest of the federal government, which I recently had the pleasure to peruse. Maybe I’ll write a review, after I get caught up on all the crap I came home to after getting out of the hoosegow.

Typical 9’ X 5’ cells. Alcatraz inmates never had cellmates, so they got to enjoy their palatial 45 square feet all to themselves.

The idea behind leaving this early was to beat all the crowds. Well, the boat was jam-packed with sardines, er, inmates, er, tourists, who debouched and populated the island in such massive, invasive numbers that the idea of “beating the crowd” was laughable. We should have known, though. I mean, there have been many campaigns that have addressed this issue, but so far no one has been able to solve the problem of prison overcrowding.

A long, sloped, switchback walkway takes you from the dock, up 13 stories, to the cellhouse on the hill. My wife couldn’t handle such an incline, due to her arthritis acting up in the cold, damp, San Francisco weather, so we rode a free tram that’s provided for weaklings such as us. 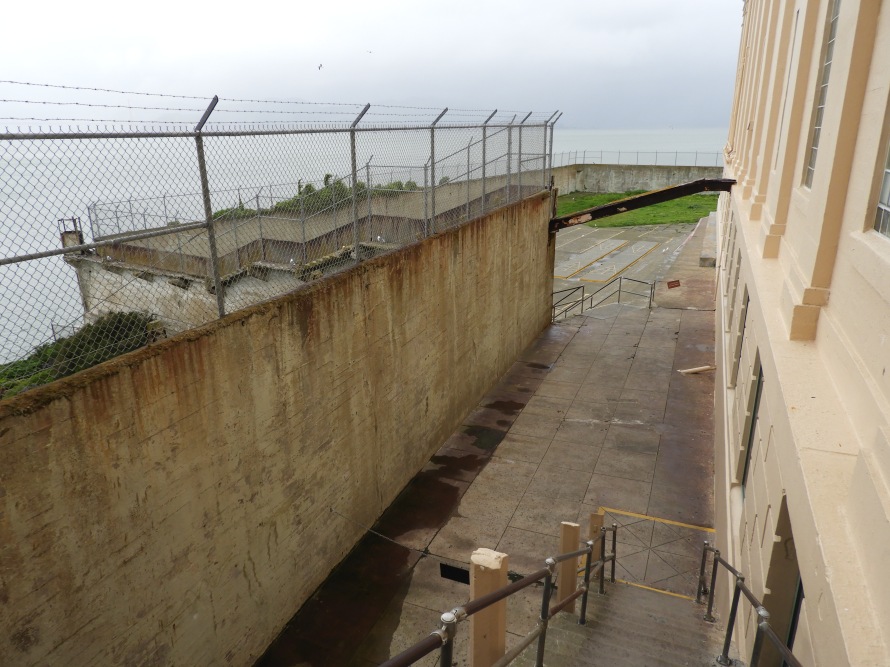 The prison yard. Prisoners were allowed outside to use this yard on weekends and holidays only. Unless it rained, which occurs fairly often in San Francisco.

The tour is an audio tour. Intake occurs at the cellhouse, where each new inmate, er, tourist, is processed. You are fitted with a control box on a loop that they hang around your neck. Until dead. But if you survive this, you put on headphones that are attached to the control box. Then you hit the play button on the box and hear the voice of someone who I guess is the warden. He orders you about, telling you where to walk, where to stop and stand, what to look at, and all the while filling you in on the history of this joint.

My wife and I failed to hit our play buttons simultaneously. So she and I were out of sync for awhile, she going in one direction, and me going in another, while occasionally bumping into each other. Fortunately there’s a pause button, where you can shut the warden up for a little bit. And this enabled us to synchronize. 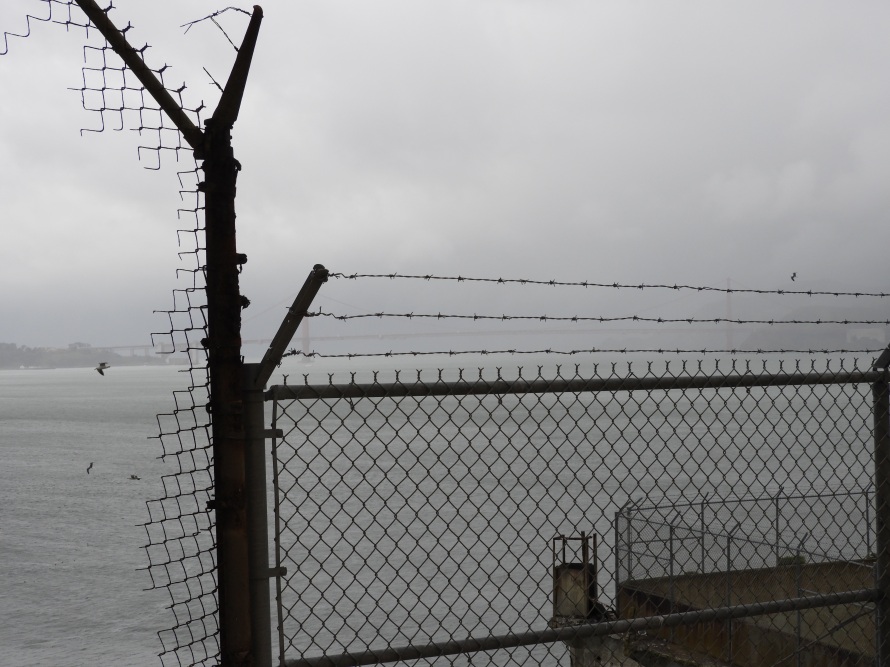 The Golden Gate Bridge, through barbed wire leading to the prison yard. The top rows of bleachers in the prison yard allowed inmates to view the Golden Gate and the San Francisco skyline. It was a popular spot for artistic inmates, who painted “freedom”, as William Baker noted in his book.

Finally I dropped a few F-bombs, to the astonishment of some fellow inmates, er, tourists, nearby. I smacked the warden in the pause button, and got out of sync with my better half. Then I methodically removed all the impedimenta from my neck, untangled the cords and straps, then returned them in an orderly fashion.

The warden’s house, now in ruins. Alcatraz Island was occupied by Native Americans from 1969 to 1971, who were protesting federal policies toward American Indians. During the occupation several structures were destroyed by fire, although nobody admitted who, exactly, set those fires.

But the tour was very informative and fun, in spite of all the formidable logistics with cords and cameras and pause and play buttons. We learned about famous Alcatraz prisoners, such as The Birdman, George “Machine Gun Kelly”, and Clint Eastwood. We learned about the Battle of Alcatraz, which was a blaze of glory escape attempt in 1946, that cost the lives of three prisoners and two guards. And we saw the very cells, with the selfsame holes, dug by Clint Eastwood and his gang, when they escaped from Alcatraz in 1962. 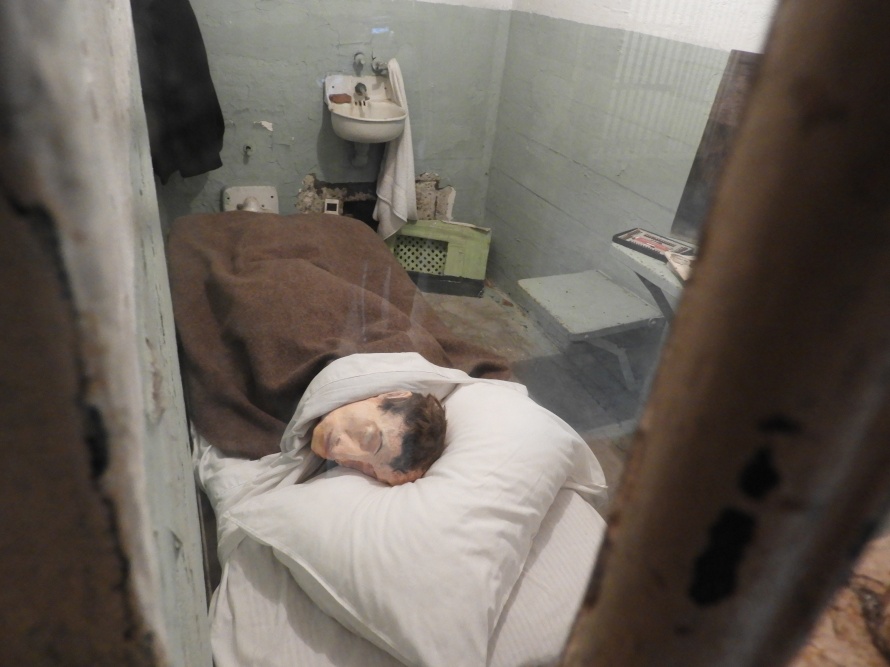 Clint Eastwood played Frank Morris, in the 1979 thriller, Escape From Alcatraz. Morris, and brothers Clarence Anglin and John Anglin, fashioned lifelike images of their heads, which fooled the guards and gave them time to escape. They passed through vent holes they had widened, climbed up pipes to the roof, made it to shore, then floated away to who-knows-where, in a makeshift raft. Several military prisoners had successfully escaped this prison, but this is the only known possibly successful escape by civilians.

Imagine if Clint had been unsuccessful. We’d still have old Rawhide reruns, but we wouldn’t have such great flicks as, Fistful of Dollars, Dirty Harry, and yes, Escape From Alcatraz.

Boats depart the island about every half hour. You can stay in prison all day, if you want, and catch the evening transit back to the mainland. But my wife and I got stir crazy. Immediately after the tour, we applied for parole. We rode the tram back down to the dock and grabbed the first departing vessel.

Alcatraz is a nice place to visit, but you wouldn’t want to live there. 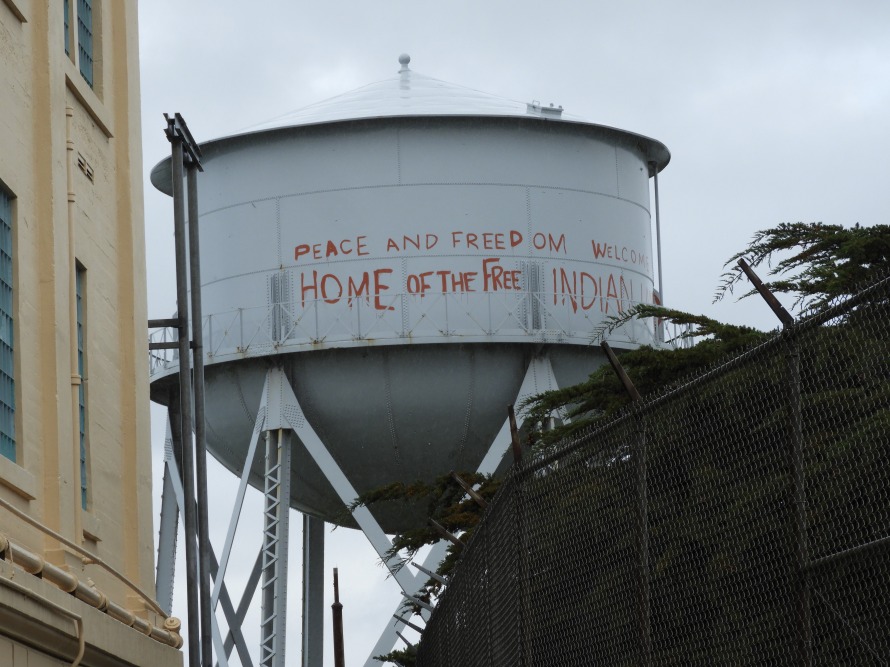 The Alcatraz water tower, with a welcoming message left over from the Native American occupation.