Mission La Purisima Concepcion was founded in 1787, near present-day Lompoc, California. It’s the only California mission that is not named after a saint. Rather, its name is a promotional for artificial insemination, the pure manner in which Jesus was conceived.

In year of grace 1800, a whistleblower named Father Horra accused the Franciscan padres of Mission La Purisima Concepcion of mistreating the natives. This set off a real pain-in-the-ass sequence of events, requiring bureaucratic paper shuffling and feigned concern. California Governor Borcia was required to investigate. He sent an inquiry to the Father of the mission, and required a written reply. 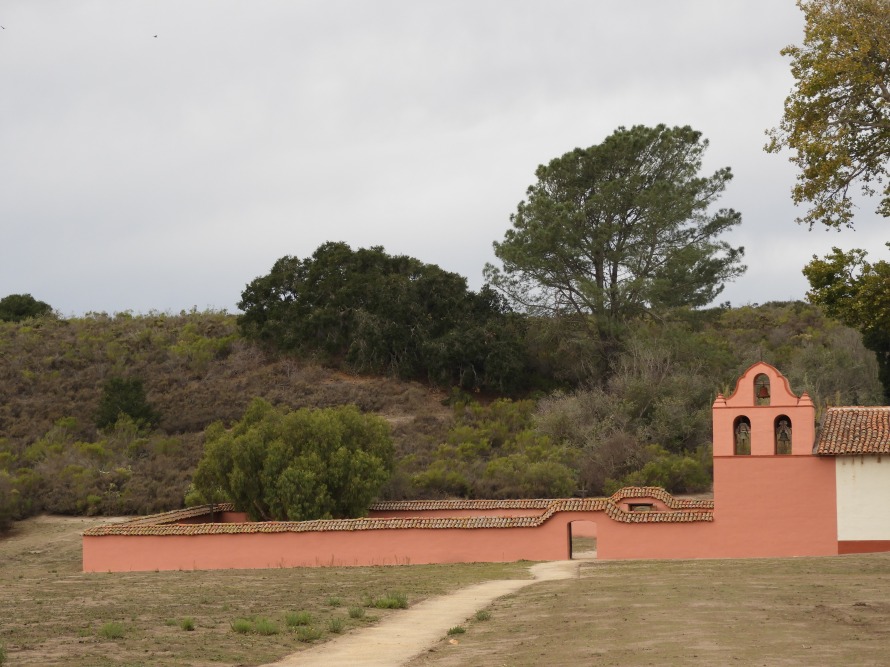 Mission La Purisima Concepcion is one of three missions owned by the State of California. The other 18 belong to the Catholic Church.

The written reply he received was historical, because it remains one of the few writings in existence that tell us about life at Mission La Purisima Concepcion.

The Father of the mission explained that the natives, whom he called neophytes, were all instructed in the principles of the Catholic religion, before being baptized. They were also taught to speak Castilian Spanish.

The State of California, and the National Park Service, has gone to great lengths to restore this mission as close to how it appeared 200 years ago, including this forerunner of the semi-tractor trailer truck.

They were fed a cornmeal dish called atole in the morning and evening, and for lunch they got pozole, which is a hominy dish, and which is almost homonymous with atole. They were allotted woolen blankets, and a set of clothing that was expected to last a full year. And they were housed in huts made of tules, similar to the kind of huts they lived in before the Spanish arrived. Yep, they lived way out there in the tules. 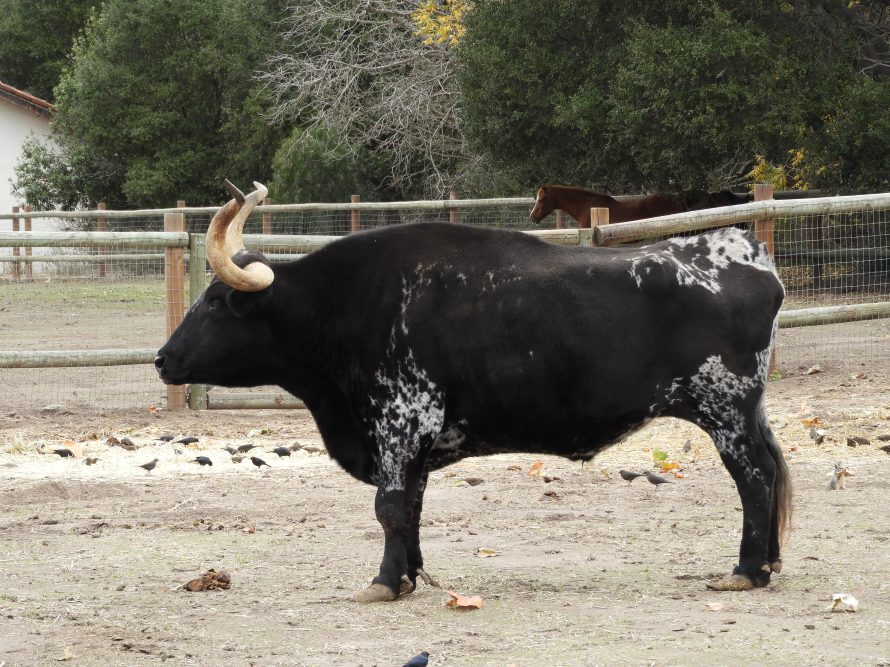 Today you can find the same farm and ranch animals at the mission that were raised by the missionaries, including this longhorn steer.

The workday of neophytes never exceeded five hours, and children, the old, the infirm, and the pregnant were all required to do at least a small amount of work. Even the fetuses were required to pitch in, even if it was just kicking a belly or tossing some water down a deep, dark chute.

Neophytes did not like working for the soldiers, because the soldiers overburdened them, or deprived them of necessities enjoyed by those at the mission. They were the real hardasses.

In 1804, the mission baptized 1,520 natives. About that same time, nearly 500 succumbed to outbreaks of smallpox and measles. I guess Jesus saveth, and Jesus taketh away.

The neophytes were punished if they left the mission furtively, especially at night. Other peccadillos the padres punished the neophytes for included concubinage and theft. Punishments for both sexes included whippings, shackles, stocks and being locked up. Crimes against the common good, such as killing cattle or sheep, or setting fire to pastures, were given to the corporal of the guard.

The main altar of the church. The mission was destroyed by a great earthquake in 1812 (along with a bunch of other missions). It was then relocated four miles away, and rebuilt. This church, and the rest of the mission buildings, were constructed with walls four-and-a-half feet thick, reinforced with stones, to withstand any future temblors.

By the way, the natives were never asked for their own opinion on how they thought they were being treated. But what could those ignorant souls know?

I assume this is the tallow candle-making shop, and not some sick adult toy factory.

But in 1824, they finally did give their opinion. After years of whippings, shackles, and stocks, the natives at three missions, including Mission La Purisima Concepcion, rose up and went to war against the missionaries. 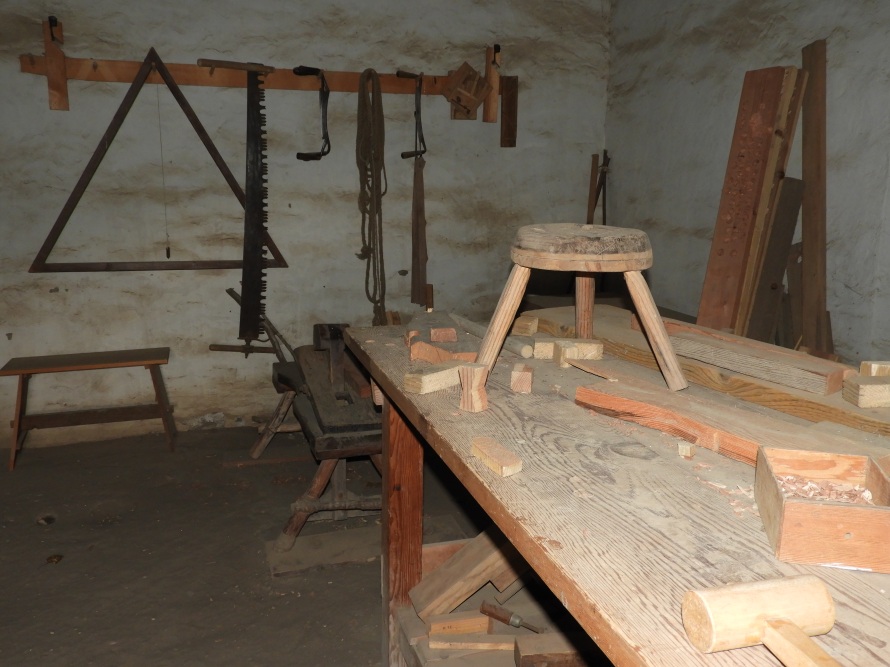 This appears to be a three-legged stool factory. After 1834, the mission was sold to some non-Mexican white dude, who let it continue to fall into ruins. Then, in 1903, he or his family, or whoever owned it after him, sold it to the Union Oil Company. The company realized the historical importance of the mission, and collaborated with the National Park Service to restore it to its original state. Just as you’d restore an old piece of furniture, I guess.

At La Purisima, a Chumash carpenter named Pacomio led the revolt. They ran off the padres, soldiers, and their families. 1,200 Chumash natives, including 400 warriors, occupied the mission compound. But after about a month of occupation, a detachment of 109 Mexican soldiers laid siege upon the mission.

As usual, the natives had no exit plan, so they decided to fight. They deployed musket fire, arrows, and a cannon, and the Mexicans matched them with the same, except the arrows. But the Mexicans were more skilled with the use of cannons. When the dust cleared, 16 natives had lost their lives, with many more wounded, while the Mexicans lost five soldiers, with many wounded.

The missionaries were good for the natives, instilling hard work as part of the warp and weft of their character.

The Chumash surrendered, marking the end of the bloodiest Native American uprising in California history. A tribunal was held by the Mexican Army, which resulted in the executions of seven of the rebels. Pacomio and three other leaders were sentenced to 10 years hard labor on a chain gang. Two of these leaders managed to escape and return to their tribe, but Pacomio and one other had to serve their sentence.

There were rules to follow at the mission, and those natives caught disobeying were really put through the mill.

But of course, these were good, wholesome lessons that were being taught to the natives, and were not mistreatment at all. And they learned their lessons well. After the rebellion, more and more of them abandoned the mission, seeking their own way with their newly smartened brains.

And with less and less natives attending to its welfare, Mission La Purisima Concepcion gradually fell into ruins.

Today it stands rebuilt, and is considered the most authentically rebuilt of all the California missions. Visitors will find atavistic tools, a blacksmith shop, a tallow candle shop, a loom with real wool, and much more. It even sports real, live farm animals of the kind raised at the mission 200 years ago.

But the one thing not present are tortured natives. Today nobody works at the mission with striped backs or hobbled ankles. Eventually someone finally heard Father Horra and all those native rebels. And their own definition of mistreatment was wisely accepted.

Today Mission La Purisima Concepcion is a State Historical Monument, and is considered to be the most completely reconstructed of the 21 California Missions.