My first sort-of girlfriend was named Barbara. She and I were in the third-grade, and she also lived just down the street from me. We laughed and played together, and had plenty of fun, until the day I called her a whore. I didn’t know what that word meant, but I thought it was funny because I’d heard other people laughing when they said that word.

Barbara didn’t think it was funny.

It would have been better had I called her a saint. Just like Mission Santa Barbara, which my wife and I visited a few weeks ago. By the way, I’ve never called my wife a whore, and we’ve had a long, happy marriage.

Mission Santa Barbara is unique in a number of distinct ways. For instance, it was the first of the old California missions to be founded by Father Fermin Lasuen, who was the successor to Father Junipero Serra.

It’s located in Santa Barbara, California, which is arguably the most beautiful coastal town in the entire Golden State.

It’s the only mission with two bell towers. Smart. It’s always wise to have a backup. Legend has it that Saint Barbara was locked up in a tower by her pagan-worshiping father, from which she miraculously escaped. So perhaps this is why two bell towers were built at this particular mission.

It’s been destroyed or severely damaged by earthquakes, twice, in 1812 and 1925.

The mission architecture is beautiful, but no place to stand near during an earthquake.

The Mexican government secularized the California missions in 1834, threatening the total loss of the mission system. But Father Presidente Narciso Duran came to the rescue. He transferred his headquarters to Mission Santa Barbara, and brought with him over 3,000 original documents that pertained to all the missions. This is the oldest archive in California, and remains a priceless treasure for historic research. And these documents have been used for the accurate restoration of the other missions, after they fell into ruins.

An old, out-of-use gateway to the Mission cemetery.

Mission Santa Barbara is the only one of the 21 California missions to remain under perpetual control of the Franciscan Order, from its founding in 1786, to the present day. The rest were sold off by the Mexican government after 1834, to Californios. 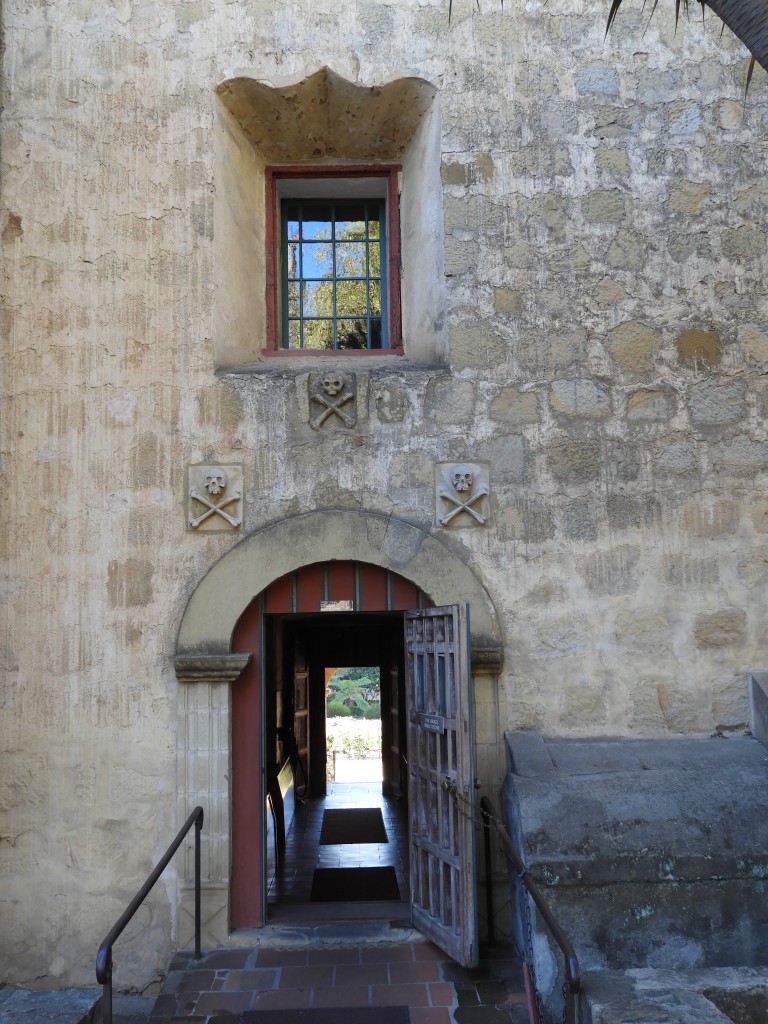 This side entrance, from the cemetery to the church, was reserved for pirates only.

Californios were the original Mexican landowners in California. They were unfortunate in several ways. First, their land was coveted by white settlers after the United States stole California from Mexico, during the Mexican War. The treaty of Guadalupe-Hidalgo guaranteed they could keep their land. However, the Californios violated this treaty when they sided with the Confederacy during the Civil War.

A basin of holy water at the main entrance to the church. Or maybe it’s God’s eyeball. I’m not sure.

Therefore, on March 18, 1865, Abraham Lincoln decided to grant a petition by a Catholic bishop, to return all the California missions back to the Catholic Church. The Californios lost out, but historical preservationists won a big victory. 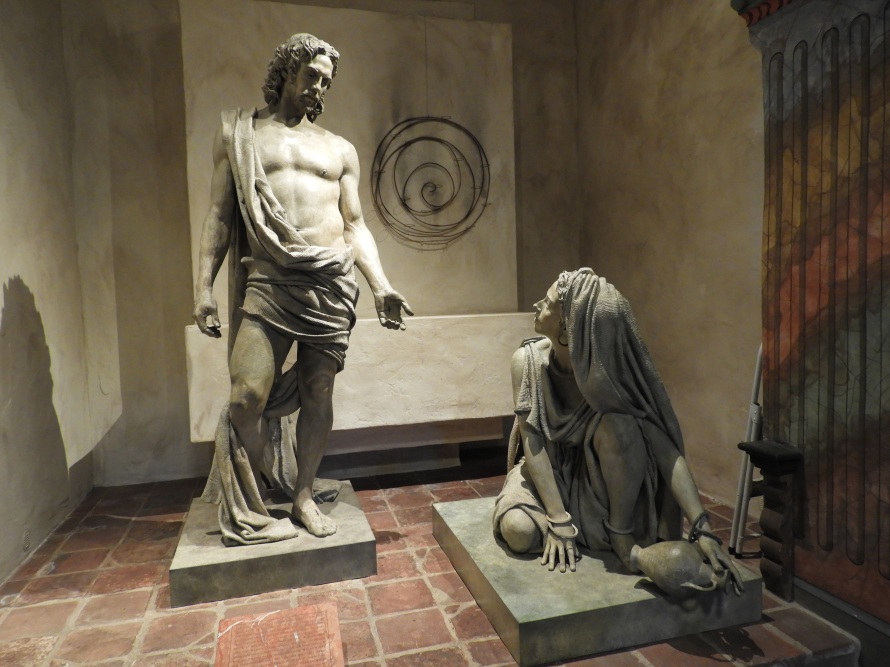 Jesus asking a woman at Jacob’s Well for a drink of water. She was a Samaritan, considered one of the lesser races of people. And she’d had five husbands already, and was shacking up with her sixth lover. I mean, for Christ’s sake, what the hell was he talking to a woman like that for?

I can’t speak for my first girlfriend, because I lost track of her after grade school. So I don’t know what line of work she eventually pursued. But history speaks favorably to Barbara, the mission. It has always been run by a religious order. And it has been very instrumental in the restoration of all the other California missions.

This little niche is so colorful and inviting, I hardly feel sorry for the “poor” box.

Mission Santa Barbara has lived up to its first name. It truly is a Saint. 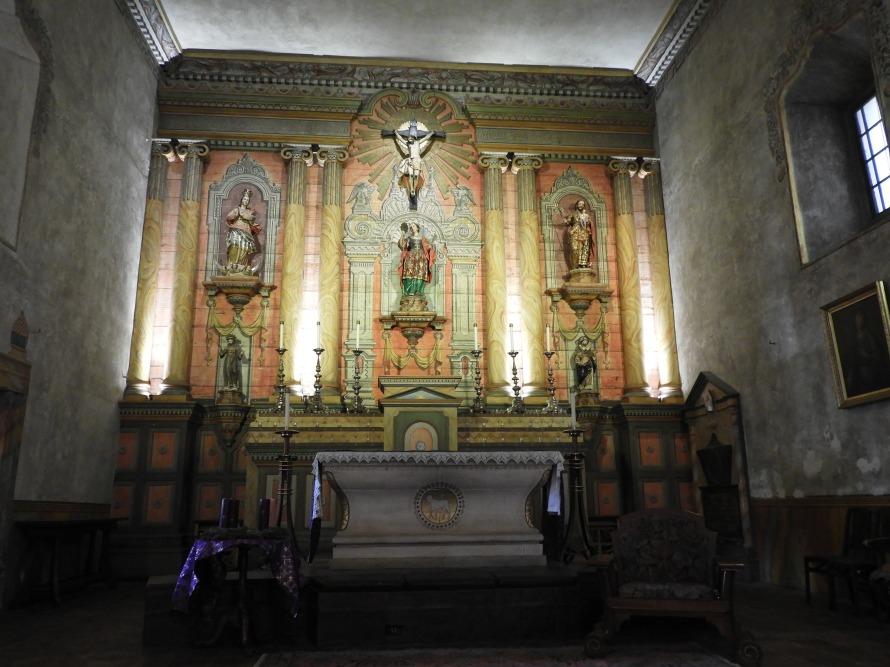 The church altar, in all its refulgent splendor.