The Life and Philosophy of Seagulls

My wife and I cannot visit the ocean without buying a loaf of day-old bread. Or box of crackers. Or bag of pretzels. We don’t buy it for ourselves. No, we prefer donuts. We buy it for the seagulls. My wife loves feeding these white-winged scavengers, and so every walk on the beach involves being mobbed by gulls, circling and diving and fighting for a free handout. 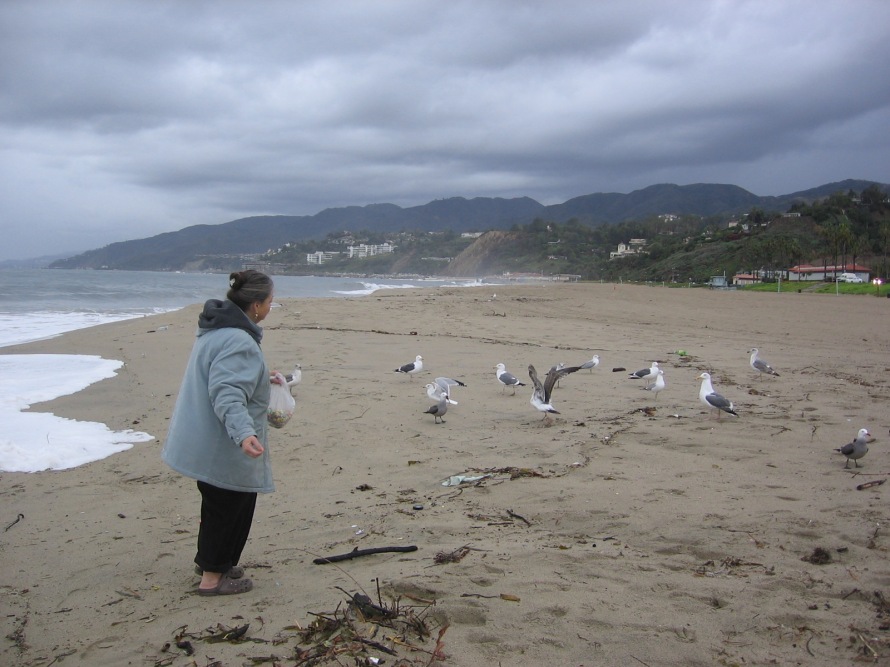 My wife feeding seagulls at Will Rogers State Beach, in Santa Monica, California. “For most gulls, it is not flying that matters, but eating. For this gull, though, it was not eating that mattered, but flight.” ~ Richard Bach, Jonathan Livingston Seagull

You have to be careful when feeding seagulls. I advise wearing a hat, and maybe a raincoat. And be quick. If you hold the food too long in your hand, a gull may fly straight into your face and snatch it away, while grabbing a finger in the process.

Some seagulls trust they won’t be grabbed by humans who offer food. And some humans trust they won’t lose their fingers while offering food. “Don’t believe what your eyes are telling you. All they show is limitation. Look with your understanding, find out what you already know, and you’ll see the way to fly.” ~ Richard Bach, Jonathan Livingston Seagull

We like seagulls, so it’s nice to know that they thrive on every continent. Most are migratory and don’t give a damn about borders. Some travel all the way from South America to Canada, and back again, without ever acquiring a visa. One time we visited the Mexican Riviera during the summer, and noticed with disappointment that there were no seagulls. Hell, they’d all flown north, enjoying the cooler climes of such resort towns as San Francisco and Seattle. 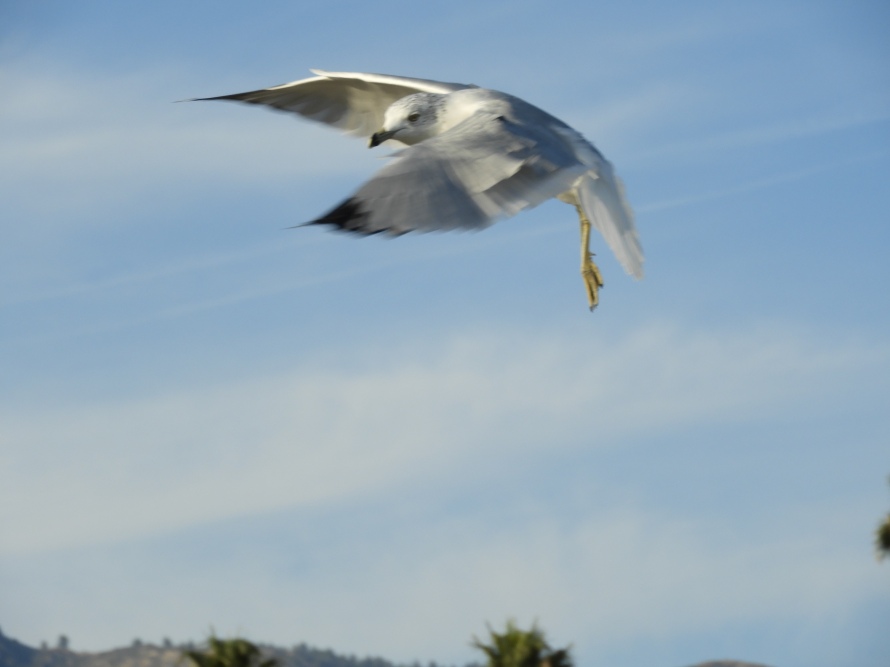 Seagulls have very smart bird brains. Their communication skills are more complex than any teenage girl’s. And they gather in colonies, where they yap and yawp and squawk at each other, while establishing an intricate social order. Kind of how committees work. They do this once per year, during their breeding and nesting season. 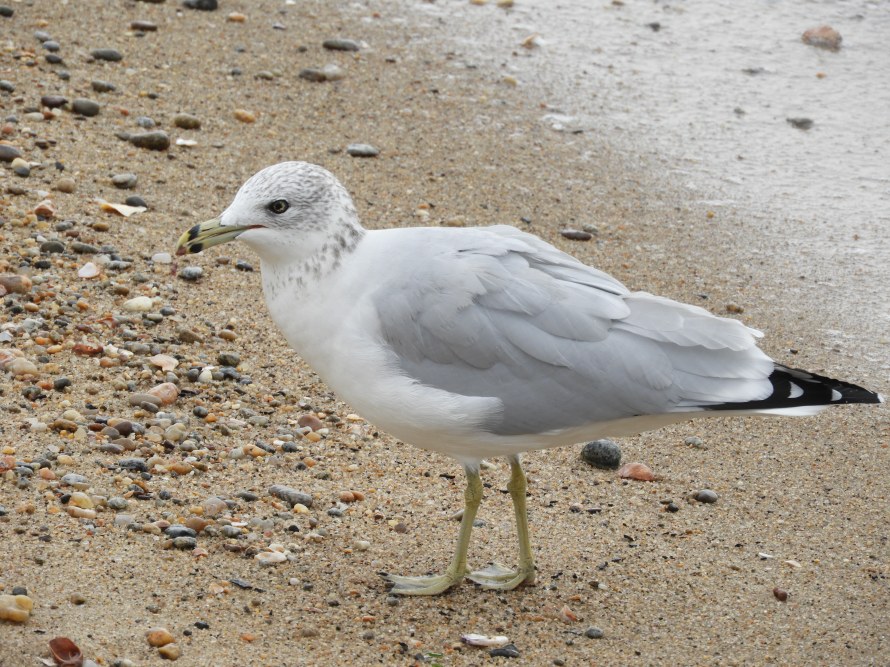 A Ring-billed Gull during a light rain, at Hammonasset Beach State Park, in Madison, Connecticut. “With the same inner control, he flew through heavy sea-fogs and climbed above them into dazzling clear skies . . . in the very times when every other gull stood on the ground, knowing nothing but mist and rain.” ~ Richard Bach, Jonathan Livingston Seagull

Marriage is a sacred institution for seagulls. They are monogamous, tying the knot for life. On rare occasions a colony will allow a couple to divorce, but afterwards those poor divorced seagulls are treated like pariahs. They aren’t even allowed inside singles bars. It’s worthy to note, by the way, that over 800 years ago, Saint Francis of Assisi converted all seagulls to Roman Catholicism.

A California Gull against the Santa Ynez mountains, at Santa Barbara, California. “His one sorrow was not solitude, it was that other gulls refused to believe the glory of flight that awaited them; they refused to open their eyes and see.” ~ Richard Bach, Jonathan Livingston Seagull

Their political form of government is Socialist. When seagulls gather together in their colonies, they are all apportioned a circular plot of land, sometimes up to 30 feet in diameter, and mortgage-free, for nest-building and raising their brood. And the whole community pitches in at child-rearing, because the parents will often receive outside help to sit on their eggs. It’s called Seagull Daycare, and is an official government program of the Democratic Seagulls Republic of Oceania. 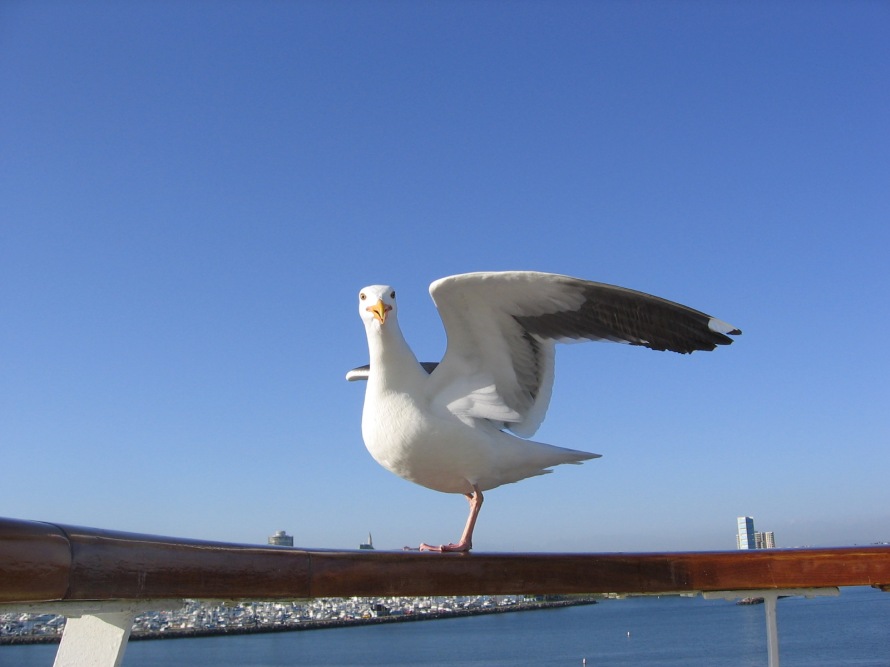 This Western Gull appears to be delivering a speech, on the taffrail of a cruise ship docked at Ensenada, Mexico. “I have no wish to be leader. I want only to share what I’ve found, to show those horizons out ahead for us all.” ~ Richard Bach, Jonathan Livingston Seagull

All seagulls are required to join the Air Force while living in their colonies. And when a predator dares to venture near, the alarm goes out, and squadrons upon squadrons of seagulls are scrambled, which dive-bomb the intruder until it dies or runs the hell away.

“Each of us is in truth an idea of the Great Gull, an unlimited idea of freedom.” ~ Richard Bach, Jonathan Livingston Seagull

Seagulling doesn’t come easy. It takes a long time to learn how to be a seagull. Seagull school is very challenging, because these birds must learn how to acquire their food in countless different ways. Here’s a list of some of the food-gathering techniques employed by gulls:

Seagulls can be omnivorous. They can learn to eat just about anything, such as these remains of a cracker box we emptied on the beach. “We choose our next world through what we learn in this one. Learn nothing, and the next world is the same as this one, all the same limitations and lead weights to overcome.” ~ Richard Bach, Jonathan Livingston Seagull

Seagulls are also one of the few birds that know how to open a clam shell. They fly it up to a great height, and then drop the clam onto rocks, or some other hard surface. What a horrifying elevator ride for the poor damn clam. This is the most difficult skill of all, for seagulls to learn, and so older gulls tend to be more successful with it than younger ones. Or maybe it’s because when the youngsters try to get the oldsters to teach them this skill, the oldsters clam up.

Hawking is the practice of snatching insects in mid-flight, from a perch, as this keen-eyed Western Gull is preparing to do. “Why is it,” Jonathan puzzled, “that the hardest thing in the world is to convince a bird that he is free, and that he can prove it for himself if he’d just spend a little time practicing?” ~ Richard Bach, Jonathan Livingston Seagull

Eating may pose a learning curve for seagulls, but drinking does not. They possess glands in their skulls that filter out salt. So that leaves the entire ocean available to them, for slaking thirst. You’ll never encounter a seagull at the beach trying to bum a drink from you.

This Ring-billed Gull at Lake Champlain, Vermont, must have been very drunk or very brave. It allowed me to approach within a few feet, to steal a closeup. “Jonathan sighed. The price of being misunderstood, he thought. They call you devil or they call you god.” ~ Richard Bach, Jonathan Livingston Seagull

There are many different species of seagulls. Which, by the way, are scientifically called “gulls”. As far as ornithologists are concerned, there’s no such thing as a “seagull”.

The “Little Gull” is, coincidentally, the smallest of the gulls. It weighs just 4.2 ounces, and is only 11 inches long. The largest gull species is the “Great Black-Backed Gull”, which weighs 3.9 pounds, and is 30 inches long. And it has a black back, in case you weren’t aware.

Now that you know all about seagulls, perhaps you may want to take a trip to the beach, where you can observe them more closely. Seagull watching can be fun, so I’m sure your trip will be worth every dollar you spend on expensive motel rooms and parking meters. But while you’re packing your swimsuit and setting your GPS, my wife would like to remind you of something. Please, don’t forget to run down to the grocery store and buy a loaf of day-old bread.

“The only true law is that which leads to freedom,” Jonathan said. “There is no other.” ~ Richard Bach, Jonathan Livingston Seagull

If you’re still not clear about the philosophy of seagulls, perhaps Neil Diamond can help you, with his soundtrack from the movie, Jonathan Livingston Seagull: