The drive up Mount Washington offers several viewpoints where you can pull over and watch clouds play peekaboo with mountaintops.

My wife and I have embraced the tourism industry, in our retirement. So in honor of this industry we decided to visit Mount Washington, in the White Mountains of New Hampshire. In 1852, Mount Washington became one of our nation’s first tourist attractions, with the construction of a stone hotel at its peak, called the Summit House.

We enjoyed this spectacular view of New England, at the top of Mount Washington, through a small break in the clouds.

This just proves how inexperienced and ignorant we Americans were back then, at vacationing and sightseeing. Mount Washington bills itself as “Home of the World’s Worst Weather.” It’s the highest peak in the Northeastern United States, at 6,288 feet. And as you may guess, it’s pretty cold and windy up there. 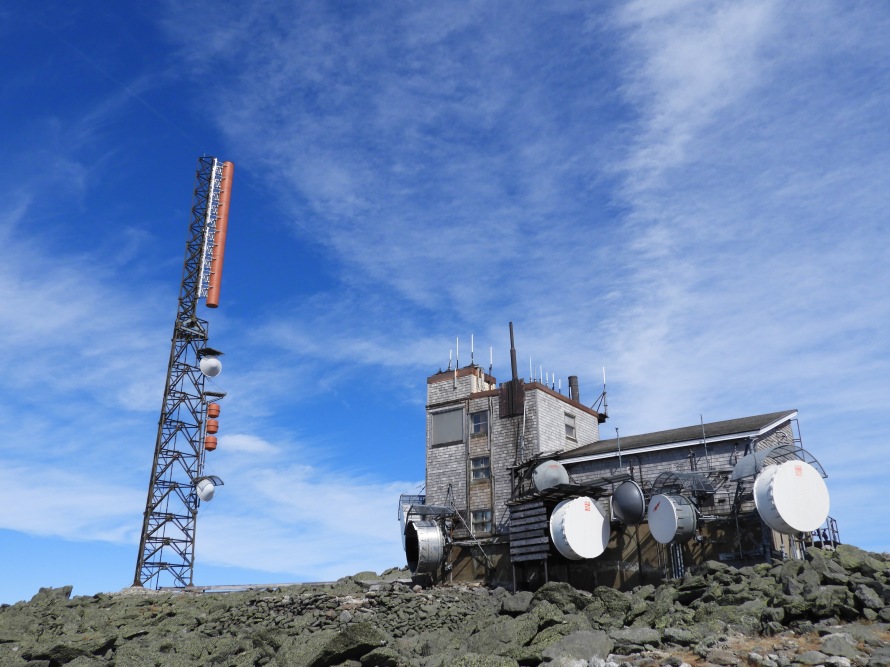 There’s a big weather station at the top of the Mount, with all kinds of large, mysterious meteorological instruments. I think the big white drums are used for alerting New Englanders of coming Nor’easters.

In 1934, the Mount Washington Observatory weather station recorded a world record surface wind speed of 234 miles per hour. Hurricane-force wind gusts occur on the summit on average of 110 days per year. It warms to 60 degrees Fahrenheit (F) or more on only 13 to 14 days of the year, with its highest recorded temperature hiccuping to just 72F. It’s official record low is -50F, occurring in 1885, but it’s lowest recorded wind chill is -102F, occurring in 2004. Mount Washington’s average daily mean temperature is just 27F, and it receives 97 inches of precipitation per year (including over 28 feet of snow).

Why in hell would any tourists want to go to this place? 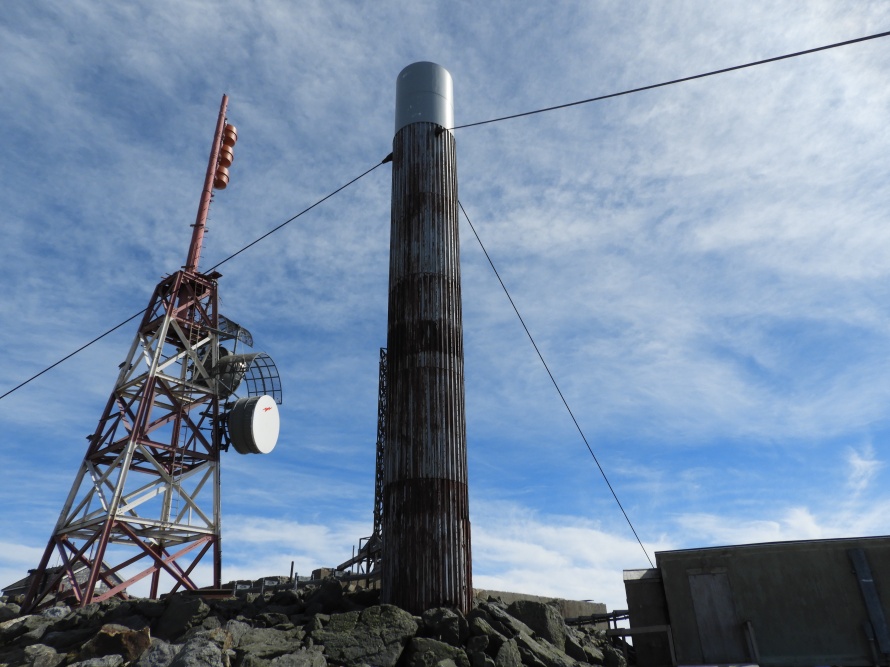 I think this tall, towering structure is used for measuring snowfall depth. Or perhaps it’s used by the resident meteorologists as an escape rocket when the weather turns super bad. 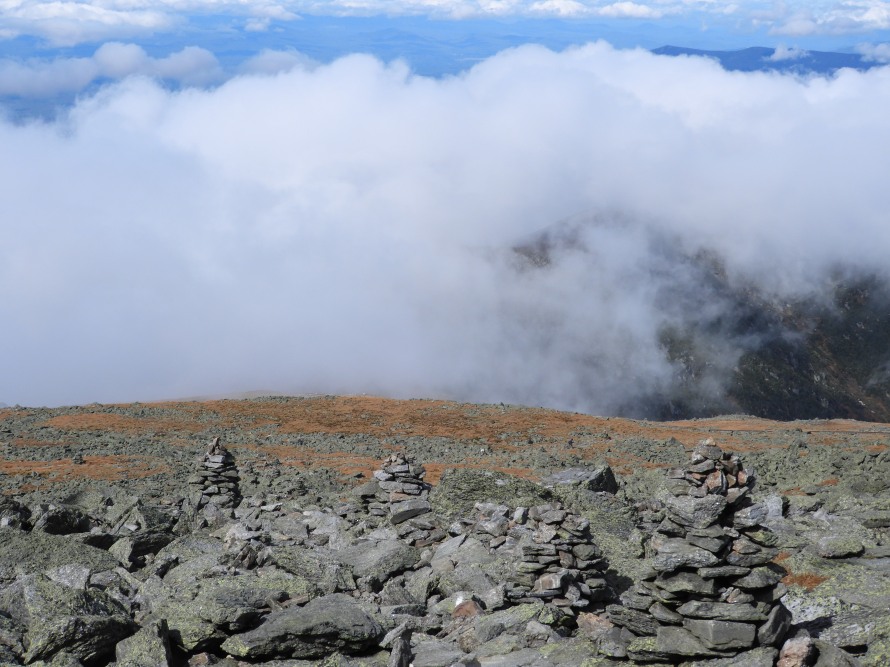 No, these stone cairns aren’t little monuments to the Great Spirit. I suspect they mark various spots where tourists have perished from exposure.

But then along came a colonist, in 1642, named Darby Field. He convinced the local tribe that the white man was not subject to their god and asked permission to climb Agiocochook. I imagine they looked at each other astonished, then shrugged their shoulders and said, “Tourists. Go figure.”

They gave permission and Darby Field successfully ascended this peak. And he managed to keep from being transformed into a block of ice by the Great Spirit. But for the next 200 years it was largely left alone by the wise inhabitants of New England. 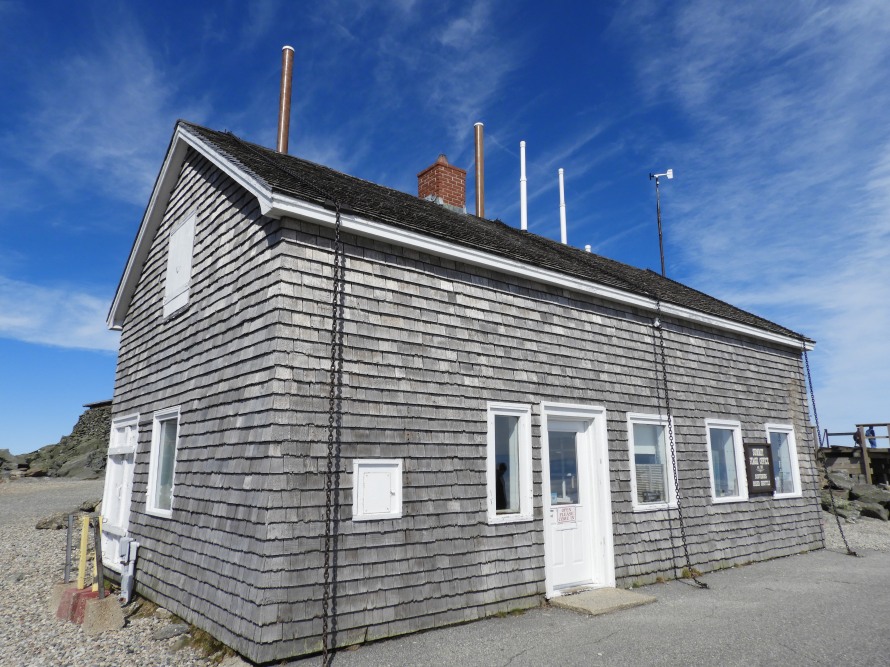 This building on Mount Washington has been secured with chains, to prevent it from blowing away.

And then someone got the bright idea that they could attract tourists.

The Summit House came first, in 1852, and then two years later the Tip-Top House was built as competition. And tourists from thousands of miles away flocked to these facilities, not knowing, I guess, that more comfortable destinations could be had at places like Florida, California, or Hawaii.

The Tip-Top House, built in 1854. Instead of being secured with chains, this old hotel has been anchored in place with granite boulders.

Entrepreneurs must have realized that if tourists could be attracted to a freezing hell such as Mount Washington, then why not to anywhere else? And thus America’s tourism industry took off and boomed. 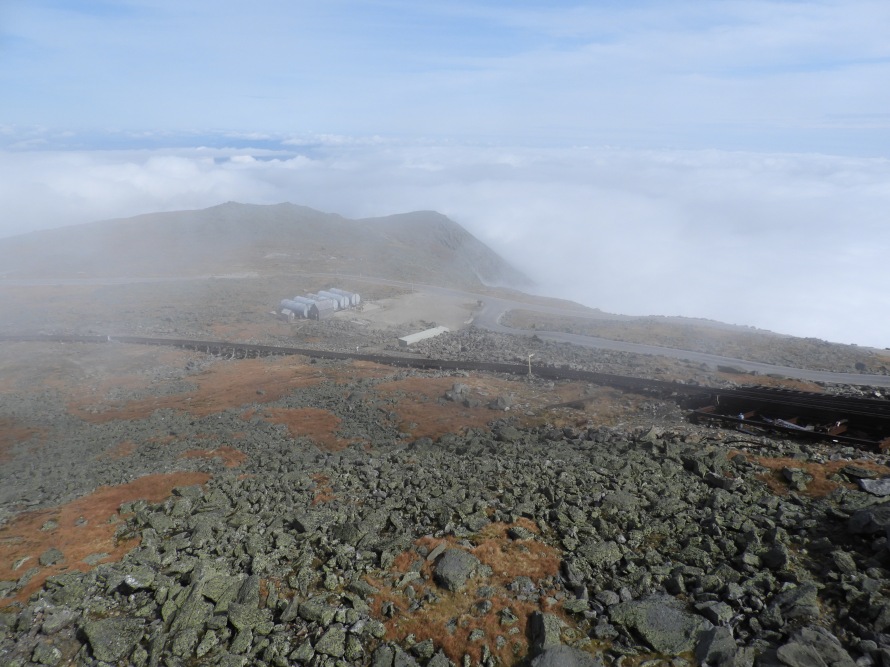 A cog railroad was built in 1869, for tourists who felt sorry for any horses that might have to travel to this harsh environment. It is still in operation today.

My wife and I were the latest in a long string of idiots to tour Mount Washington. It’s a privately owned attraction. It cost $40 to enter, and required about 20 minutes of hair-raising driving time to reach the summit.

We spent about an hour or so at the top, admiring the views and touring the old buildings, including the Tip-Top House. Fortunately, the temperature was a mild 48F and the Great Spirit was only blowing about 30 mph. Beautiful weather for September. 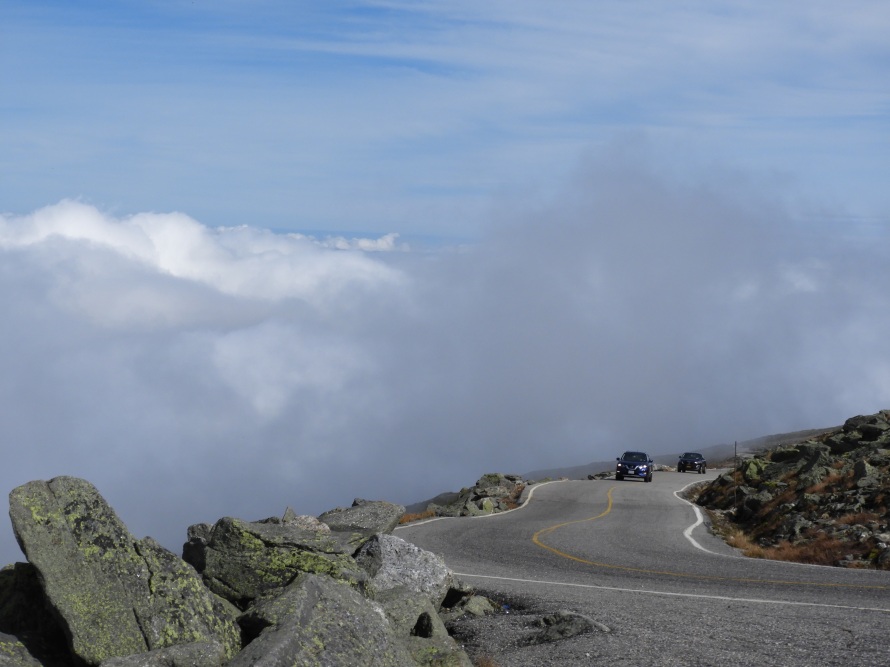 There are no guardrails on the road to the top. This is actually a safety feature, as it gives motorists an incentive to drive slowly and carefully.

The descent was more frightening than the ascent, as evidenced by the dent my wife put in the floorboard, with her foot. When we reached the bottom I stopped and opened the window, and caught the whiff of smoldering brake pads. We parked the car and waited a few minutes for the wheels to cool off, and then it was off to saner, more intelligent tourist destinations in the north of New England.

By the way, if this post has inspired you to visit Agiocochook, this weekend’s forecast calls for highs in the 30s, with the Great Spirit blowing from the Northwest at 70 mph, a wind chill below zero, and an 80% chance of snow.