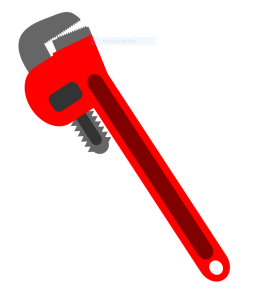 You can do anything with one of these.

Most home repair jobs can be handled without hiring professional help. All it requires is a certain attitude. First you have to believe in your ability to accomplish a somewhat complex task. You must also be willing to risk making a problem worse rather than better, because that will occasionally happen. Though it’s rare. And you must maintain a level head, so that you can assess the repair situation, and any contingencies that may arise, in a logical, common sense manner.

For example, our bathroom had a minor plumbing issue. Water would leak out the faucet handles of the shower whenever the faucets were opened. No big deal, but after a while I got tired of it and decided to fix this problem.

I logically and correctly assessed that the compression washers and valve seats in the faucet valve stems required replacement. Pretty easy job. And I’d done this before, so I knew how to fix it.

I started with the hot water side, on the left. I got the old faucet seat out with a bit of a yank (it was in there pretty tight). Then I put the pipe dope on the new one, and confidently inserted it into the pipe head and turned the nifty little seat wrench I had just purchased from Home Depot.

But it wouldn’t thread into place. I tried and tried for about 15 minutes, but I just couldn’t seem to get it onto the pipe threads in the exact proper position, so that it would start to screw in.

It’s a must to remain level-headed and logical in these situations. So I attempted to keep my cool while assessing the situation.

The shower wall on the left, and the cold water faucet handle on the right were complicating things, because they were getting in the way of my seat wrench, forcing me to go about a third of a turn, then pull the seat wrench out, reposition it, and put it back in.

This short turning radius was frustrating. But after I calmed down and my hands stopped trembling, I decided I’d have to pull the cold water faucet out, so that I could get close to a full 360 degree revolving bite on the seat wrench, and get that dilly of a faucet seat threaded into place.

But the screw on the faucet handle was frozen. I struggled with it, while a few feelings of apoplexy kind of popped through my skull. Finally, after several cerebral hemorrages, I stripped the head of the fucking screw. So then I had to spend the next goddamned hour drilling the asshole screw out, and ruining the friggin’ valve stem in the process.

But after much drilling and swearing I finally got the muther-fucking stubborn, shithead, ass-wad valve stem out, and at last had a nearly full circular muther-fucking swing available for installing the goddamned, muther-ass, stupid, pissy-assed-bastard hot water side faucet seat.

I stormed away. Stomped into my bedroom. Closed (slammed) the door. Slapped my head a bunch of times. Called every plumber who ever invented plumbing a dumb-assed mother-fucking son-of-a-bitch.

But after a bit I finally calmed down. And then an idea occurred to me. What would happen if I tried turning the seat wrench clockwise, rather than counter-clockwise?

So I gave that little ingenious trick a try.

And so you see, I can handle home repair jobs. I don’t need professional help.