My wife and I took a trip to the Richard M. Nixon Presidential Library and Museum. Or as I like to call it, Dick’s Place.

My wife has an interest in Dick. Her grandmother was a friend of his mother. They were next-door neighbors who visited over the fence and talked about their hobby. Which was, raising exotic roses. And which no doubt involved some one upsmanship. This was when the Nixons lived in Whittier, California.

Impressed? I thought not. Okay, enough with the name-dropping. But maybe I can impress you with some research. As part of our visit to this academic oasis, I did a little research on our ex-prez. Here’s the real story on the rise and fall of Dick:

Our 37th President was actually born in Yorba Linda, California, and this is where his library is located. The Nixons had a citrus ranch and raised lemons. But they were squeezed out of business when Dick was nine. His family moved to Whittier, where they bought a gas station and small grocery store. They took Dick with them.

I suppose this is how Dick learned how to turn lemons into lemonade. His beginnings were humble and hardscrabble. His family struggled. When Dick was 14 his older brother fell ill with tuberculosis, leaving him to step up to the plate and assist with the family business. He worked hard to help out, and no doubt learned a few of the dirty tricks for survival that all struggling people must learn.

While touring Dick’s Place, I turned down a shadowy hallway and got lost. Suddenly I happened upon a ghostly apparition of our former president, napping on a chaise lounge while pretending to work. He startled me, and my reaction startled him awake. He explained that as one gets older, one has a right to take naps more and more often, to make up for all the hard work they did when young. I heartily concurred and found my opinion of this man doing a complete about-face. Dick’s ghost won me over in that precious moment.

Dick was no dickhead. He was sharp as the juice of pure lemon and got good grades in school. He impressed his rich grandmother, who fortunately died and left him a bequest to attend Whittier College. That served as a stepping stone to a full scholarship to Duke University School of Law.

Dick graduated Duke in 1937 and tried to get a job with the FBI. But he couldn’t pass the fortune-telling test, which predicted he would one day get into serious trouble with the federal law. So he had to settle for a position with a legal firm, as a practicing attorney.

A full-sized replica of the Oval Office, as it appeared when Dick was lodged in it. This is the selfsame desk that Dick used during his five-and-a-half years in office. LBJ allowed Kennedy’s famous Resolute desk to go on a traveling exhibition, and then be put on display at the Smithsonian. Jimmy Carter brought it back in 1977. This irresolution about the placement of the Resolute desk left Dick with the need to scavenge a replacement from another room in the White House.

World War II found Dick bored, flaccid, and craving action. He joined the Navy as a Lieutenant Junior Grade, and was soon immersed in the South Pacific Theater, heroically preparing manifests and flight plans, and supervising the loading and unloading of cargo from aircraft. He nearly received a Purple Heart from several paper cuts incurred on an especially busy day.

In 1946 a committee of frustrated Republicans wanted someone who could defeat incumbent Democratic Congressman Jerry Voorhis. One of the committee members knew Dick. Dick rose to the occasion and thoroughly fucked Voorhis, by painting him as a communist. Red-baiting was one of the first dirty tricks up Nixon’s sleeve, and it got him elected.

In 1948 Dick pulled out another of his dirty tricks by taking advantage of a crazy California election rule. He ran for, and won the DEMOCRATIC congressional primary. Under this crazy rule he also ran, and of course won the Republican primary. This allowed this incumbent to run unopposed for reelection. “None of the above” was not on the ballot, so naturally he won the general.

In 1950 Dick ran against Helen Gahagan Douglas for the U.S. Senate. He again relied upon red-baiting, and described her as “pink, right down to her underwear.” She riposted by calling him “Tricky Dick.” This epithet stuck with Nixon for the rest of his political career. But sadly, she and her pink panties lost anyway, and Tricky Dick became a Senator.

In 1952 a smoke-filled room of Republican bigwigs selected Dick as the running mate for presidential candidate Dwight D. Eisenhower. They liked him for all his hard work fighting dangerous suspected communists, while on the House Unamerican Activities Committee. Plus they thought he could help carry California.

Soon a huge scandal blew up, where Dick was accused of accepting bribes in the form of a slush fund from his supporters. Pressure mounted for him to resign from the campaign. But on September 23rd, 1952, Dick gave his famous televised Checkers speech, and won widespread sympathy and popularity.

In this speech he proclaimed that he would not resign, because he was “no quitter”. And he lamented that he was just a man of modest means, and that the only gift from his supporters that he had accepted was a pet cocker spaniel that his daughter named “Checkers”.

Why it brought the populace to tears, and everyone suddenly loved Dick and liked Ike. They beat Adlai Stevenson and easily won reelection against the same Adlai in 1956. But then Dick’s long string of victories was torpedoed by a former PT boat commander.

Dick Nixon ran for President in 1960 and lost to John F. Kennedy by 84 votes. Electoral votes, that is. I won’t tell you the popular vote margin, because that doesn’t count in America.

In 1962 Dick ran against Pat Brown (Jerry Brown’s father) for governor of California. He was trounced, and after the election he announced his retirement from politics. He quipped that we wouldn’t have his dick to kick around anymore, or something in that vein.

Turns out, Dick really was a quitter.

But not for long. Good fortune once again smiled on this lemon picker from Yorba Linda, in the form of the Vietnam War, and the assassinations of John and Robert Kennedy. Dick rose again, and stood for election in 1968. He beat Hubert Humphrey by 110 votes and became President of the United States. 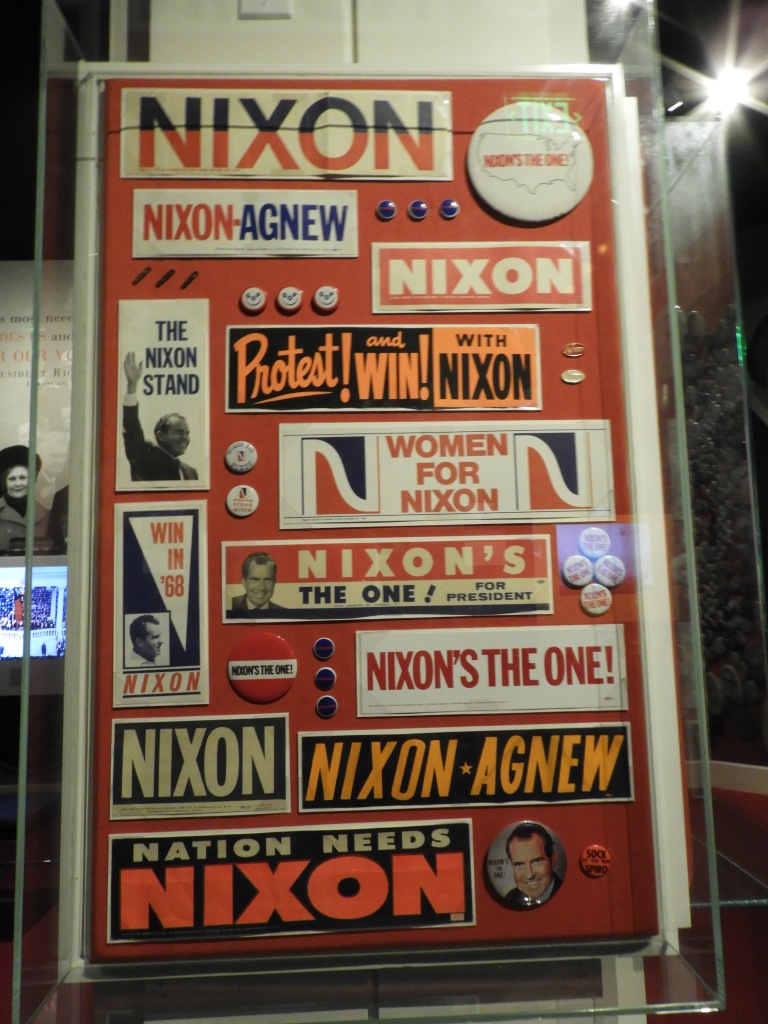 Bumper stickers from Dick’s presidential campaign of 1968. I wonder what happened to the “Honk If You Love Dick” sticker?

Dick ran under the promise of getting us out of the Vietnam War. Which he did, four years and 21,000 American lives later. He accomplished many other things also, and could have been considered one of America’s greatest Presidents–if it only hadn’t been for that other thing he did.

A short-timer’s combat helmet, in the Vietnam War. Apparently this soldier loved Vietnam so much he was counting the days until he could go home and tell his friends all about it. Photo of a photo from Picturing Nam: U.S. Military Photography of the Vietnam War, an exhibit organized by the National Archives and Records Administration, currently on display at Dick’s Place from 9/2/17 – 1/7/18.

He was the last progressive Republican president. Under today’s standards I think he’d be a screaming liberal. Here are some of the things we can thank our Dick for: 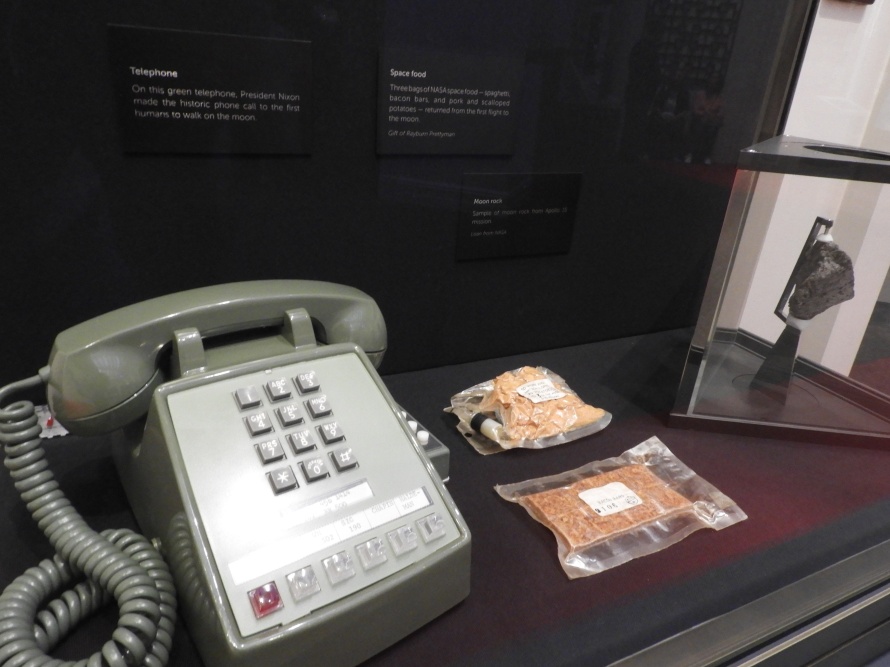 This is the actual phone Dick used when he called Neil Armstrong and Buzz Aldrin, who at the time were taking a stroll on the moon. That’s space food in the middle, and a moon rock on the right. 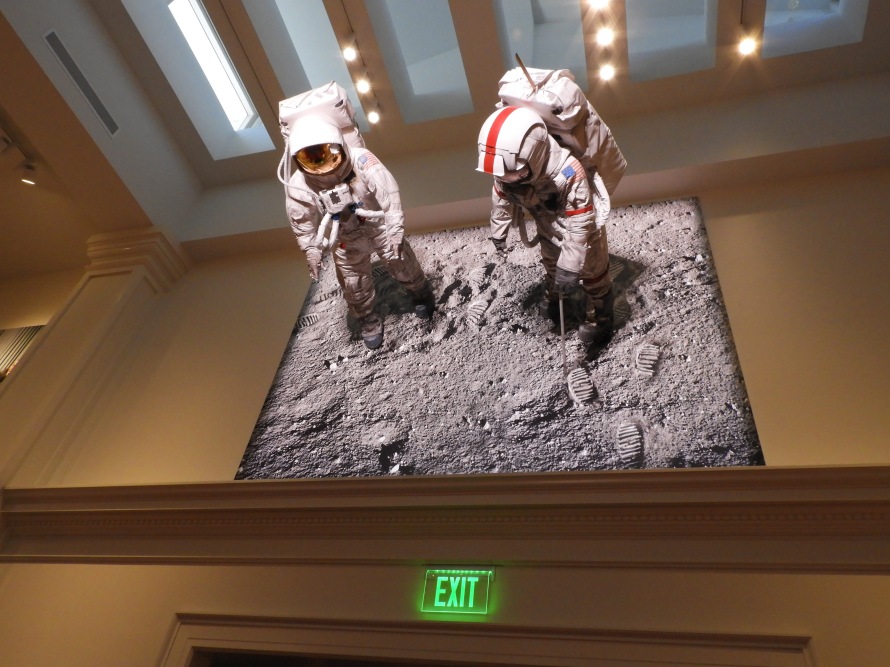 On the left is the actual spacesuit used by Neil Armstrong when he walked on the moon for the first time. Depicted here, Neil and Buzz are on the verge of a great discovery when suddenly their phone rang.

So he was a man of many accomplishments, even when beset by scandal in his office.

In 1972 he won reelection by defeating George McGovern by 503 votes. But in that same year he used one of his dirty tricks to burglarize the Democratic Party’s headquarters at the Watergate Hotel. This was the dirty trick that broke Dick.

He spectacularly accomplished reelection, but spectacularly lost popular and political support. On August 8, 1974, Tricky Dick quit again, by resigning from the presidency.

Marine One. Dick flew a total of 125 times in this helicopter. This includes his final trip from the south lawn of the White House, where he famously waved goodbye from the door after resigning, while millions of Americans famously flipped birdies at their television sets.

He went from hero to zero in the last 18 months of his presidency, and transmogrified into the most reviled personage of our country. Everybody hated Dick. That was the popular thing to do.

These masks became popular on Halloween after Dick resigned. To this day they sell well every October, for reasons that confound all Halloween mask experts.

But in the 1980s and 90s Tricky Dick rehabilitated his image. He served as an ad hoc advisor and diplomat to Presidents Reagan, Bush, and Clinton. By 1986, a Gallup poll ranked Dick as one of the ten most admired men in the world. Suddenly, everybody loved Dick again.

On April 22, 1994, Dick Nixon died from a stroke. He was buried beside his wife, Patricia, at his presidential library in Yorba Linda, California. Dick’s Place. 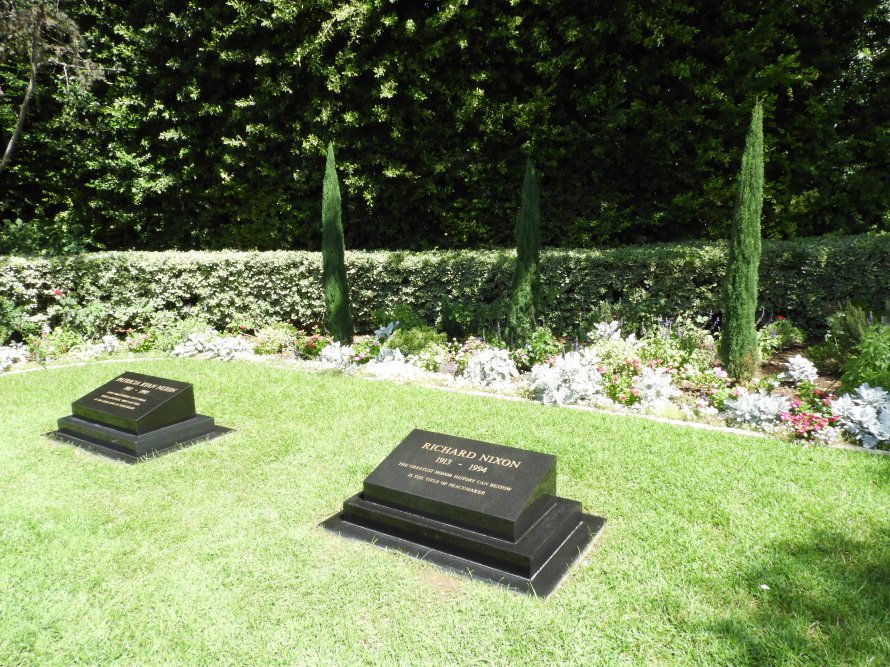 Pat and Dick enjoyed a lifelong romance. Dick felt devastated after she passed away and he followed her, with his broken heart, ten months later. Strange presidential trivia: She was ten months older than him, so their lifespans were almost identical in length, with Dick living only five days longer.

Whatever you think of Dick now, don’t forget that we are all a basket of contradictions. There was much good in the man, in spite of the deplorable.

We can take comfort from his humble origins, in knowing that anyone in America is capable of great success. You don’t have to be the child of a millionaire tycoon.

We can also take comfort from his downfall. We see that when someone in America abuses their authority, and cheats, lies, and covers up, they can be held accountable, no matter how rich or powerful they are. (Okay, somewhat accountable. After all, he was pardoned.)

Let’s hope we continue taking comfort in knowing these things. 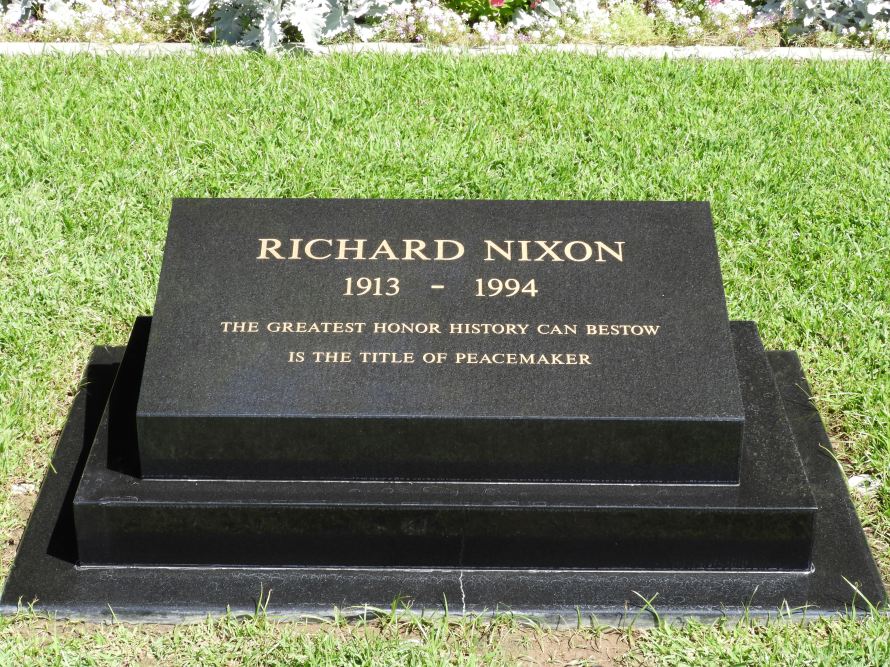