The Death and Burial of Cactus Ed

Cactus Ed vomited blood, then sat at his typewriter in Fort Llatikcuf. Fort Llatikcuf (to be read backwards) was the name he gave his home in southern Arizona. Cactus Ed knew he was dying, and wished to express his wishes for his final arrangements.

As a farewell message to all the people who loved and hated him, he typed, “No comments.”

Cactus Ed had authored several bestselling books during his lifetime. These books were very influential, and helped in the passage of laws for preservation of our wilderness lands. The next time you get distracted by the scenery and step off a cliff while hiking in some heart-stopping, untouched landscape, say a silent “thank you” to Cactus Ed.

Southern Utah was Cactus Ed’s favorite spot on earth. He fought hard to protect broken-up wildlands like this, found in the Grand Staircase-Escalante National Monument, Utah.

Cactus Ed was a controversial figure. He wasn’t just a man of words. He believed in direct action. His books promoted civil disobedience, and he was the original standard-bearer for the radical environmental movement. His work inspired the birth of anarchist environmental organizations such as Earth First! In fact, he was revered by Earth Firsters and often spoke at early gatherings of this organization.

His failing fingers managed to type that he wanted his body transported in the bed of a pickup truck.

Did you ever take a college course in literature? If so you may have been assigned to read the book, Desert Solitaire. The literary world considers it a classic of the American West. It’s Cactus Ed’s autobiography about several summers he spent as a seasonal ranger at Arches National Monument (now a national park), in Utah.

In many ways, Cactus Ed fought a losing war, as evidenced by this overlay of civilization (high voltage power lines), against orange sandstone formations in Grand Staircase-Escalante National Monument, Utah.

Continuing with his dying instructions, he requested that he be buried as soon as possible, with no undertakers, and “no embalming, for Godsake.”

Before Desert Solitaire, Cactus Ed had written a novel entitled The Brave Cowboy. In 1962 it became the movie Lonely Are the Brave, starring Kirk Douglas and Walter Matthau, with screenplay by Dalton Trumbo (who had been blacklisted by Hollywood in the 1940s and 50s, for being a communist). Kirk Douglas played Jack Burns, a roaming ranch hand who refused to join modern society and who rejected such things as driver’s licenses and draft cards.

Cactus Ed didn’t like draft cards. He was a World War II vet who got a college education in the late-1940s, funded by the G.I. Bill. In 1947 he publicly urged fellow students to rid themselves of their draft cards. That prompted the FBI to put him on their watch list. They kept him there the rest of his life. Many years later Cactus Ed learned about being on this watch list and commented, “I’d be insulted if they weren’t watching me.” 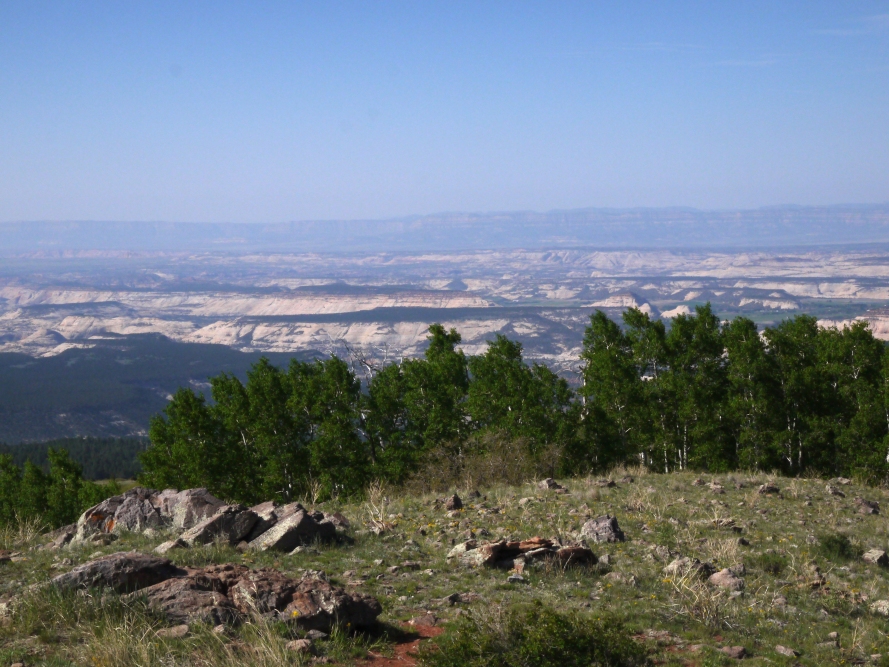 Capitol Reef National Park, from the mountains of Dixie National Forest. One could easily stumble off a cliff while enjoying this view. Thank you for such dangers, Cactus Ed!

He typed away. He requested that he have no coffin, just an old sleeping bag, and that all state laws should be disregarded concerning his burial. In his words, “I want my body to help fertilize the growth of a cactus or cliff rose or sagebrush or tree.”

In spite of Desert Solitaire, The Brave Cowboy, or the TV movie Fire On the Mountain, after his novel of the same name, he is best known by environmental activists for his novels, The Monkey Wrench Gang and Hayduke Lives!

These novels read like bibles and manuals for anarchists. They are fictional non-fictionals, because they are based upon true events. The true events were the ecotage, or ecology-motivated sabotage, surreptitiously committed by Cactus Ed and a band of his close friends.

Cactus Ed hated billboards. And he despised heavy earth-moving equipment, especially the bulldozer, that rips, tears, and levels the earth, allowing for the “progress” of “civilization” into wilderness areas.

He and his merry band of saboteurs stalked the desert night with monkey wrenches and a variety of other tools. They sawed billboards down, poured sugar into the gas tanks of bulldozers, and dismantled parts off of any and all earth-moving equipment they could find. On one occasion they discovered ignition keys foolishly left inside a huge bulldozer. They started that dozer up, put it in gear, and pointed it toward the nearest steep cliff. It crashed and burned 500 feet below.

It was a cliff like this that saw the demise of that monstrous bulldozer.

The old war veteran typed a little more with his dying fingers. He prescribed his funeral. He wanted gunfire and a little music. He stipulated, “No formal speeches desired, though the deceased will not interfere if someone feels the urge. But keep it all simple and brief.”

After that he wanted a big happy raucous wake. He wanted more music, including bagpipes, and it all should be gay and lively. He asked for “a flood of beer and booze! Lots of singing, dancing, talking, hollering, laughing, and lovemaking.” He also wanted meat, beans, chilis, and corn on the cob to be served.

He had suffered for a long time from esophageal varices, which are veins deep in the throat that can bleed easily. They are caused by cirrhosis of the liver. A few days earlier he had undergone surgery for these varices, but Cactus Ed sensed the operation was unsuccessful. He was right.

Just ten days before he left this world, on March 4, 1989, all was going well. Cactus Ed had entertained a gathering of fans by reading to them passages from the first draft of his book, Hayduke Lives!, a sequel to The Monkey Wrench Gang.

About a week later he had the surgery, and on March 14, 1989, Cactus Ed bled to death from his throat.

He died at Fort Llatikcuf among family and friends. Before the rigors of mortis set in, these friends dutifully wrapped his corpse in a sleeping bag and loaded it into the back of a pickup truck. They drove him into the Cabeza Prieta desert, to one of Cactus Ed’s favorite secret spots. They buried him there, in an unmarked grave. The only hint they’ve given as to the exact location of this tomb are the words, “you’ll never find it.”

But his friends say they did carve a marker on a nearby stone that reads:

Later that month about 200 of Cactus Ed’s friends gathered near Saguaro National Monument near Tucson, Arizona, and held the wake he requested. A second, much larger wake was held in May of that year, just outside his beloved Arches National Park, and several notables spoke at that wake.

Cactus Ed left behind a wife, several ex-wives, and five children from different marriages. And as for the afterlife, he left us this message from his book, Desert Solitaire:

“If my decomposing carcass helps nourish the roots of a juniper tree or the wings of a vulture – that is immortality enough for me. And as much as anyone deserves.”