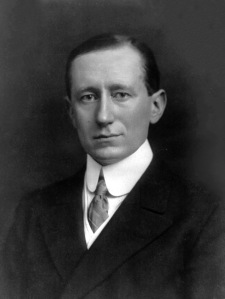 Guglielmo Macaroni, 1874-1937. I don’t have any pictures of my macaroni and cheese dish, so you’ll have to settle for a photo of the inventor of this dish. Guglielmo Macaroni was not just a chef, but also a scientist. He invented wireless radio transmission, which revolutionized the way we communicate.

Dr. Victo Dolore, at the blog “Behind The White Coat” asked me to write a post on macaroni and cheese. I don’t like cooking-themed blogs, and tend to avoid them. Who wants to read a boring old recipe? Not me.

But I’ve learned that it’s always best to follow a doctor’s orders. So at the risk of turning this into a cooking blog, here is my recipe for macaroni and cheese. This recipe should feed a family of three gluttons for about two days:

Well, it’s actually three recipes in one. So let’s start with the first. First you have to make bechamel sauce (pronounced BAY-shum-el). Bechamel sauce is a standard sauce used in many different dishes, so this is a handy recipe to have.

Step 1: Grab a large, white onion. Yank it out of your garden, steal it from a produce stand, or pilfer it at the grocery store. You need an onion.

Step 2: Reach into your pocket and dig out your pocketknife. Slice about a quarter of that onion out of the bulb, then toss the rest in the fridge for something you might make later. Such as hot dogs.

Step 3: Make an onion piquet. Piquet is French for puke. But never mind that. Just make an onion piquet. Don’t know how? Here’s how: Get into your spice rack and look for the cloves. Not the damned powdered cloves, but the whole ones. They look like little pins. Get just one little clove; you don’t need more. Then find a bay leaf. Those are the things that look like little leaves. Put the bay leaf over the onion, then stab it with the clove, so that the clove clings the bay leaf to the onion. This is brutal, violent stuff. Be careful not to poke yourself in the process.

Step 4: Throw the onion piquet into a heavy saucepan. Then pour in 36 ounces of milk. That’s 4.5 cups. Light a big fire under the saucepan, then wait. When that milk starts a’boilin’ turn the fire down until the milk is just a’simmerin’. A simmer is a kind of light boil. It’s when you see little bubbles coming up, but not great big bursting, roiling bubbles. Now simmer that damned onion piquet in the milk for a whole 20 minutes. Stir it a lot, because nothing sticks worse to the side of a pan than cooked milk.

Step 5: In a separate pot, make a white roux out of flour and butter. What the hell is a roux, you ask? Beats the shit out of me. I can’t speak French. Just follow this recipe: Slice off 2.2 ounces of butter from that cube in the fridge. And you do use real butter don’t you? You sure as hell better, or this won’t taste so good. Use an electronic food scale to measure out this butter. I don’t like using measuring cups much. Scales are a lot more precise. Toss the butter into a saucepan. Now weigh out 2.2 ounces of flour, and throw that into the saucepan. Light a medium-sized flame under the pan. Grab yourself a spoon, or fork, or some sort of stirring implement, and stir the crap out of this concoction, until the butter is melted and a thick paste has formed. Then take it off the flame before the white roux gets too hot and then turns into a blond roux or a brown roux. But if it does, don’t worry. It should still work out well.

Step 6: After 20 minutes, remove the onion piquet from the milk, and throw it in the slop bucket for the pigs. You’ll probably find that the damned clove has come loose, and the bay leaf is floating around in there. If you want, fish the clove and bay leaf out. Or just leave them in, and amuse yourself watching someone’s reaction when they find a leaf in their macaroni. And a loose clove looks a bit like a booger, and that can educe even more amusing reactions.

Step 7: Put a flame under the white roux you made in Step 5, then gradually add the hot milk to it, while stirring constantly with a whisk to avoid lumps. Nobody likes lumps in their macaroni. Bring this concoction up to a good boil. Then reduce to a simmer, and simmer for 30 minutes. Stir a lot because, you know, cooked milk just loves the sides of pans. Whilst it’s simmering, add salt, pepper, and nutmeg, to taste. “To taste” means just that. Imagine what the finished dish will taste like, as you’re sprinkling these ingredients into the milk. And make sure you have a conservative imagination, or you might overdo it and everyone will throw up at the dinner table.

Step 8: After 30 minutes of simmering, you’re done. Congratulations! You’ve just made bechamel sauce. But now it’s time to convert your bechamel sauce into a bechamel cheese sauce, with the following recipe:

Step 1: Add to the bechamel sauce, 2.2 ounces of grated cheddar or American cheese. Then add a dash of Worcestershire sauce, and a teaspoon of dry mustard.

Step 2: You should have added these ingredients a few minutes before your bechamel sauce was completed. Surprise! I hope you read these instructions completely, first, before embarking on making this gourmet macaroni and cheese dish. So let’s say you did, and you wisely added the ingredients in a timely manner. The cheese should all be melted by now, and so by now you have yourself a fine batch of bechamel cheese sauce. Now let’s move on to the main recipe:

Step 1: Do you like to make your own pasta? Then go find a book and learn how. I’m not teaching it here.

Step 2: Get down to the dry goods store and buy or steal yourself some already-made macaroni noodles. It comes dry, in a box or plastic bag. Check the ingredients out. If you want the best stuff, get the macaroni that’s made from semolina flour.

Step 3: This recipe calls for 16 ounces of dry macaroni. The rule, when it comes to boiling pasta, is to use one gallon of water for every pound of pasta. Therefore, find yourself a big enough pot to hold one gallon of water. Get that water up to a rolling boil. Toss some salt into the water. Pasta absorbs salt only when it’s being boiled, so that’s the time to salt it. Unless you have high blood pressure that’s caused by salt. Then don’t salt it. I don’t like much salt myself. Really, you can do without the salt. Now once the water is a’boilin’, grab a handful of macaroni and just toss it in. Make sure your handful contains exactly 16 ounces of this curly pasta. Use the scale.

Step 4: Boil the 16 ounces of macaroni until al dente, or tender. Al dente is a fancy Italian word that means slightly firm. How do you know it’s al dente, or tender? You have to fish around in the water with a spoon, and snag a boiling piece of macaroni on the fly. Then bite into it. That’s the only way to tell if pasta is done. You must bite it. However, it should only take about 7 or 8 minutes of boiling to make it nice and done and tender. Slightly less time for al dente.

Step 5: Strain the cooked macaroni through a china cap or colander. A china cap is a large conical contraption with holes in it, and it works just like a colander. It seems like a racist term that perpetuates a Chinese stereotype. But this term persists in the field of the culinary arts, where apparently, nobody gets out of the kitchen long enough to be enlightened by our modern world. After straining, run some cold tapwater over the noodles to cool them down. You have to cool them down or the damn stuff will just keep cooking, even when there’s no fire under it. Then pour the macaroni back into that big old pot you boiled it in.

Step 6: Throw the bechamel cheese sauce into the pot of cooked macaroni noodles and stir like hell for a while, until every noodle is coated with the sauce.

Step 7: Dump 16 ounces of grated Cheddar or American cheese into this mixture of sauce and noodles. By the way, you have been keeping yourself busy grating all this damned cheese, while the bechamel sauce was cooking, haven’t you? It’s a lot of grating. It will wear your arms out. You will feel exhausted by now. But you can’t rest. Because now you have to mix all this cheese into the macaroni. Use a great big spoon that you can wrap both forearms around, and stir by swaying your body in a large, swirling motion.

Step 8: Grab a big slice of that fattening, heart-attack-inducing, real butter you keep stored in the fridge, and use it to butter the bottom and sides of a large casserole pan. Meanwhile, preheat your oven to 350 degrees.

Step 9: Pour the macaroni, sauce, and cheese mixture into the casserole pan. It should pour out in one or two big oozing glumps. Careful, don’t let any tumble over the pan and onto the floor, or you’ll have to scoop it up and put it into the pan with your bare hands, while no one is looking. Smooth out the top of the mac and cheese so that you have an even surface.

Step 10: Slice off some more of that life-ending butter and put it into a saucepan. Throw four ounces of bread crumbs after it, turn up the heat, and stir this around. By the way, you can get the bread crumbs in a can, at the store. DO NOT crumble up some fresh bread, and consider that to be bread crumbs. Okay, as the butter melts it will coat the bread crumbs. Stirring will keep clumps from forming.

Step 12: Slam the macaroni into the oven and bake at 350 degrees, until hot. This should take about 30 minutes.

Step 13: Yank it out of the oven and serve. At long last, dinner is done! Bravissimo!