The Ten Magic Secrets of Life

I recently submitted a DNA sample to ancestry.com, to learn about my ethnic heritage. I was kind of surprised with the results. Turns out I’m half Scandiwhovian. I’m a Nordic. A Viking. A descendant of rapers and pillagers who terrorized the west coasts of Europe for hundreds of years.

I am Tippy the Terrible.

Well not really, but I must admit that discovering I had such strong Norse roots kind of went to my head. I began imagining my ancestors chasing unicorns through the elfin forests of Lapland, and across the wolds and into the wealds of the ancient European landscape. 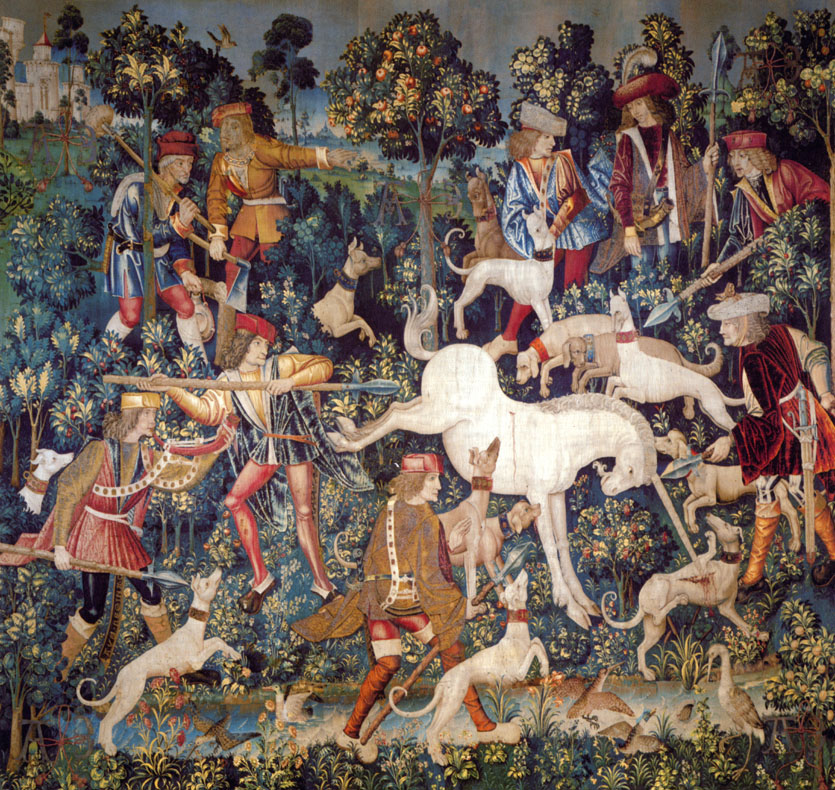 “The Unicorn Defending Himself”-Tapestry, circa 1500.

One night I drifted off to sleep meditating on images of horn-helmeted men disembarking from longships, with blood-curdling war cries and swords and shields swinging about their heads. And then suddenly I was there with them, on a unicorn hunt. I found myself footslogging with a hunting party for miles upon endless miles, across a windthrown, treefallen forest, before I grew weary and sat down upon a gnarled log to rest.

Without warning, through the dreamy mist, an old wizened Viking appeared. He sat down next to me, placed a bony, wrinkled hand upon my shoulder, and spoke with a deep, crackling voice:

“My name is Olov Ragnarsson. Remember that name, for I am your grandsire from ancient times. And I am one of the foremost unicorn hunters who has ever lived!” he puffed up his chest proudly as foggy breath streamed from his mouth and nostrils. He then touched his finger to his lips and whispered, “Listen to my secrets, for I am wise, having survived many seasons on the sea and in the woods.

“Yea, my skin has shivered through scores of winters, and sizzled beneath thousands of summer suns, while hunting unicorns. And I’ve enjoyed my share of those triumphs one boasts about in the firelight. Many times have I stood proudly before the admiring gazes of my fellow savages, while studying their faces through flickering flames, for any signs of veiled envy.

“But I’ve also suffered my share of humiliations,” Olov lowered his head in shame. “These weak moments have led me to skulk in the shadows, pelted by prideful stories volleyed from the mouths of luckier or more skillful compatriots.”

He straightened his raddled frame as best he could, and held up two fingers next to his face, and continued, “There have been two great Messengers in my life. I call them Success and Failure. These Messengers have taught me valuable lessons. Lessons that I have chopped and macerated and reduced in this charred and boiling stewpot of my mind, to the reasonable number of ten.”

“I’ve named this decalogue The Ten Magic Secrets of Life. They’re magic, because anything touched by unicorns is magic. And they’re secret only because so many fools refuse to learn them.”

He gazed at me with puzzled eyes. “I understand that you, in your modern time, have this thing called a ‘blog’. I want to share my secret decalogue with you, that you may pass it along in your ‘blog’ to the young unicorn hunters of your time.”

I began to protest. I tried to explain that most of my followers weren’t so young. And they probably had no interest in something as dull as a life lecture. And that in fact, I was feeling a little bored myself. I yawned, and asked him if he had any good Viking jokes I could pass along.

“Quiet!” he bellowed. And blue flames shot from his eyes, as he sizzled me with a contemptuous stare. “Honor thy grandsire, and make me not ashamed to be your progenitor!”

I gulped and shut up.

After a long minute of smoldering rumination, Olov commenced to share his secrets.

“I share these secrets now,” he kind of muttered in solemn, barely audible tone, “for the benefit of young hunters, new to the path, tremulous with ambition to score a kill. Learn these lessons, you whippersnappers, and apply them to every pursuit of the one-horned beast. If you shall, I guarantee you a mickle of fine trophies on the trail, a center stage in the lambent glow of the campfire, and a life of magical euphoria, showered in the stardust of all past, present, and future glory.”

Then Olov began enumerating his secrets, while pushing succeeding fingers up from an enclosed fist, one-by-one, as he progressed through the list.

“THE TEN MAGIC SECRETS OF LIFE!!” he announced with stentorian fury. Then he hushed his voice, as if to sacralize his secrets.

I. “No unicorn stays in one place permanently, and nothing is certain about the habits of a unicorn. This favors the adventuresome hunters over those who want every hunt to be the same.

II. “It is impossible to know anything about the magic of unicorns. Their magic can only be felt.

III. “Every unicorn has a price. None can be had for free.

IV. “Unicorns are numerous, and they often come to you on their own. They don’t always have to be hunted.

V. “The need to hunt unicorns never goes away forever. So take your naps when you can get them. (so this is where my love for naps came from!)

VI. “No unicorn ever saved the world with its sacrifice, and none ever will. But many have saved themselves from hunters, when not trying to save the world.

VII. “Unicorns are naturally wild and independent. When you try to change or control them, this will be the beginning of your troubles.

VIII. “When a unicorn gores you, it’s sending a message. It is better to learn from this message, than to imitate the unicorn and pass it along to other hunters.

X. “Gratitude is a rare commodity. Think fondly of the unicorns you’ve slain. This repays their legacy with a treasure more precious than many giant pots of gold.”

After Olov spoke the word “gold” a golden fog enveloped him, and he faded from sight. And then the forest around me dissolved. And then I realized I had just awakened from a dream.

I feared Olov might return in my next dream, and run me through with a sword, if I did not comply with his wishes. So I quickly jumped out of bed and wrote down his ten magic secrets while they were fresh in my memory. Then I got on my computer and dashed off this post.

By the way, ancestry.com also says I have Spanish blood in my veins. I’m done with the Vikings. Those bastards are too scary for me. So tonight I shall go to bed harboring meditations on lances and windmills, and a toilworn old jackass named “Rocinante”.