Note: This post about a museum first appeared in my erstwhile blog, “Golden Daze”, in March, 2015. I’m reposting it, with a bit of an update, because the docent of the museum has appeared in the October 30, 2016 issue of The New York Times Magazine.

“Welcome”. It’s an anagram of sorts.

Desert rats worldwide have a common problem. They are landscape-challenged. Arid conditions prevent cultivating broad greenswards that require careful and tedious manicuring upon riding lawnmowers. The scarcity of water discourages weeping willows that droop over emerald ponds teeming with carp. And the sylvan pleasance and backyard woodlot are just east coast fantasies to dream about, for your average desert rat.

Instead of grass and trees, desert rats have junk. They adorn their barren yards with detritus such as colored bottles, old tires, and rusty retired automobiles. Some desert rats are sloppy, with hardscapes surrounding their shacks that are downright depressing. Others have moved up the scale, to a level of kitschy, with a little artistic planning and arrangement. And some desert decorators have talent that lifts them into a league of their own. 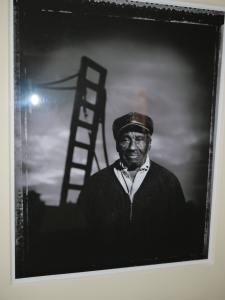 Noah Purifoy was that kind of decorator. In fact, he was legendary.

Noah Purifoy was born far from the desert, in Alabama, in 1917. He was a pretty smart guy, and earned a bachelor’s degree before serving in World War II, and a Masters of Social Service Administration shortly after the war. In the 1950s he earned a bachelor of fine arts degree from the Chouinard Art Institute. He was gifted at art in a peculiar way. He developed the uncanny knack to turn junk into something interesting and provocative to gaze upon and admire.

In the 1960s he became the founder and first director of the Watts Towers Art Center, in the Watts neighborhood of Los Angeles. But he didn’t sculpt the famous Watts Towers himself. That was the work of Simon Rodia. Noah’s star of fame didn’t really begin to rise until after the Watts riots of 1965. He and six other artists collected several tons of debris from the riots and created the ground-breaking 66 Signs of Neon traveling exhibition.

Noah created many other works of art, following this, and is credited with re-defining black artistic consciousness through assemblage sculpture. 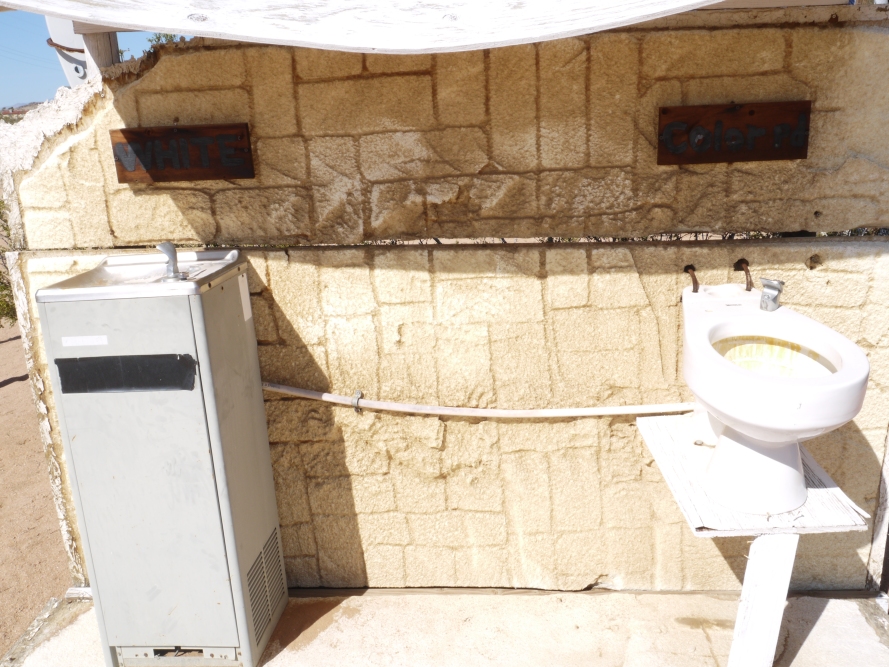 The left sign says “White” and the right says “Colored”.

In 1989 he moved to Joshua Tree, California and became a desert rat. He was 72, but not at all retired. He continued his work in the humanities by collecting all kinds of junk, including many old toilets, scrap wood, scrap metal, and discarded tires. And then he began adorning his acreage with odd sculptures designed to awe and inspire. He quickly showed even the most veteran desert rats the true art of desert landscaping.

Over the next 15 years, he sprinkled his property with dozens of junk sculptures. It opened to the public with the name, The Noah Purifoy Outdoor Desert Art Museum. But most folks just call it Noah’s Art.

By 2004, Noah’s health had failed to the point where he was confined to a wheelchair. And he was drinking and smoking heavily. One evening he dozed off in his wheelchair with a lit cigarette in hand. His little desert shack ignited and he burned to death.

But Noah’s Art remains. It’s still open to the public. Admission is free, but you are welcome to leave a donation. An 81-year-old lady named Pat Brunty maintains the grounds and serves as docent.

Pat is a friend of ours, and a very sweet person. And she’s a hard worker, which is amazing for someone her age. She does much of the manual labor required to keep Noah’s museum open and presentable to the public.

Pat Brunty and her dog Freckles.

Pat is also pictured on pag 54 of the October 30, 2016 issue of The New York Times Magazine. There’s a short article in the magazine about this unusual museum, with several pages of photos.

Pat can give you an impromptu tour if she happens to be there when you visit. She knew Noah personally, and has some interesting tales to tell about this character.

Noah’s Art is an outdoor museum, subject to the destruction of the elements. It is slowly falling into labefaction, grinding and sifting back into the desert sands under the oppressive Mojave wind, sun, cold and heat. If you want to admire it before it disappears completely, you can find it near the corner of Blair Lane and Center Ave, in Joshua Tree, California. And you can learn more about it at noahpurifoy.com. 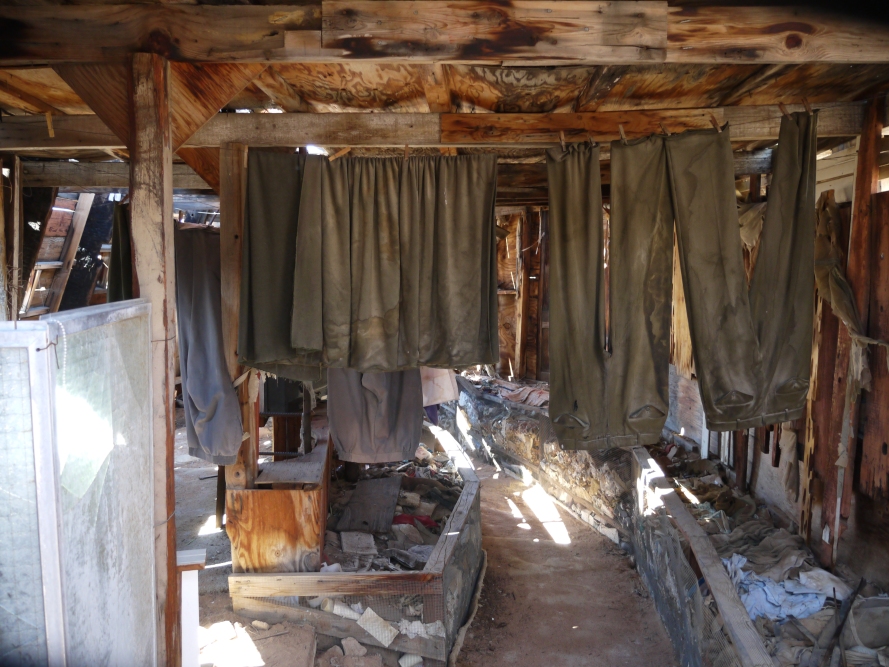