When people plan a visit to the Grand Canyon, they usually make a choice between the North Rim or the South Rim of Grand Canyon National Park. But this wonder of the world can also be seen without the National Park Service playing host.

If you go to Grand Canyon West.

Grand Canyon West is hosted by the Hualapai Indian tribe. Hualapai (pronounced Whollop-Eye) means People of the Tall Pines. For centuries the Hualapai’s have lived and and died in these majestic lands skirting the southwestern rim of the Grand Canyon. And here they’ve been confined to the Hualapai reservation since the 1800’s. 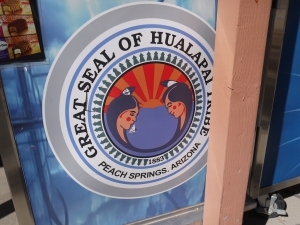 Great Seal of the Hualapai Tribe.

Not only has the Grand Canyon separated them from the rest of our country, but so has a deep chasm of poverty. At least until the 1980’s. That’s when they came up with a grand plan to raise a few bucks. They designed and built a tourist facility, called Grand Canyon West. And now, over the past 30 years, these clever and enterprising Native Americans have been growing in prosperity, while attracting unsuspecting tourists from all over the world. 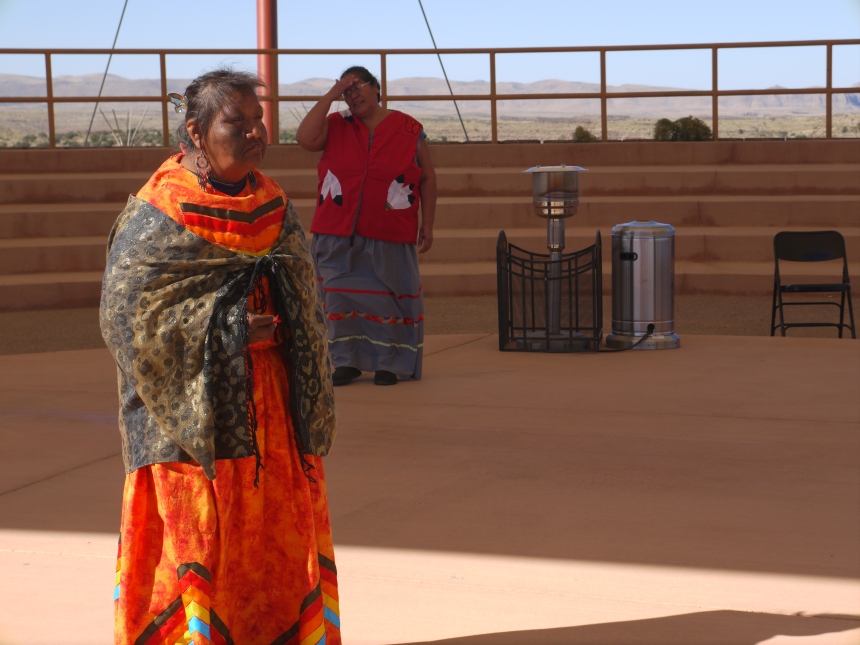 My wife and I were two such unsuspecting tourists, just a few days ago. Well actually, we did suspect a few things. We read the Yelp reviews. These mixed reviews led us to approach with caution. We only paid the basic entrance fee of $40.00 per person, and decided against paying the extra $20.00 to walk on their famous Skywalk, or the extra $10.00 to eat their famous beef mush, or the extra $187.00 to take their famous five-minute helicopter ride combo 20-minute pontoon boat splash.

We’re oh so grateful for those reviews and our caution. Overall, we enjoyed ourselves, but I must say our experience was just like the Yelp reviews. It was mixed. 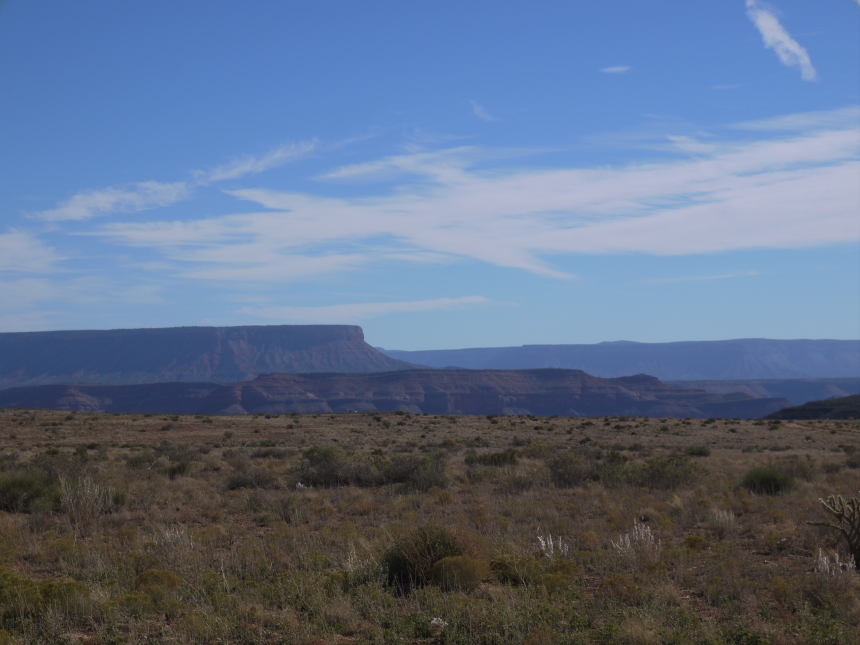 The barely visible rim hinting of the Grand Canyon below, from Hualapai Ranch.

We drove two hours from our beachhead at the gambling town of Laughlin, Nevada. The drive was a bit confounding. I could not get my GPS to find their address, so I had to guess on the waypoint. Signage along the way helped out, until we got deep into the heart of the Arizona wilderness. That’s when, for some strange reason, the Hualapai’s decided to stop putting up those friendly helpful signs guiding us to their place of business.

We sweated it out for quite a stretch, wondering if we should have turned down that other road 30 or so miles back. But then we saw some tourist buses heading in our same direction and that gave us the reassurance we needed. 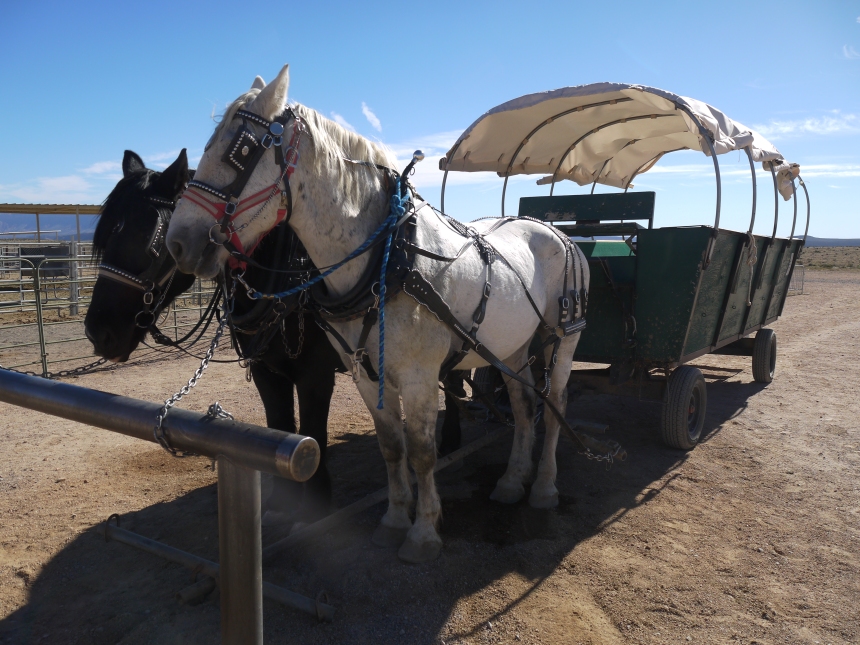 A waiting taxi, at Hualapai Ranch.

Parking was plentiful and easy. However, this was a Tuesday. And with such available parking, my wife and I began congratulating ourselves on how clever we were for planning this trip during the middle of the week, where we could beat the crowds. But what we failed to remember was those tourist buses.

Those buses were loaded with Japanese tourists, who had been brought in for a day trip from Las Vegas, where they had been vacationing. And there were hundreds and hundreds of these selfie-stick-toting Asians.

The grounds were hurly-burly with scrambling tourist guides barking out loud commands in Japanese to their Asian minions, over the obstreperous machinery of the whirlybirds. 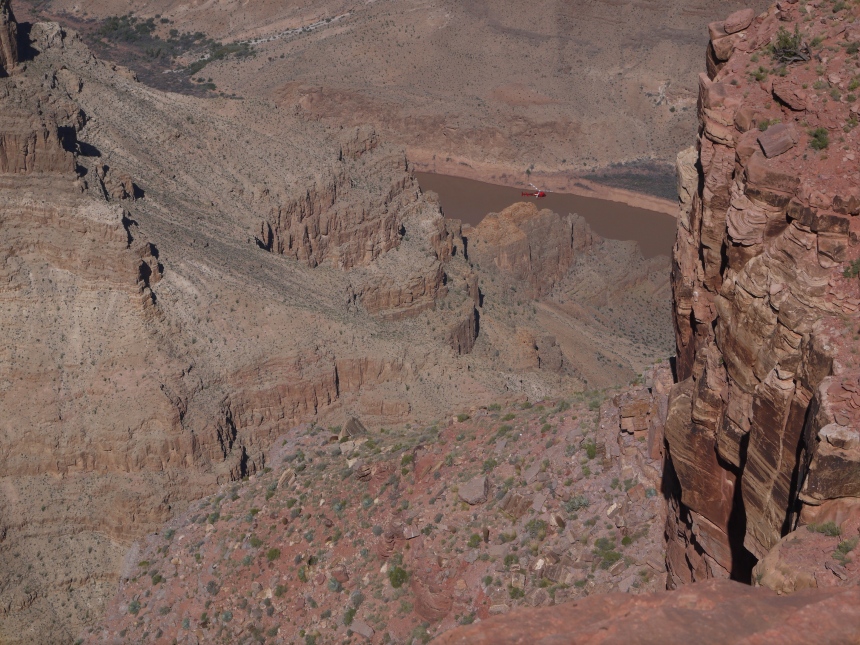 Can you spot the helicopter?

But not all the Japanese wanted to ride in helicopters. Several hundreds of them were wise enough to opt for the same basic ticket package that my wife and I went for. This package included unlimited riding on the shuttle buses that take you from point to point to all the attractions at Grand Canyon West.

There are three attractions.

We crowded onto a bus that may as well have been in downtown Tokyo. And what I’ve heard about so-called Japanese rudeness was confirmed on this and other buses. I don’t think they mean to be rude. But Japan is a crowded island. The Japanese have apparently developed the survival habit of fighting amongst each other to board their public transportation, such as trains, subways, and buses. It was every man, woman, and child for themselves. 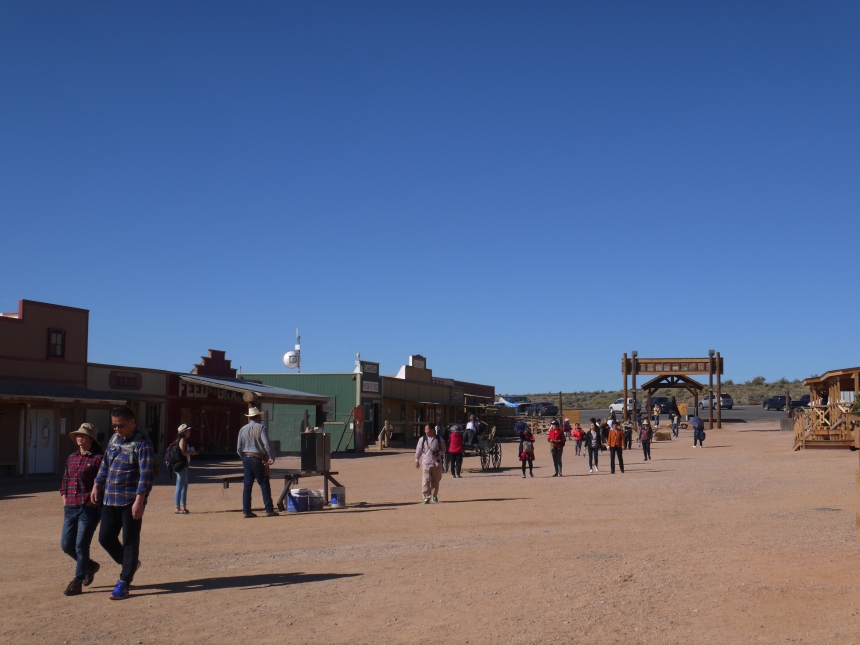 Hualapai Ranch. Does this look like a ranch to you?

Our first stop was Hualapai Ranch. As my wife and I, and all the Far Eastern visitors aboard our bus attempted to debouch, Japanese tourists outside attempted to board, without waiting for us to get off. This impoliteness made for a calamitous and comical exercise of people squeezing past each other from opposite directions, sometimes throwing each other back, and sometimes surging forward, like receding and advancing waves of soldiers involved in hand-to-hand combat.

After claiming victory in this battle by successfully debussing, my wife and I set off to explore our conquered territory. But we were disappointed. Hualapai Ranch was really nothing but a fake ghost town with a souvenir shop, horseback riding stable, and other businesses whose prime aim was to loosen up our wallets. We didn’t stay long. 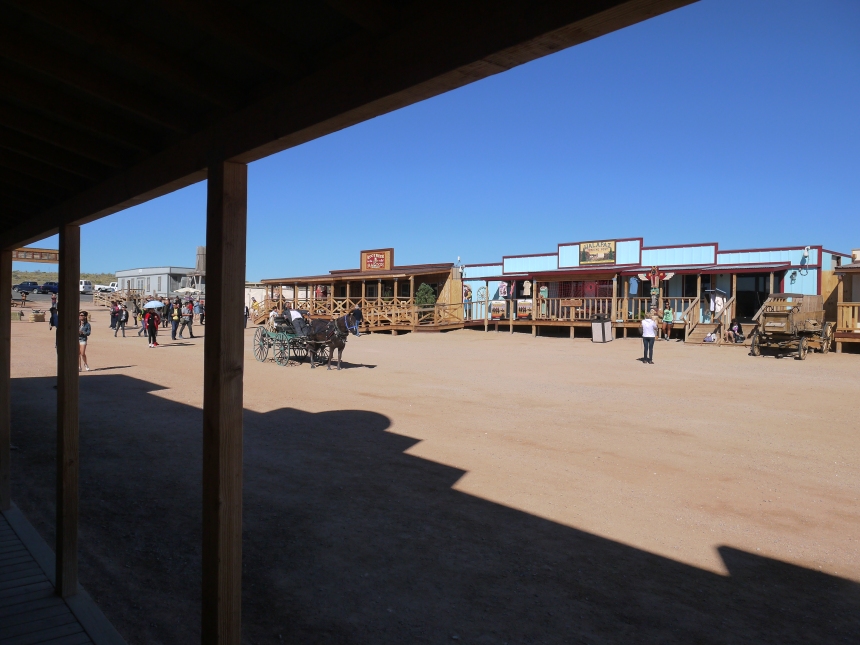 “Lissen you low-down yellow-bellied skunk. I’ll meet you in the middle of this here street at HIGH noon, an’ we’ll settle our beef once an’ fer all!” I found Hualapai Ranch kind of inspiring. It made me want to write a Western.

We raced for the bus stop and managed to be first in line. Well, it kind of resembled a line. Though we planted our feet exactly where we expected the bus door to open when the next shuttle would arrive, crafty Japanese began to encroach on both sides. When the approaching shuttle bus was descried, our Asian competitors hurried forward, threatening to overwhelm our position.

But then a loud war cry erupted from a stentorian Hualapai standing nearby. He gruffly ordered the tourists to fall back and form a line behind us. He was very authoritarian and even wore a uniform. This was the magic touch that was needed. Apparently the Japanese greatly respect authority, because everyone in the crowd obeyed instantly. And the bus was boarded in a polite and orderly manner. 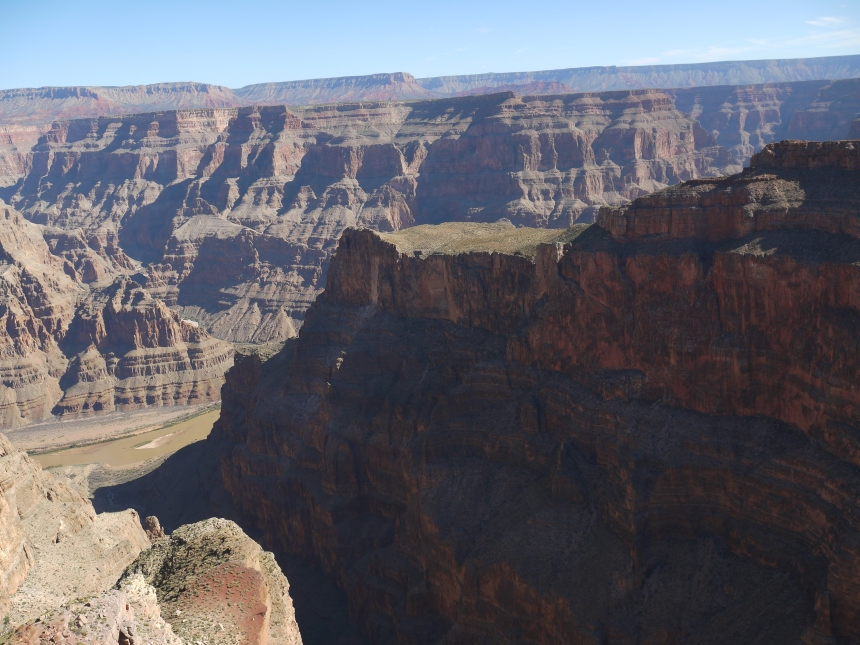 Off we rolled to Eagle Point. Eagle Point is the locale of the famous Skywalk. The Skywalk is a loop of plexiglass-floored walkway that extends from a cliffside building out over the Grand Canyon. For 20 bucks, tourists can tread upon it, and pretend they are walking on air. However cameras are not allowed. You must leave your camera and all other personal items behind, in a locker, before you are allowed on the Skywalk.

According to the Yelp reviews, you will be stalked by professional photographers with every step you take upon the Skywalk. They will snap many pictures of you, and for a mere $50 to a $100, you can buy these photos. This apparently is why you aren’t allowed to take your own camera with you on the Skywalk.

They want your money. 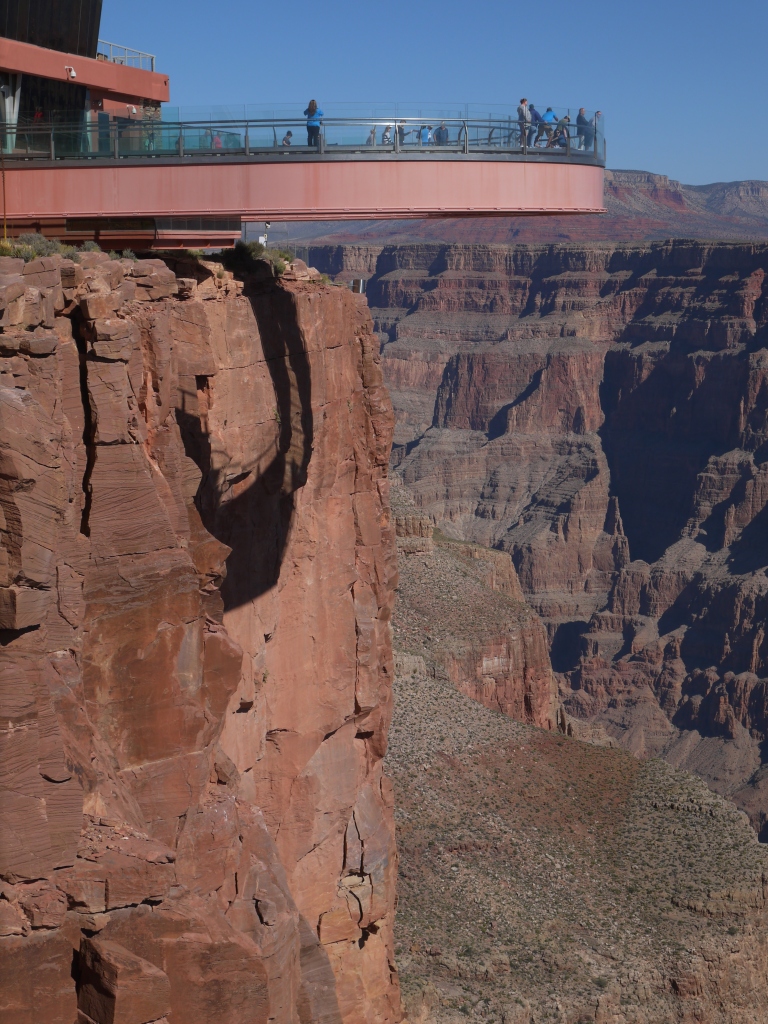 The Skywalk at Eagle Point. If you look carefully, you may notice tourists up there running from photographers.

But we didn’t pay for such nonsense. And the view of the Grand Canyon at Eagle Point is spectacular, whether or not you walk the Skywalk.

The third and final stop of the shuttle bus was at Guano Point. We were herded like cattle onto this bus, and it was standing room only for hapless stragglers. My wife found the last seat, but I had to hang onto a bar, while being crushed between two grim-faced Asian men who clung to the same bar. 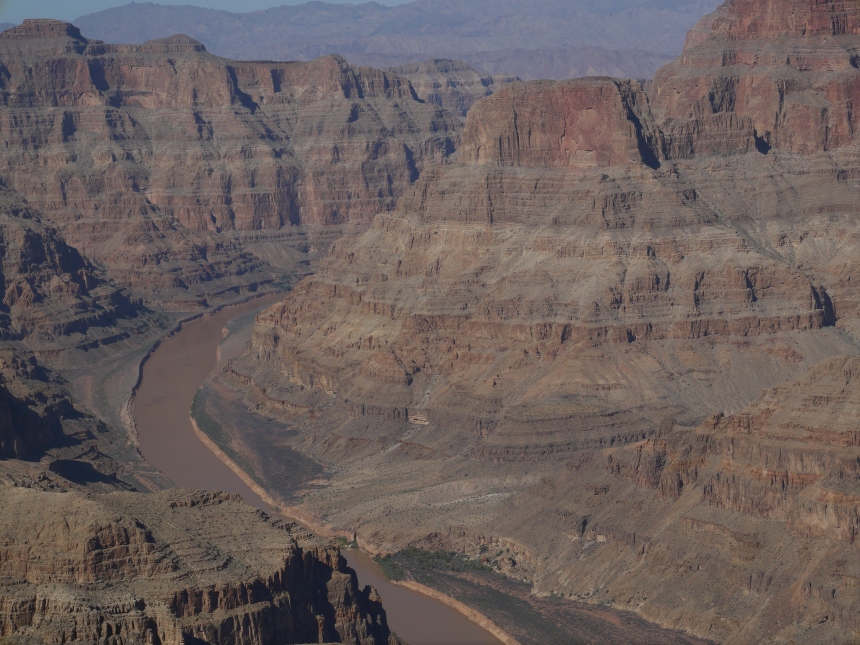 The Colorado River from Guano Point.

Guano Point is the site of an old guano mine. You can hike about a half mile out to the mine, over a promontory that juts into the Grand Canyon. There are many vantage points along this route for snapping breathtaking photos of the Colorado River. 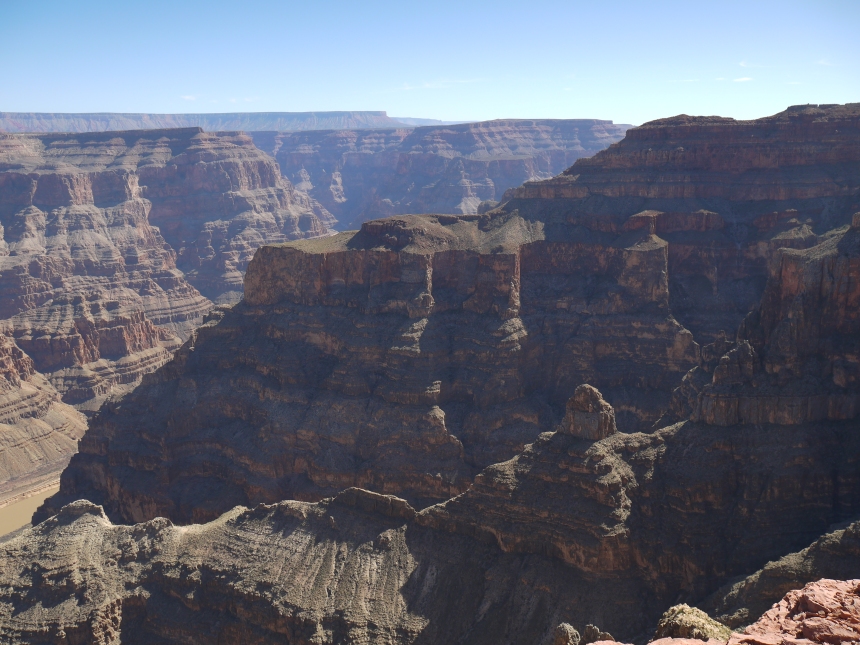 After Guano Point we were anxious to get the hell out of this tourist trap. We had spent about two-and-a-half hours at Grand Canyon West, and that was enough for us. Besides, we’d seen all there was to see. 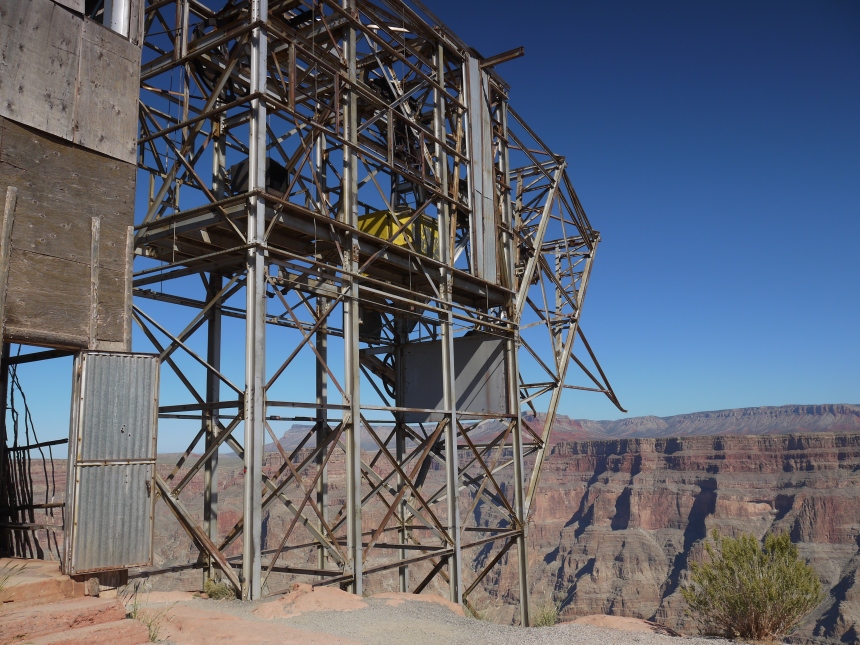 Remains of the guano mine at Guano Point. An Air Force jet put this mine out of commission in 1960, when its tail clipped a cable that spanned the width of the Canyon.

All-in-all, I’d say it was worth doing this as a one-time experience. But my wife and I agree that we will never go back again. It’s too crowded and too touristy for us. And there are only two viewpoints.

But I must admit they are great views. And it’s the only place where you get to see the tail-end of the Grand Canyon, just a few miles before the Colorado River empties into Lake Mead. 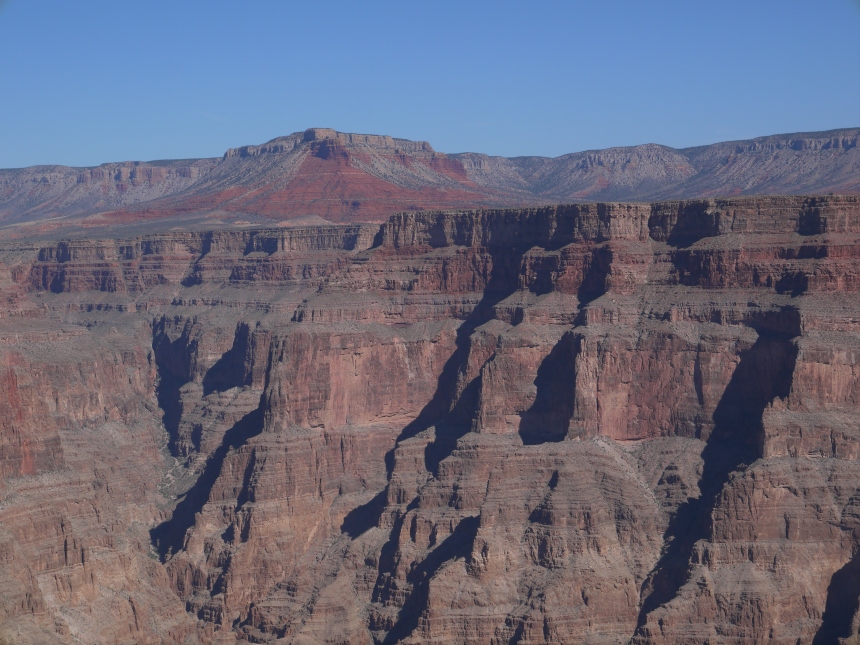 Northern rim of the Grand Canyon, from Guano Point.

If you decide to visit this tourist trap, don’t expect to have a one-with-nature kind of experience. There are just too many people and there’s too much noise from all the helicopters whirring about. But bring your camera. I guarantee you’ll have a great time snapping lots of stunning photos.

Except, of course, on the Skywalk. 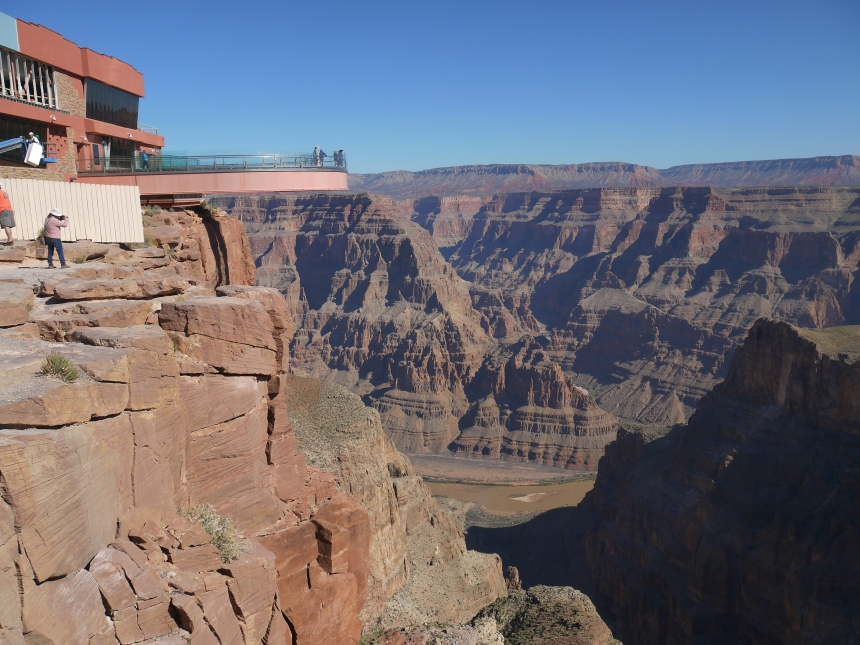 The view seems like it’s just about as good off the Skywalk, as on. And the photography is free.