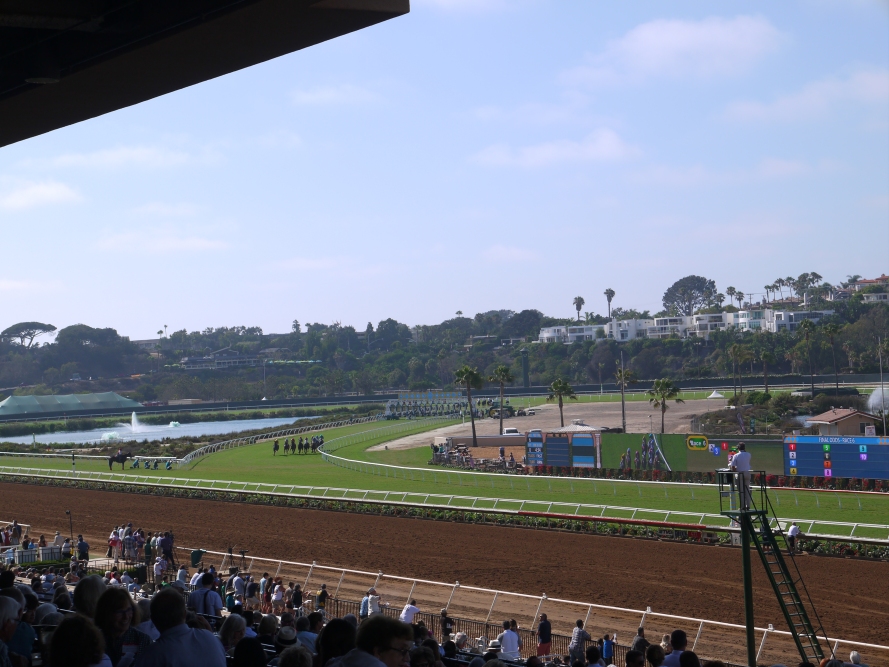 This race has just started, on the turf infield, at the Del Mar Fairgrounds, Del Mar, California.

Britt Layton was a rising star in the world of horse racing back in the 1940s. He even dabbled in show business. He played an uncredited bit part in the 1950 movie “Riding High”, which starred Bing Crosby, Colleen Gray, and Charles Bickford. But enough with the name-dropping. This is about a different story. A story I call Beauty and the Beast.

The beauty is the spectacle of horse racing. The beast is its dark underbelly. But I love horse racing. No sport has more beauty than these muscular equines barreling down the racetrack at breakneck gallop. My adrenaline runs wild. My heart soars. I love seeing the wildness and freedom of tons of horseflesh vying and stretching for the finish line. It’s absolutely beautiful.

But with any beauty comes a beast.

Britt met the jaws of the beast on a racetrack called Hollywood Park. He caused a multi-horse pileup, probably because he’d been drinking too much. After this he had a hard time finding anyone who’d let him race their horse. It would have helped if he had quit drinking, but instead his drinking just got worse. His career went downhill, and by 1953 he’d ridden his last race.

A turf finish. Turf races are often reserved for older horses, and horses with soreness from racing too frequently. The grass is easier on their hooves and legs.

My mother met him in an alcohol rehabilitation center, where she worked. They fell in love in a whirlwind romance, and married two months later. I was eleven years old, and excited about this new stepfather. He was fun. And unlike my previous stepfather, he was not abusive.

He operated a riding stable, and introduced us to the world of equestrian life. And he stayed sober.

For about three months or so.

One day he took us to the Del Mar racetrack, in Del Mar, California. That’s the place in the Bing Crosby song, where The Turf Meets the Surf. You could get in free in those days, and that’s all we could afford. We were railbirds (couldn’t afford seats). But the rails is where you get the best glimpse of the beauties, anyway, as they sail past.

Britt was animated as he taught us all about the thoroughbreds and the behind-the-scenes aspects of racing. That’s when I learned that horses were often doped.

“It’s illegal,” he said, “but they do it anyway.” And then he added with a heavy, sad voice, “You’d be shocked with what they get away with here.” Of course I was eager to know all the details, but he shut up after that. A little while later I smelled vodka on his breath. The beast had him again.

A scattered field is finishing this race. The guy on the tower at the right is the finishing line judge.

About three months or so after the wedding, Britt returned to his former habits of a stumbling-down, sleep-in-the-gutter drunk. He was eventually fired from the riding stable. We had to move into an old house way out on a dirt road. He and my mother fought. It was pathetic to see this erstwhile successful, fun man reduced to such a helpless slave of the bottle. My mother annulled the marriage before their first anniversary. She scratched him out of her life. About eight years later he was scratched again, when he died a broken, drunken man, at age 60. 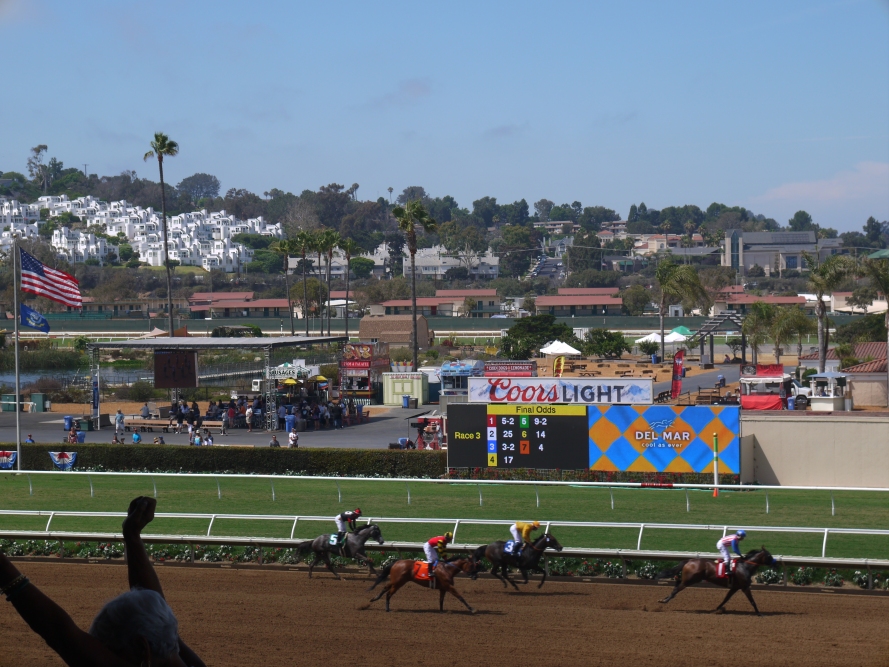 Finishes can be pretty exciting. Especially when the horse you bet on wins.

But he inspired a love for horses in my older sister. She could see the beauty, and she held onto it. In fact she made a career of working in the equine industry. Today she owns a large ranch, and specializes in training gaited trail horses. This is such a highly specialized niche that she has practically cornered the market on it in Southern California, and has become well-known and highly reputed in the local horse world.

She has a few friends in the horse racing business, who follow the racing circuit. This time of year you’ll find some of them working behind the scenes at Del Mar. In fact, last year around this time, one of them gave my sister a “backstage” tour, and she actually got to meet American Pharoah, the Triple Crown Winner. My sister says it was one of the most exciting days in her life.

I think this was a photo finish. I hope the horses remembered to smile.

A few days ago I treated her to a day at the races. We met at the Del Mar Fairgrounds. We watched the thoroughbred beauties roar past us like hurricanes, sometimes observing from the rail, and sometimes watching from the seats. And we recounted that palmy day when Britt took us to this very track when we were kids.

Then she got on her cell phone to call one of her racing friends. We were hoping for another backstage tour.

“He’s too busy,” she announced with sadness in her voice, as she set down the phone. “He says there have been two euthanizations, and he has to assist with the necropsies.”

“He said two is about what they average per day,” my sister glumly answered. “He said they often die of overdoses. Illegal drugs.”

I mentioned that some people say that horse racing is cruelty to animals. My sister agreed with that. And it certainly seemed so to me.

But then a pack of thoroughbreds rounded the far turn and flew down the stretch. Everyone stood and shouted and urged the horses on. Including me. I felt that same old, familiar thrill. An electric frisson raced up and down my spine. I tell you, there’s nothing more beautiful and awe-inspiring than these magnificent horses at a full-tilt run.

I have to believe the horses also feel a thrill. How great it must be for them to be out of their paddocks and free to stretch their legs as fast as they can, with a herd of their own kind. Is it really cruelty to animals? Aren’t they doing what comes naturally to them, and with a release of pent-up wild gusto?

The close races are the most exciting.

I studied my racing program, to make my picks for horses in upcoming races. I noticed that a few had been scratched. I wondered, were some of these the ones who were devoured by the beast today?

A name caught my eye. Sid the Squid. What a name! I have a highly sophisticated betting scheme. I bet on the name that best strikes my fancy. And Sid the Squid was ready to race. He had not been scratched.

I headed down to the wicket, with two bucks in hand.

“Two dollars on Sid the Squid.”

“To Win, Place, or Show?” the man behind the counter growled.

“No, just to not be scratched.”

“All right, to Show then,” and he took my money.

He ran seventh in a field of eight. And lived. That was showing enough for me. It was a good race.

Because in the case of Sid the Squid, beauty was not scratched by the beast.