There once was a people who lived in a high, lonely desert. These poor bastards could barely scratch out a living. They ate anything that moved. Lizards, bugs, worms, whatever. If it was alive, it was fair game.

They also planted crops, but never reaped much of a harvest in that damned dry desert. Usually they starved beneath blue skies.

But they lived together in peace. Hell, they had to. They had to have everyone working together in harmony, pooling their wits, talents, and efforts, to put food in their mouths. Their peace was born out of desperation.

They lived this way for who knows? Hundreds? Maybe thousands, of years? It was a long time, that’s for sure, spanning many, many generations. And so naturally their peaceful way of life became custom and ritual. Peace became a skill learned from birth. Resolution of conflict became second-nature to these people. Everyone was a diplomat, in their coordinated quest for food.

And as hardscrabble as that quest for food always was, one day it became even harder. One morning as they went to work in their wilted, scraggly fields of miserable crops, the earth began to shake. Giant cracks spiderwebbed for miles around. Fire and smoke belched out of the earth and shot thousands of feet into the air.

A volcano was born in their midst.

Everyone ran like hell for their lives. Within days their farmlands and hunting grounds were completely destroyed. The volcanic mountain lifted their land a thousand feet and buried their homes and meager livelihood beneath rivers of lava, piles of rock, and tons of ash.

And after the main eruption, a blanket of gray ash covered the desert for miles around.

Everything about their lives was knocked balls up and arsy-versy. Now what the hell would they do? They could point fingers of blame at each other for their misfortune. They could seek a scapegoat. Perhaps sacrifice a virgin. But none of that could put food into their mouths.

They could turn to cannibalism. That would put food in some of their mouths. At least for a while. But cannibalism is kind of a deadend street. And it runs completely counter to a people who know only peace and team effort.

Amazingly, nobody died in the eruption. Together, they managed to escape the cataclysm, so together they must manage to pick up all the pieces and figure out how to keep from starving to death. So these peons who’d been shit on so cruelly by the gods, went to work in a community effort to recover what they had lost.

Initially they had to resort to eating insects and all sorts of foul things. But then some rains fell, and they discovered that the volcanic ash underfoot was like a sponge. It absorbed and retained water, and actually increased the fertility of the soil. So they got excited about that, and got back to the business of planting crops.

And oh, how those crops grew! Their next harvest produced an abundance they had never experienced before. As did the next and the next. Before they knew it, their stores had more food than mouths available to eat it.

Starvation became a thing of the past.

They grew prosperous and did what many rich people do when they move on up in life. They made babies. Their population multiplied. And they built many houses of stone to accommodate their large families, and dotted the landscape with settlements surrounded by fields of bumper crops.

Trade developed, because in spite of all the new babies they still had more food than they could consume by themselves. People from all over traveled to this new civilization to trade luxury items for their food. The volcano, with its belching black smoke, served as a beacon for travelers, guiding them to this flourishing region.

A large complex was built to accomodate all the new arrivals. People of many tongues met at this business center. They intermingled, traded, and played games. And they cohabitated in peace, following the example of their hosts, who retained their peaceful customs and way of life even during this time of great wealth.

Many wonderful things were carried from afar to these people. Traders from the south brought scarlet macaw birds and exotic copper bells. Woven cotton textiles from the north were proffered and bartered. Red clay pottery arrived from the west, and black and white pots were imported from the northeast.

Their civilization became known and celebrated far and wide.

This is no bullshit. It ain’t a fairy tale. Believe it or not, this story is based on true events. Okay, so I might have embellished a little. I always embellish some when I tell a story. But I’d say it’s about 97% to 98% accurate.

Historians call the people I’m writing about, the Sinagua. But nobody knows what they actually called themselves. They lived in present-day northern Arizona about a thousand years ago.

Sunset Crater, in Sunset Crater National Monument. It formed from a violent eruption in 1065 AD, then smoldered and poured out ash for the next hundred years.

Humprheys Peak is a volcano that formed earlier. At 12,637 feet, Humphreys Peak is the highest point in Arizona, and is found 12 miles north of Flagstaff. Sunset Crater lies 10 miles east of Humphreys peak, and can be found in Sunset Crater National Monument, at an elevation of 8,041 feet.

The Sinagua got a big kick in the teeth from the eruption of Sunset Crater. But then they turned lemons into lemonade. Or pee into tea. Or a big shit into a bit hit. Or their knocked out teeth into chiclets. Okay, okay, enough with the metaphors. I think you know what I mean.

After the eruption, this resilient people resettled just north of Sunset Crater, in what is now called Wupatki National Monument. It was here they started farming those big bumper crops, and here they built their great civilization, that flourished in trade and other multicultural exchange.

Wupatki Pueblo, Wupatki National Monument, AZ. This hundred-room complex is the equivalent to our modern-day shopping mall. Traders traveled for hundreds of miles, to meet and swap goods here. And of course, teenagers, panhandlers, and proselytizers may also have used this as a hangout.

But after about 100 years of spewing smoke and ash, Sunset Crater ran out of batteries and grew dormant. The lifegiving cinder ash ceased to fall. The Sinagua’s manna from heaven disappeared.

This pueblo in Wupatki National Monument is known as “The Citadel”. The rich folks who could afford this view would probably have seen far-reaching fields of maize, squash and beans. And perhaps a few succotash bushes. Yes, I think they also grew succotash.

Within 50 more years the remaining ash was tilled to exhaustion, lost to the high plateau breeze, and washed away by the thunder gods. Nothing remained to absorb and retain moisture from scarce rains. The desert recovered its territory. This forced most of the Sinagua people to move on to new horizons and different fortunes. And all that remains today is the ruins of the great civilization they left behind.

This sports arena near Wupatki Pueblo, hosted teams with names such as the Arizona Diamondbacks, Arizona Cardinals, and Phoenix Suns.

Think of all the human stories that have been lost forever here. Tales of love and exotic travel. Of derring-do. Of warm family gatherings around evening fires. All lost. All absorbed by the soil. These stories have become too faint to hear, from the echoes of the crumbling walls.

Lomaki Pueblo, Wupatki National Monument. The walls were made of fieldstone, cemented together by some sort of mortar. The few windows were very small. The roofs were constructed of large timbers overlayed by smaller branches, that was then coated by mud. After the pueblos were abandoned, the timbers were scavenged for firewood.

But not all was lost. Again, they still had each other, and they were still a people of peace. The Sinagua eventually came together again to form the Hopi tribe of Native Americans.

What the heck is Hopi? Well Hopi is a spiritual word, with a meaning that goes beyond it’s literal translation. Hopi is religion. To be Hopi is to strive for a total state of reverence and respect for all things. It is to be at peace with the world, and to live in accordance with the instructions of the Caretaker of the Earth. 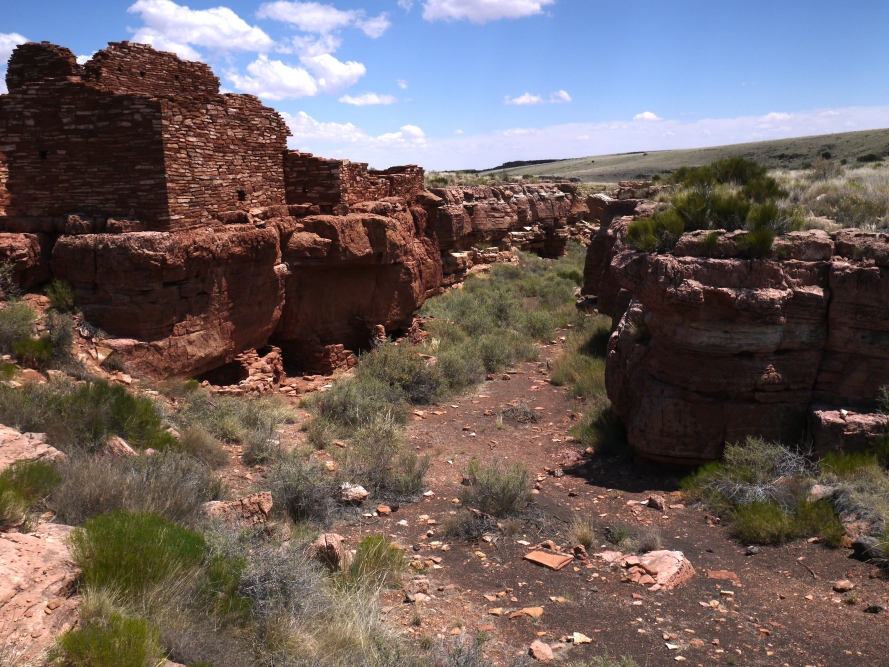 Lomaki Pueblo, Wupatki National Monument, AZ. Crops were often planted in box canyons such as this, which tended to collect more water than could collect in open terrain. The box canyons were actually earth cracks formed by the Sunset Crater volcano.

Hopi sounds much like the word “hope” to me. But it literally translates to, “The Peaceful People.” And so here’s a homily. Here’s a chance to preach a message. And by all means, please be generous when I pass the collection plate. It’s all going to a good cause. Me!

Anyway, it seems to me that Hopi is the attitude we need, to transform difficult times into good fortune. We can apply it by learning how to revere and respect anything, including those things that disrupt our lives and cause unwanted change.

Hopi can tune and harmonize us with the world. It can prepare us for anything.

It can even help us make peace with volcanoes. 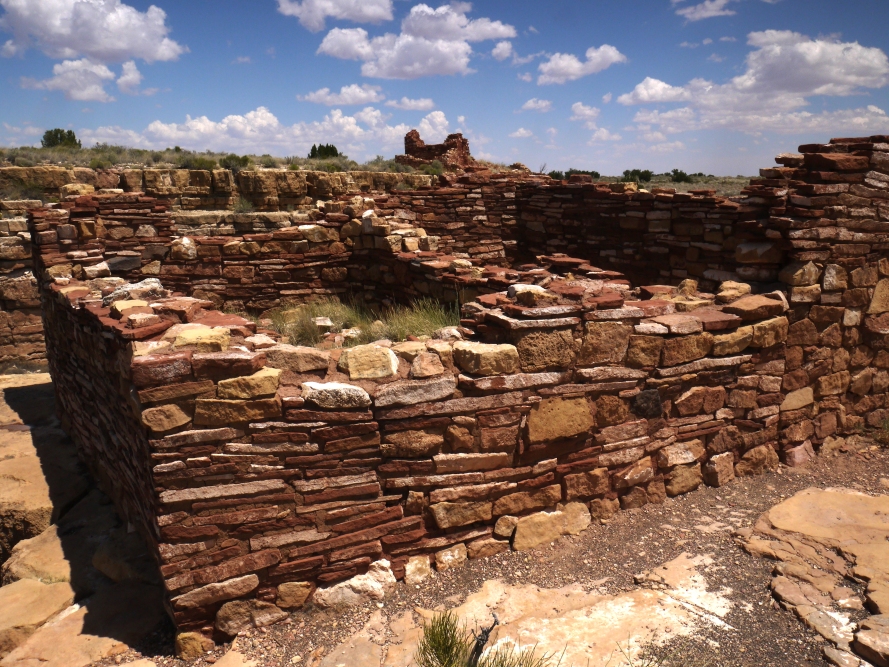 Box Canyon Pueblo, Wupatki National Monument. The rooms in these pueblos were used for sleeping and food storage. And perhaps by lazy people like me, seeking a place to hide from all that hard farm work.