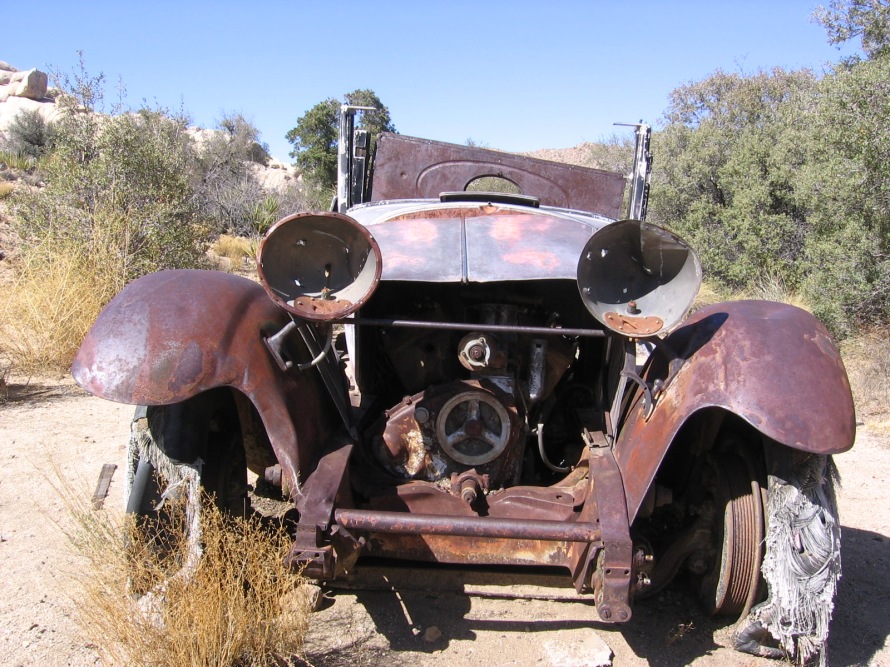 He was an old guy. I myself was a young man, still in my thirties, and not unwilling to take advantage of the senescent.

“It may look like a clunker, but it runs great,” he claimed. “It has a lot of good miles left on it.”

It was a 1961 Dodge something-or-other. One of those big trucks with no apparent model name. It was a two-ton flatbed. Just perfect for what I needed. And here’s the best part. The engine was tricked out with gold plating. Gilded in gold, I tell ya! But how well would this clinquant clunker run?

The starter engaging and spinning the flywheel played a sweet melody for about five seconds. And then came a powerful rumble and vibration of bolts, like a pyroclastic conflagration. This demon was a firebreather.

As it purred and rattled away like a kitten on a calculator, my brain added up some depressingly-high figures. “S-so, so how much do you want for it?” my voice atremble, in harmony with the running engine.

“Okay, okay, I know I can trust you. You’re a lot smarter than me when it comes to business, so it’s probably a very good deal. Go ahead and buy it.” she sighed.

I paid the money and drove this beauty for the first time. The accelerator was gently responsive, and the brake pedal was soft as a downy pillow. It floated uphill like a cloud, and coasted like a cool breeze downhill. Halfway through the 20-mile journey home I stopped and showed it off to a man who knows a lot about old trucks. He liked it so much, he helped me drive it home and park it in the front yard.

“What, you paid $600 for THAT?!” my wife guffawed. “I can’t ever trust you again with a business deal. You’re never going to live this down!” she laughed.

Learning comes automatically in life. Except when we refuse to learn. When our fantasies diverge from reality, we can refuse to acknowledge the way things really are. But when we swallow our pride, set aside our prejudices, or otherwise dispense of our fantasies, our eyes can open up to the beautiful lessons life has to teach us.

This truck was nowhere near anything I needed. I needed a small car for commuting, not a two-ton behemoth. And the engine was not plated in gold. That was rust. The sweet melody at startup was actually the heavy metal tune of a screaming starter motor and grinding gears. The powerful rumble and vibration might have been a loose engine mount. But the engine really did breathe fire. Straight out the carburetor.

The rattling inside was caused by loose rockers, or tappets that needed adjusting. The gently responsive accelerator was a flat spot caused by a clogged carburetor jet. The brake pedal was not soft as a downy pillow. It was more like a wet sponge. But the truck did float uphill like a cloud. Literally. There was a cloud of steam spewing from the radiator. And I was glad I could catch a cool breeze while coasting downhill, because that helped bring the temperature gauge down.

The man I stopped and showed this truck off to was a tow-truck driver. He accompanied me home, with me in the passenger seat beside him, and my truck up on the flatbed behind his cab.

It took me two months to derust the radiator, repair the engine, and make the brakes safe to use. Then I put an ad in the paper. A few guys showed up, stared at it, then shook their heads and walked away without making an offer.

Then one day some hillbilly dude dropped by and looked this old clunker over, and his hands began to shake. A quiver in his voice indicated to me that he had not completely seen my two-ton bucket of rust when he glanced at it. His fantasy kept obstructing his line of sight. But he wasn’t completely blind. He only offered $300. I took it.

Lesson learned. For me, at least.