This is a true story. But I’m changing some names to keep from being sued by a giant auto repair franchise. And I wouldn’t be surprised if they did sue. They seem to be aggressively out for all the money they can get.

My wife’s car got a nail in a rear tire, which started a slow leak. I wanted to avoid driving far, because it only had 17 lbs of pressure remaining, so I picked the closest tire repair shop in town. That would be “Big Deal Tire Center.”

“Did you buy the tires from us?” Dick Cheney asked. I’m changing his name to Dick Cheney so this bastard won’t sue me. In fact, I’ll just call him Dick.

“Then our charge is $24.99.” Dick solemnly announced with all the gravitas of a deep-tread Pirelli.

“All right,” I sighed. I’m accustomed to paying 15 to 20 bucks for a flat fix, but I guess $24.99 is my penalty for being a disloyal consumer. I just wanted the job done, and soon, and without having to traipse all over town on low air, seeking a low price.

About 20 minutes later, Dick summoned me over for a little talk.

“Sir, we inspected your vehicle and we found some problems. Your rear shocks are leaking. It’s ruined your rear tires. Your shocks and tires must be replaced.” Dick spoke like a cop reading me the rules of the road.

I knew about those rear shocks already. And judging from the tread remaining on the tires, I thought I could get five to ten thousand more miles on them before replacing anything.

“I know about that. No thanks. I just want the flat repaired,” I said gently but firmly.

“Those tires are bad. You HAVE to replace them. Now.” Dick grumbled. “I’ve worked it all out. This is what we’re going to charge you.” He handed me a computer-generated estimate.

I was pretty sure I could get this same work done at another shop for a fraction of the cost. “No thanks,” I reiterated, “I just want the flat fixed.”

Dick leaned over the counter, eyes piercing me like gimlets. “You have to have this done! Your tires are cupping and nippling! There are nipples forming on the tread. That could cause a blow-out!” he remonstrated with much authority in his voice.

Cupping and nippling? How can he say that with a straight face? And I’ve never heard of tires described as having nipples before. I stifled a laugh. 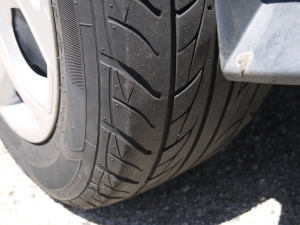 Where are all those cupped nipples?

Dick seemed angry. Maybe he thought he could intimidate me because I look like an old man. Well I am an old man. And I was needing a nap. I was tired, and was tempted to just give in. But I hate bastards like this, so I decided I wasn’t going to back down, come hell or high water.

“I only want the flat fixed,” I lowered my voice an octave.

He scowled at me. “This work HAS to be done!” Dick expostulated, penetrating me with his Dick-straight stare. He was a big, burly guy with large, round rings in his earlobes that made him look criminal tough. I feared for a moment that fisticuffs were going to break out between this scoundrel and me. But fuck Dick!

“I only want the flat fixed.” I firmly repeated. “Uh, is that going to be a problem? Should I take my car someplace else?”

Finally I was able to get that Dick out of my face. And about 20 minutes later the flat was repaired, and the car was ready to go.

I’d like to say I won’t go back to Big Deal Tire Center again, but I’ve run across this problem at other tire shops also. What is it with the hard sell?

Money, I guess. I imagine there are many people who are easily intimidated by authoritative, aggressive auto mechanics. Especially women and old men. I wonder how much money is wasted by these vulnerable people on overpriced, unnecessary repairs?

So I just want to warn you. Be careful when you take your car in for a simple tire repair. Bring a strong backbone and small wallet. And maybe take a martial arts course. Or you could end up in a big fix.