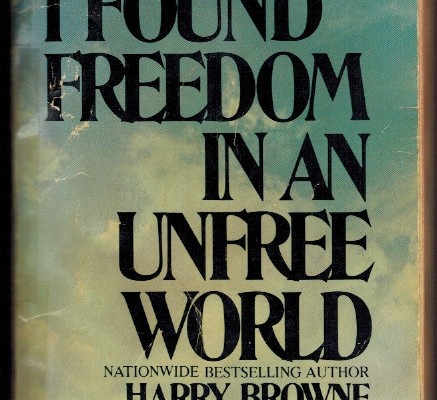 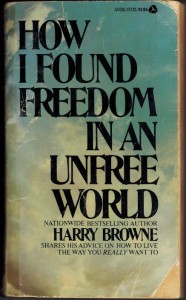 My thumbworn copy. Could be a collector’s item, since it’s out-of-print. But no, I’m not selling it.

Harry Browne died ten years ago today. Harry who, what the heck? Harry Browne. He was a candidate for U.S. President, you know.

I was in my 20’s. I was depressed and suicidal. I was broke and my life was going nowhere. Then I picked up the book How I Found Freedom in an Unfree World, by Harry Browne. This great book is now out of print, and that’s a shame. It applies libertarian philosophies to the traps we find ourselves in life, and shows you how to free yourself from those traps. Browne describes traps such as, The Morality Trap, The Group Trap, The Government Trap, The Despair Trap, and so forth.

Harry Browne was a disciple of Ludwig von Mises, who had a heavy influence on the libertarian movement in the mid-20th century. I, myself, became a disciple of Harry Browne. I applied his teachings to my life, and really did turn things around. I shook off my dependence on others and embarked on a path of self-determination. I pursued the things in life that truly made me happy. I found a successful career. I met my current wife, and we’ve had a close, loving relationship for nearly a quarter century now.

I owe a lot to Harry Browne.

In the early days of this freedom path, I was a perfervid proselyte of libertarianism. I crafted my own moral code, avoided group efforts, and regarded government with great skepticism. Harry Browne’s advice was that government does not solve any problems, and I took that to heart.

You can mine a lot of valuable gold from the libertarian philosophy. But beware of the fool’s gold. No one can be completely independent, as wonderful as that sounds in theory. Reality checks have moderated my passion. Apparently they moderated Browne, also.

Harry Browne even ran for president, winning the Libertarian Party’s nomination in 1996 and 2000. In 1996 he garnered 485,798 votes. One of those votes was mine. So he and I were both kind of caught in the Government Trap, he by running for office, and me by voting for him.

He was an investment analyst for most of his life, and developed the permanent portfolio investment strategy. It’s designed to protect your assets from large losses. However it also make spectacular gains virtually impossible.

In 1970, he authored the book How You Can Profit from the Coming Devaluation, where he accurately predicted the devaluation of the dollar, and a sharp rise in gold prices. Had you abandoned the permanent portfolio strategy and followed his advice in that particular book, you would have made a fortune.

In 1989, he authored the book The Economic Time Bomb: How You Can Profit from the Emerging Crises, where he inaccurately predicted a global economic apocalypse. Had you followed his advice in that book, you would have missed out on the skyrocketing stock market during the 1990s.

But in most of his books on investing, Browne warned about following the advice of anyone who predicts an economic downturn or upturn. He claimed that no one can consistently predict the future of any investment with accuracy, and you should calibrate your investment strategy accordingly, by diversifying.

So he fell into the very traps he warned against. And he made predictions, while advising us to beware of predictions. He was a man of contradictions, faltering on the very philosophical paths he advocated. But don’t we all?

After the September 11, 2001 terrorist attacks, Harry Browne shocked many of his followers when he wrote a column entitled When Will We Learn. It criticized our nation’s foreign policies as being a catalyst for the 9/11 attacks. He lost some of his followers over this, including the conservative radio and television personality, Larry Elder, who quit the Libertarian Party and became a Republican. Nonetheless, it became his most widely-read column.

Harry Browne succumbed to Lou Gehrig’s disease on March 1st, 2006. He was 72. He was eulogized by Congressman Ron Paul.

My life has been guided by many philosophers, but he is one of the foremost. So on this day I remember him. Keep resting in peace, Harry Browne.