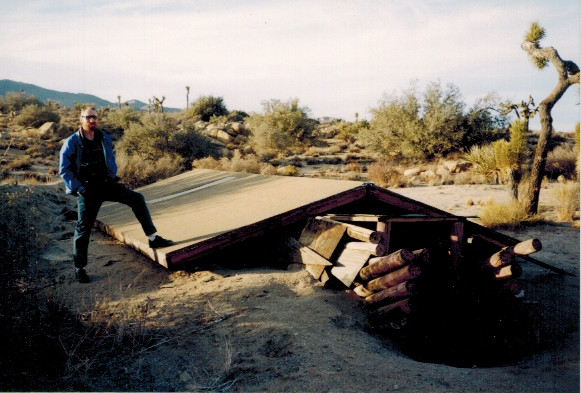 My hermitage about 10 years after I sold it. Years ago, it was razed and a modern house built over the site. Kind of symbolic.

I could have been penpals with Ted Kaczynski. At the same time the Unabomber intrigued against modern civilization while holed up in a remote Montana cabin, I too isolated myself from civilization in a remote cabin. And while Ted’s activities were of the “underground” nature, so were mine. Literally.

That’s because my cabin was built underground. Well, mostly. As you can see from the photo, it was a log cabin dugout, with a roof that protruded a few feet above ground.

I resided with scorpions in the walls and rattlesnakes under the eaves. I held out against modern society for as long as I could, in this fastness of mine, beneath the desert floor. But at least I didn’t hate modernity as much as Ted, who got the lame-brained idea of mailing bombs to those at the forefront of technological progress.

Ted Kaczynski after his capture in 1996.

These days they call what Ted and I did, “living off the grid.” But Ted wanted to do more. He wanted to get rid of the grid. That was not very brainy, especially from an erstwhile university professor. Ted grossly underestimated the scope and power of the grid.

There are all kinds of grids. There’s the electric grid, for instance. And some say if you put up solar panels, you are going off the grid. “Bushwa!” Ted would scoff, I’m sure. Because there’s also the water grid, which supplies you when you turn on the tap. There’s the internet grid, the highway grid, the grocery grid, and a whole gridiron full of grids.

A grid is any kind of modern system that supplies the masses with their wants and needs. And the grid is the insanely complex structure of modern civilization that you get when you overlay and interconnect all grids together.

It’s pretty hard to rid yourself entirely of the grid. For example, I didn’t like shooting wild critters. So I became addicted to the grocery grid. And Ted relied upon the postal grid to deliver his special packages to his victims. I wonder how thoroughly Ted pondered over that.

Things got pretty lonely for me out there on the gridless Mojave. Also my bank account was dissipating into dust. So after a few years, I sold my cabin and decamped back to civilization. I’ve been deeply embedded in the grid ever since.

I’ve learned that the grid is not the reified monster that Ted and I imagined it to be, so many years ago. Nor is it heaven on earth, as boosterish promoters of modern living might have us believe. The grid is actually just people. It’s the folks who keep the juice turned on, the water flowing, the trucks rolling, and the comestibles and consumables selling at the market. It never works perfectly, because people aren’t perfect. But with all its kludgy intricacies, somehow it usually comes through for us.

People can live cold, isolated lives in the middle of this great grid, not fully appreciating the value they receive from their neighbors and community, nor even the value they contribute back. Whether we realize it or not, we need each other very much.

The grid is very human. We are the grid.